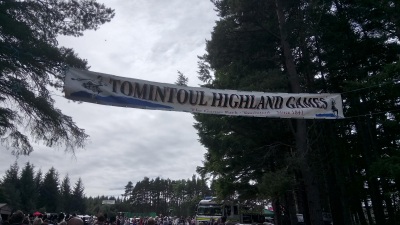 On Saturday we went to the Tomintoul Highland Games, which have been held since the early 1800’s. There is such a lovely atmosphere on any games day and there is a cacophony of sound that never lets up. Around the arena there are so many different events going on that you don’t know where to look first. The first competition we came to was the highland dancing that goes on all day, with different age groups and different dances.

In the four corners of the field there were solo piping competitions where the lone piper had to play and walk at a very slow pace around the platform.

There were various track and field events going on like long jump, sprints, and the hill race. Towards the end of the day they had the novelty events like the sack race which visitors to the games could take part in.

There were a few pipe bands that would play and march across the field in the middle of all the action. I thought that the lone pipers deserved a medal just for keeping going with their own tune when a whole band was passing by them.

This is the Ballater & District Pipe Band. 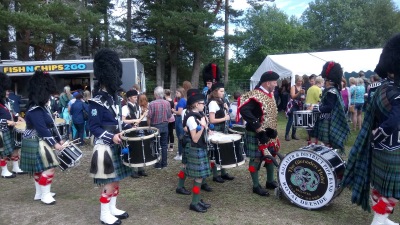 We made the decision to leave Bramble Jelly at home and I’m so glad that we did, as apart from the noise, it was a very warm day and I don’t think she would have enjoyed it. Here’s just a few of the many puppy dogs that were at the games. Lots were hiding under chairs trying to get out of the sun. 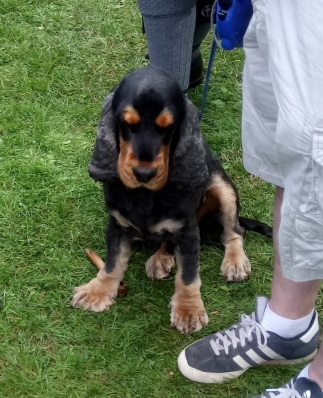 Of course one of the things that everyone goes to see is the heavy events with men in kilts throwing large objects long distances. The rules actually state that they have to wear the kilt to compete.

In the picture below the man in the middle of the picture is running with the caber (very large wooden pole) and then he will toss it. The aim is to get it to flip right over, but whilst we were watching none of them managed to achieve it.

This picture shows the craziness of what is going on in the arena. From left to right you have highland dancing, tug of war, marching pipe band, and tossing the caber.

After we’d been at the games for a while we went for a walk down the main street of Tomintoul and stopped at a cafe to have a cold drink and a sit down (there weren’t many places to sit except the ground at the games). I loved this carved wooden highland cow that was a feature in someone’s front garden that we walked past. 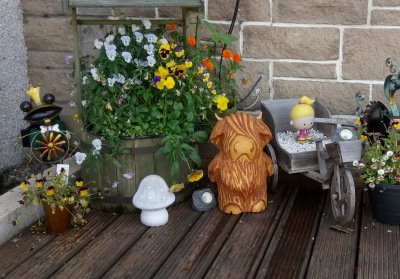 This man was sitting near us at the cafe, and as you can see, his plaited hair was down to his bottom. 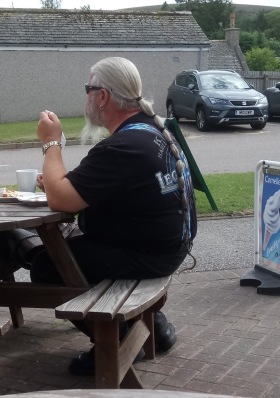 I’m just going to leave this here – it was on the wall in the cafe.

Earlier in the day when we had been watching one of the piping competitors we noticed this man having a very sound sleep on the ground beside the platform. How he could sleep with the noise that was all around him is incredible.

When we returned he was very much awake and busking near the front gate of the games, playing the electric guitar and the tin whistle. He’s a bit of a dude. 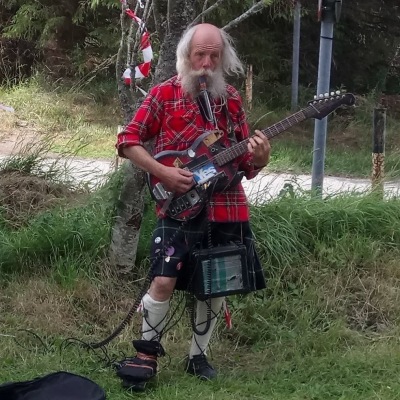 One thing that I have to do at any country show or games is have a donut or two as there’s nothing better than freshly baked ones covered in sugar – totally yummy.

Haste ye back. This is a sign that we often see on the way out of towns in Scotland and I thought it was lovely that it was on the back of the games sign so that you only saw it as you went out of the ground. In case you didn’t realise, it means to come back soon.

I hope you enjoyed your visit to the Tomintoul Highland Games – have you ever been to one?
Until next time, be good, stay safe, and do something this week, no matter how small, that will help save the planet for future generations.
Pamela & Ken
xxxxxxxxxxxx
P.S: I think this is the closest the brats have been without any hissing, growling, or general fighting going on. The reason, they were too focused on the birds outside the window as Ken had recently put bird seed out.

3 thoughts on “The Tradition & Craziness of a Highland Games”