I is for Inverness, the cultural capital of the Scottish Highlands and the nearest city to us, being 17.5 miles away – it is also the city that I work in.

Whilst it is a city, Inverness just feels like a big town and despite only living here for 16 months we rarely go into the city without me running into at least one or two people I know through work. I tell Ken it’s because I’m a local now.

The castle that overlooks the River Ness is not the original, in fact it’s probably the third castle that has stood there. One of the much earlier castles is where Shakespeare’s Macbeth set the murder of Duncan and this castle was destroyed by Robert the Bruce in the 1300’s. The next castle that stood there was blown up by the Jacobites in the same year as the Battle of Culloden, killing the demolition expert and his dog – I love that they mention the dog on the information boards. 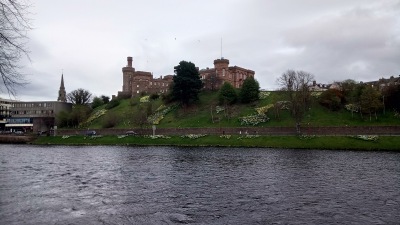 Looking down the River Ness. 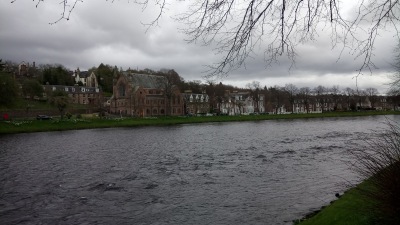 St Andrew’s Cathedral which was opened in 1869 – it’s a beautiful building and is an Episcopal Church. It was the first new cathedral built after the reformation. 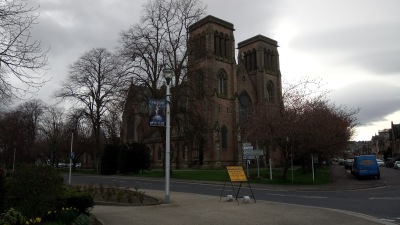 Inside the cathedral followed by a picture of the angel font which is gorgeous. 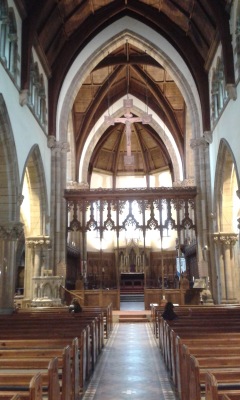 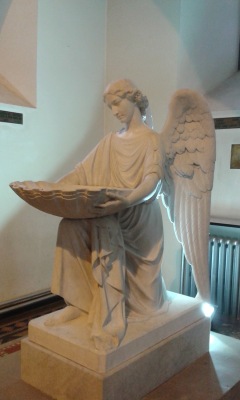 There is a wonderful second hand bookshop, Leakey’s, on Church Street that is a must visit – I’ve written about it before in Old Books, Cake, and animal selfies if you’d like to read more about it. The shop has over 100,000 books and it would be easy to spend hours there. 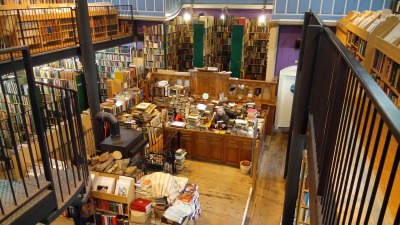 One of my favourite shops that I’ve never even been in is this Highland Souvenirs shop – it just amuses me as it’s really small compared to a lot of shops around it, there’s bagpipe music being played out into the street from speakers, and there’s a fake owl sitting at the top window. What more could you want in a souvenir shop.

Around Inverness if you look down as you walk around you’ll find more than just paving stones beneath your feet. Lots of the manhole covers have a pretty pattern and quotes about the weather written on them – “There is no such thing as bad weather, only different kinds of good weather”. 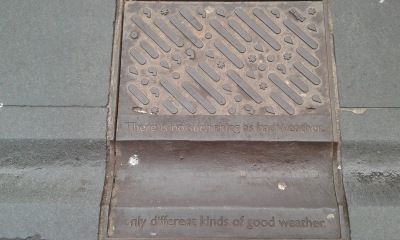 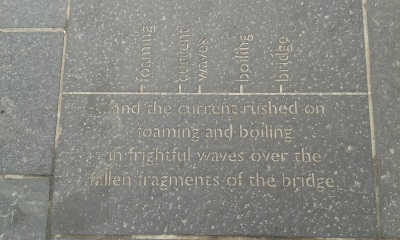 There are lots of good places to eat in the city, including a lovely vegetarian cafe called Nourish, and the wonderful So Coco which serves scrummy churros (see below). There are lots of great restaurants which include Bella Italia, The Mustard Seed, and Aspendos.

Statue of a bird of prey which sits in the entrance of the Eastgate shopping centre.

At Christmas time the banks of the River Ness are lined with colourful lights and the trees have fairy lights in them. It makes the city look really cheerful despite the cold and often wet weather.

This is the beautiful Christmas tree that graced Falcon Square – I liked it because it also had purple in the lights though you can’t tell that in the photo. 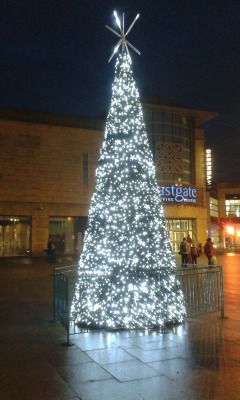 That is Inverness and the letter I. Before you go, why don’t you pop over to the A to Z blog to see what my fellow bloggers have come up with – click HERE to visit.

Until next time, be good, stay safe, and take a moment to appreciate the place that you live.

13 thoughts on “I is for Inverness”