This weekend has been spent exploring early Christmas markets (it is still November) and more of the beautiful highlands. Yesterday we went to Forres as there was a Christmas craft fair on and we just wanted to have a bit of a mooch around.
This door was near the carpark and whilst Ken thought it was a bit boring, I really liked the colour of it. It reminds me of the blue that is used a lot in Greece.

First order of business was breakfast/lunch. No prizes for guessing that Ken had the sensible lunch of soup and a sandwich whilst I had pancakes with fruit, yoghurt, and maple syrup – yum. 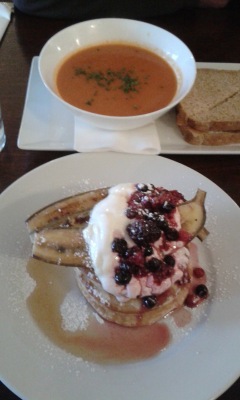 The craft fair was very sweet and I bought a lovely material heart to hang in the house. In the stairwell there was this very tall chair – what you can’t tell because of the angle is that my feet are several inches off the floor. A rare occasion for me not to be able to touch the floor.

One of the shops that we walked past had a lovely Christmas display in their window. 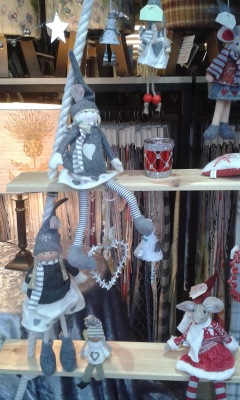 We then went across to St Laurence Parish Church which is a huge building and quite modern for the area being built in the early 1900’s. The graveyard shows that there were much older churches on the site as the graves date back to the early 1800’s, and a lot have been laid up around the wall – probably because the new church took over part of the graveyard.

Ken wondered whether this ladies parents originally wanted a boy as Donaldina is quite an unusual name.

I liked how on this headstone they’ve made the stone ripple like a real scroll.

Looking across the very crammed together headstones. 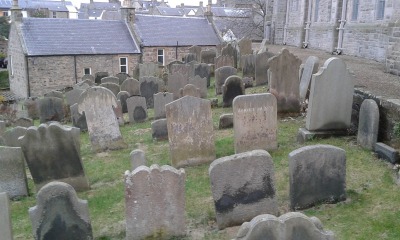 This headstone is quite intriguing as it just has the year and then, J – A = S. It’s almost like something out of the Da Vinci Code.

Few more shots of the graveyard. 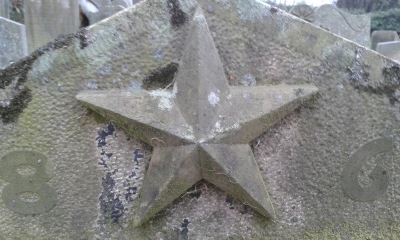 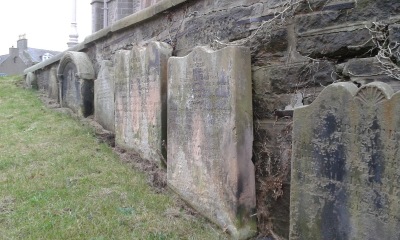 Beautiful flowers in a whiskey barrel at the front of the church.

Very interesting garden at the rear of a large house which has been made into apartments. Lots of unusual features – tribal masks, shells, stones, headless bodies, and some plants.

Today we headed to Fochabers and the Baxters Factory and shopping village as Santa was arriving today – why he’s here in November is even baffling to me. We missed Santa’s arrival but we still enjoyed having a look around. This stunning trike below was there for people to have a look at and lots of kids were getting their photos taken on it. We had a chat to the owner as we admired all the really cool little details. For those that are wondering, it is a Rewaco trike, which is a German company. 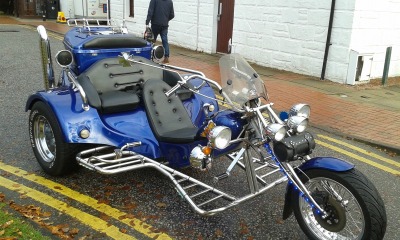 The gear stick on the trike was a snake, and the eyes were lights that flashed at us.

I loved the paintwork, it’s a bit like a ripped skin effect tattoo – the owner is letting everyone know that under everything he’s a true Scotsman.

Note the mirrors in the shape of an iron cross, which is a famous Prussian and then German military medal. 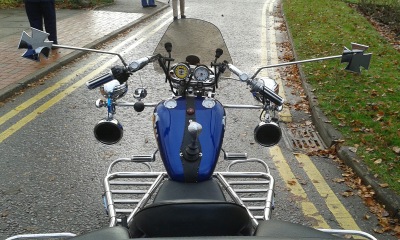 The stag in front of the Baxters village had been turned into Rudolph for the event.

Craft stalls in the courtyard and just to annoy Ken they had Christmas songs blasting through speakers so he couldn’t escape them. 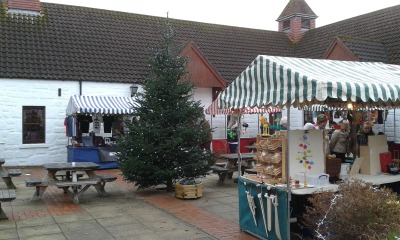 Almost life size Santa at the entrance to the food hall – he’s got such a lovely face and I love his shoes.

There were some great displays in the food hall – these tea tins are gorgeous.

As expected in a Baxters shop there was a lot of soup for sale. 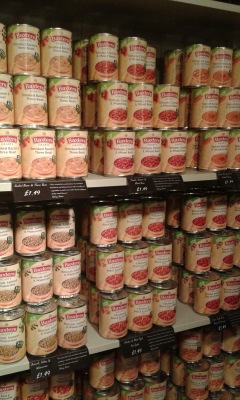 Loved these biscuit tins – so cute.

This tin of fudge is beautiful – love this design with the snow and the moon and stars around a reindeer. 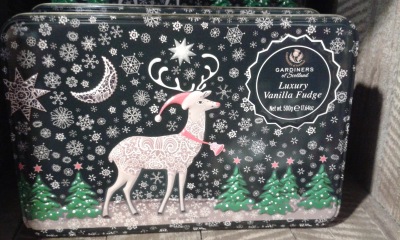 Merchandise displayed around an old fireplace.

Next stop was the whiskey shop. Part of the Christmas festivities was a treasure trail for children which involved finding elves in the various shops – and yes there was one in amongst the whiskey. The names of these two whiskeys really amused me as they don’t sound very appetising. 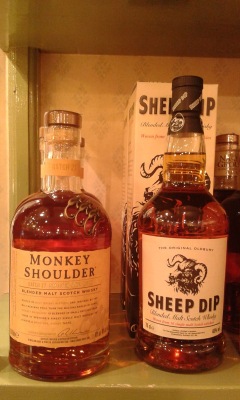 I then wandered into the Christmas shop which was beautiful – I’m a sucker for Christmas decorations, and the more fairy lights there are the better. 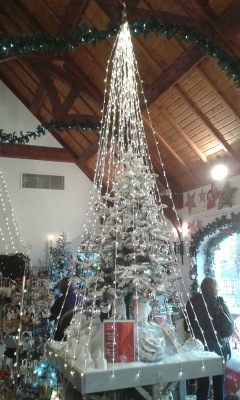 The animals below were all moving as this was the entrance to santa’s grotto where children were meeting the big man and getting a present from him. I was tempted to buy a ticket and queue to meet Santa but I thought I might get too many strange looks.

After the fun of Christmas decorations we needed sustenance so we went into Fochabers and stopped at Eats and Treats for a late lunch (I should add here that whilst I was in the Christmas shop my beloved ate four donuts!!).

The shop is absolutely fabulous with very eclectic decorations, second hand books for a donation, and scrummy food. 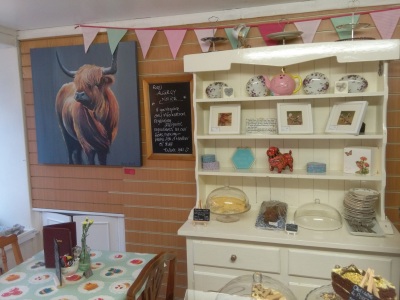 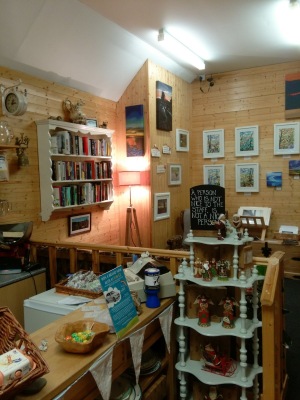 After refueling we went to Spey Bay so that Bramble Jelly could have a run and the sun was starting to set at 3:30pm.

There was lots of driftwood on the stony beach so a good place to go if any craft projects come up that require wood. It took us ages to get Bramble to pose for this picture – she’s not very good at staying and looking at us at the same time.

Some previous visitors to the bay had been very creative and created fish shapes with stones. There were also lots of lovely piles of stones around the grassed area. 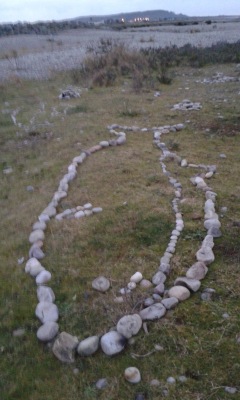 So that was our weekend of exploring and getting more into the Christmas spirit. Here’s a picture of the two new tree decorations I bought at Baxters – I thought it was quite fitting for us to have a cup of coffee and a cake on the tree. 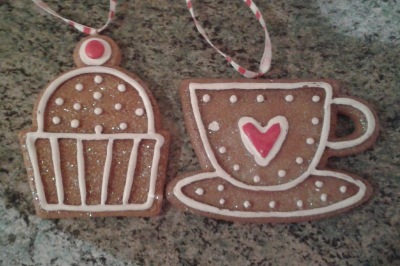 Until next time, be good, stay safe, and have a fabulous week.
Pamela & Ken
xxxxxxxxxxxx
P.S: Final picture is Princess Cookie lounging on my dressing gown – she doesn’t get to feature in the blog very often so she told me I had to put her in this post.

Fungi photographed by my beloved.🍄🍄
Had a lovely visit to @waspsstudios Inverness at the weekend. Fabulous art by David Fallow, especially the world leaders - this collection is called the good, the bad, and the really quite ugly. Going to the dogs includes great paintings reimagined as dogs.
Our beautiful senior citizen. 💜
Loving my new bookends that we found at the recycling centre and then upcycled with beautiful turquoise and sparkly eyes. 💜
Reposted from @pangolincrisis
Love that face. 💜
Found the lovely 3 bridges cafe at Tomatin this weekend. Love the cow seat and the hanging baskets were gorgeous. Great food and fabulous view - the vegan carrot cake was scrummy. 🍰
Love all the flower baskets in Forres - so pretty and cheerful.
Ran into some fellow Australians today at the recycling centre. 🇦🇺
Lovely day out at Carve Carrbridge, the chainsaw carving championships. The sculptures were amazing - for the people's choice Ken voted for the gnome and I voted for Asterix.
The breathtaking scenery of the Highlands and a friendly sheep. 🐑
Day 31 of @thesealeychallenge - Ink Knows No Borders, Poems of the Immigrant and Refugee Experience - edited by Patrice Vecchione and Alyssa Raymond.