Whilst in Northumberland we had a lovely day out to the Chain Bridge Honey Farm which sits right at the edge of England in the north east. The honey farm was opened in the 1940’s and is a great place to visit, especially for vintage vehicle fanatics like my beloved as there are lots of old vehicles dotted around the place. 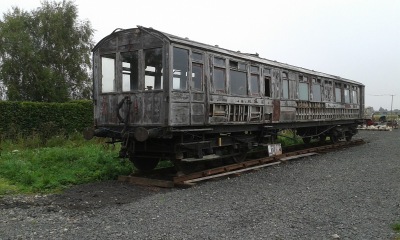 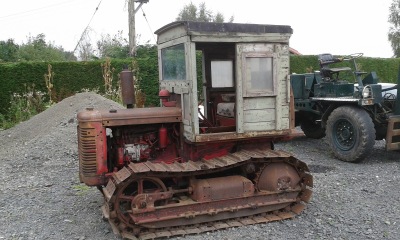 There is also a big shed with lots of old things inside – this is an old butter churn.

One corner was set up like an old shop with very old tins which I’m sure would not be pleasant if you opened them.

On the counter was this original copy of a magazine from 1912 which had things in it that today seem very odd for us but must have been very normal back then.

This is one of the adds in the magazine and my favourite thing in it is that there is a chapter on answering the door. 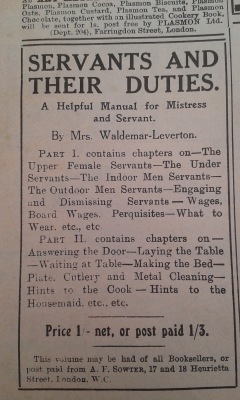 Lots of different things that you would find in an old kitchen – love the old pots and pans but most of them I can’t even lift up because they are so heavy.

Old tractors – you can feel my husband getting more interested now. It was about at this point that another couple that were wandering around stopped and spoke to us, well me to start with. The couple were from Yorkshire and to me they may as well have been from outer Mongolia for all that I understood – I just nodded and smiled and then became very distracted by an old tractor, leaving Ken to talk to them. Typically we kept running into them as we walked around the farm and I had to trust that Ken would do the talking as they had the broadest Yorkshire accent that I have ever heard.

This large painting was in one of the sheds – the reason I took a photo of it was that the cat reminded me of Tiddles who was my cat growing up. 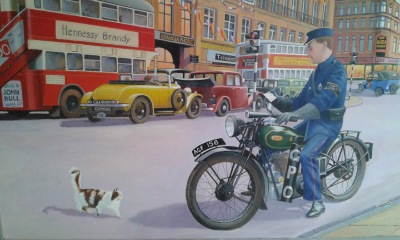 This was one of the honey farm working vehicles which was covered in bees! There must have been remnants of honey on the trailer as there were lots of bees all over the back. This led us to wonder how often the workers get stung by the bees and if visitors get stung very often?

The cafe for the farm was based in this lovely old double decker bus with tables upstairs and the kitchen downstairs. There was one table downstairs so we sat there – to enjoy the view of the cakes. 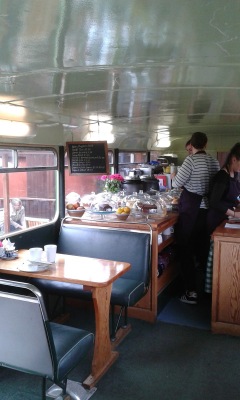 Very, very scrummy cakes which all had honey incorporated into them.

In the visitor centre there is lots about the history of honey making and there were lots of really interesting facts. I liked this collection of honey pots as I’ve seen a few interesting ones over the years and in different countries.

The facts on this poster really did my head in – one litre of honey requires 10,000 hours of flying!! The bees wings must be very tired. Typically the worker bees are females and the males (drones) are back in the hive getting jiggy with the queen.

Look at this fantastic knitted chain bridge (you’ll see the real one shortly) – if you look closely you’ll see that there are swans and canoeists in the river which is great attention to detail. 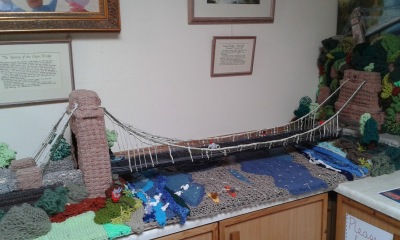 One of the doors in the visitor centre has this beautiful scene painted on it – it looks like a really nice place to sit and have a cup of coffee with the friendly cat keeping you company.

This is a traditional bee skep, which have been used for centuries to keep bees in.

Being an avid reader I really loved this quote by James Russell Lowell.

After our look around the honey farm we walked down to the Chain Bridge which connects England to Scotland.
‘The Union Chain Bridge spans the River Tweed between Horncliffe, Northumberland, England and Fishwick, Borders, Scotland………When it opened in 1820 it was the longest wrought iron suspension bridge in the world with a span of 137 metres (449 ft), and the first vehicular bridge of its type in the United Kingdom. It cost £7,700 to construct…’ (http://www.visitnorthumberland.com/historic-sites/union-chain-bridge&ssid=827) 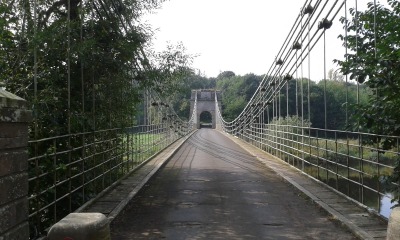 View from the bridge – you can’t see him but there was a man standing in the middle of the river up to his waist and he was bothering the fish (fly fishing). 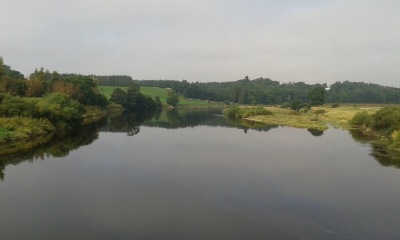 The next two photos demonstrate something that Ken wants me to point out. As you walk across the bridge into England this is the sign that greets you – just the word England. 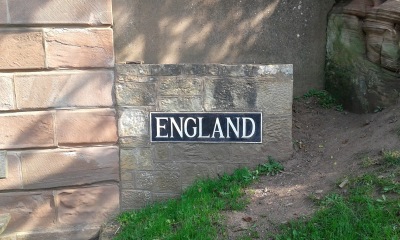 As you walk across the bridge into Scotland these are the signs that welcome you, which to Ken reaffirms his belief that the Scots are much friendlier than the English. I’m staying neutral as I’m not from either country, but it definitely felt nicer walking into Scotland.

Pretty house over the border into Scotland.

Ken and Bramble on the bridge. 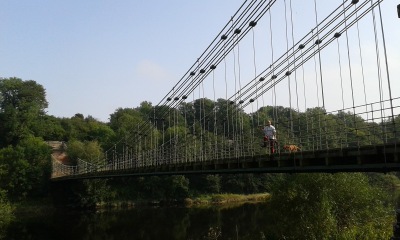 After walking across we went back and got the car to drive across the bridge on our way to Dunns and a visit to the Jim Clark Rooms – future blog post. As you can see, Monkey had a prime position for the crossing. 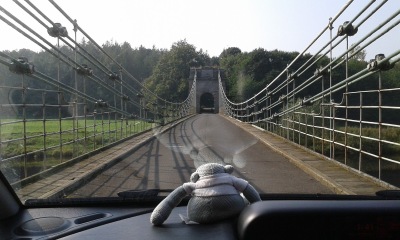 That was our day out to the honey farm and chain bridge. Until next time, be good, stay safe, and have a really lovely week.

P.S: Final picture is a very tired Bramble (Jelly Sassy Pants) when we got back to our holiday cottage.