Top ten Thursdays is here again and a subject after my own heart – food, and Italian food to be specific. So many options and some may be a little surprising. I love Italian food and have very fond memories of the Rialto Restaurant in Burnie, Tasmania – the city I did my nurse training in and the Rialto was somewhere we often went for meals.
Without further ado, here is my list from ten down to my number one.
10: Kinder Surprise eggs – shocked? These are in my list more for what they represent than for their flavour. At Christmas time we create our own advent calendars for each other and we often put kinder eggs in them and we always make the creations inside and revert to childhood. We have been known to keep the little toys on display for months. There is a little green monster hanging in our lounge now, and last year we had three flower princesses in pride of place in front of the tv for months – Ken used to rearrange them whenever he dusted.
My beloved was quite surprised to find out they were from Italy as the name sounds more like they come from Germany. I double checked my facts with Mr Google and yes they do indeed come from Italy, being made by a wonderful company named Ferrero (you may hear that name again in my top ten). An interesting fact for you, Kinder Surprise are banned in the USA because of the small parts concealed in a confectionary. 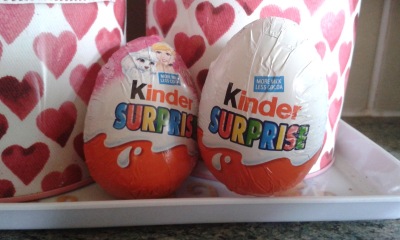 9: Balsamic Vinegar – a sweet syrupy vinegar that is made from reduced grape juice and then aged in wooden casks, almost like wine. It can be an acquired taste but I’m now a big fan as it can make the most boring salad scrummy and is also really lovely on strawberries (yes, still as crazy as ever). You can make a really easy salad dressing with it by mixing it with some olive oil and seasoning, or just dash it on by itself.

8: Prosecco – the bubbly you have when you’re not having champagne and another drink that I’ve only really taken to in the last couple of years. There’s a lot of differences between Prosecco and Champagne, not least that one is from Italy and the other France, but more importantly the price with Prosecco being much more affordable. Champagne has also been around a lot longer than Prosecco, being first produced in 1693 and Prosecco was first made in 1868. 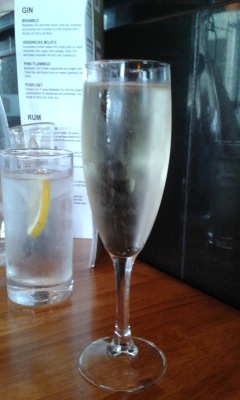 7: Olives – all shapes, sizes, and colours. These are yet more proof of our tastebuds changing as we mature (get old and wrinkly) as I used to hate olives and would pick them off pizzas (another Italian food that I love but didn’t make it into the list) if anyone else had ordered them. I now love them but it was a gradual thing with black olives gaining my favour first and now I eat all of them.

6: Garlic – I can hear the protests from here. I’m not suggesting for one moment that garlic originates in Italy but the Romans did introduce it to the UK, so next time someone asks you “what did the Romans ever do for us?” you can reply that they gave us garlic. 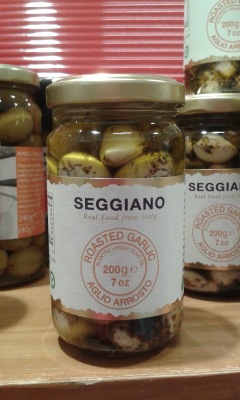 5: Pasta – quintessentially Italian. Think Italian food and most people would say Pizza and Pasta as the two foods that they think of when you say Italian. Such a versatile dish which can be smothered in a creamy sauce like the mushroom pasta dish below (it was scrumptious) or simply served with olive oil and prawns.

4: Pinot Grigio – white or rose, I’m not fussy. One of my favourite types of wine as it’s so crisp and refreshing and goes with most food if, like me, you’re not a posh wine fancier.

3: Ice Cream – you’re right, it didn’t originate in Italy but the Italians are really the people that spread it to the world after a much simpler version of it was brought from China by Marco Polo, and we thank them for it. Ice Cream is just the perfect dessert, a simple scoop of vanilla, or as part of a huge banana split or as the perfect accompaniment to a stodgy sponge pudding. My favourite flavour changes regularly as I think it depends what mood you’re in, but one of my favourites is coconut.
Scotland especially has to thank the Italians for Ice Cream as lots of Italians came to Scotland at the beginning of the 1900’s and started selling this new treat to the Scots. Even now there are still so many Ice Cream cafe’s, and businesses that are part of the Italian heritage, with some of the best known being Nardini’s, Jannetta’s, Equi’s, Pieri’s, and Giacopazzi’s. 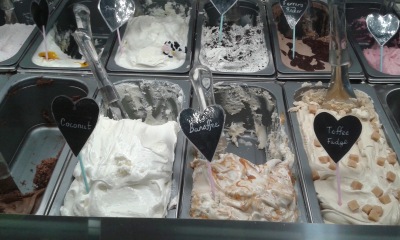 Down to the top two of my list and I debated this for ages, and I had to resort to my being on a desert island strategy again to decide which one was the numero uno for me (see what I did there, speaking in Italian).
2: Ferrero Rocher – those little golden balls of loveliness. The person we have to thank for these is a gentleman called Pietro Ferrero who started making hazelnut and cocoa based products in 1942 – I think there should be a national day for this genious. My beloved is so wonderful and will surprise me with a box of these every now and then, and at Christmas time he always buys me these as well as Raffaello which are the white treats from Ferrero covered in coconut – scrummy.

1: Caffe Latte (Milk coffee) – or as I often call it, the elixir of life as it can perform miracles of a morning and actually turn me into a person able to function in the world. I try and restrain myself from having too many as I used to be a real caffeine addict when I lived in Sydney, but now I try and keep my coffees to three or four a day. I tend to get quite well known by my coffee shops and when I left one of my jobs a few years ago I even got a leaving card from the Costa Coffee team in the hospital. I think their profits dropped dramatically without me there.

So there you have it, my top ten of Italian foods that are delizioso!! The one’s that missed out, but only by a cat’s whisker, were Risotto, Pizza, and Tiramisu.
Make sure you pop over to Tamara’s blog, Confessions of a part-time working mom to see what others have chosen for their top ten – click HERE to visit.
Until next time, be good, stay safe, and eat something Italian this week.
Pamela & Ken
xxxxxxxxxxxx