Recently we went for a day trip to Dufftown which is in the north east of Scotland and has a very long history with a Christian community being established there in 566 AD. It’s not a very big town but is very important in the Whiskey industry having nine distilleries. Before the most recent two distilleries were built there used to be a saying: Rome was built on seven hills, Dufftown stands on seven stills.

When we parked we were given a very warm welcome by one of the local cats – he was very friendly and we had a nice chat.

We had a wander around the town and I liked this old building as it looks like a real fixer upper in the middle of all the houses – it just needs some love.

The town clock tower which was built in 1839 and was originally the town jail.

Like a lot of towns in the highlands there are beautiful floral displays throughout and the hanging baskets in Dufftown were stunning.

After stopping for cake we then went to discover the Giant’s Chair which was signposted as a half mile walk, so off we went with Bramble having fun running alongside the river. Below is one of the distilleries that use the water from the incredibly clear river. 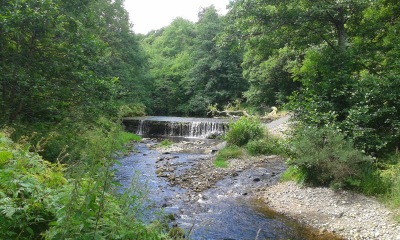 At a picnic spot we found these three rocks which have words carved into them about native plants.

Me and Bramble Jelly – she’s getting longer but she still hasn’t grown into her very big paws. It was about at this point, after a couple of hills, that I had my usual meltdown mid walk and told Ken he’d have to get a helicopter to fly me out – It’s not a good walk unless I get like this, as it shows I’ve had to exert myself.

What we discovered after our walk was that the Giants Chair is the shape of the valley that the river runs through and not an actual chair. We decided that this was our Giant’s Chair as we’d walked over half a mile by this point. 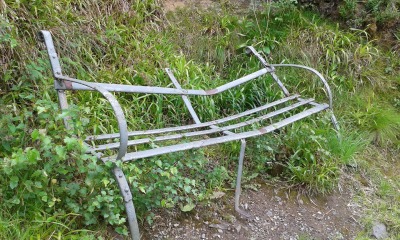 Ken trying to convince Bramble to go in the river – she got her feet wet but wasn’t very impressed by that. 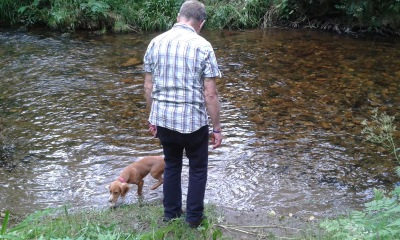 Bramble sitting pretty amongst the wildflowers.

All around the town there is evidence of the whiskey industry including this mini still and flowers in whiskey barrels. 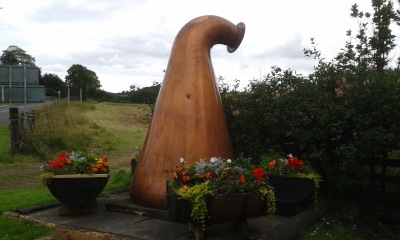 Our next stop was at the Glenfiddich distillery which is a very famous name in whiskey making. These interesting trees were next to the carpark – they are made out of scrap wood.

The Glenfiddich distillery was established in 1887 and is still family run – I really don’t like whiskey, even the smell puts me off, but I have heard of Glenfiddich. 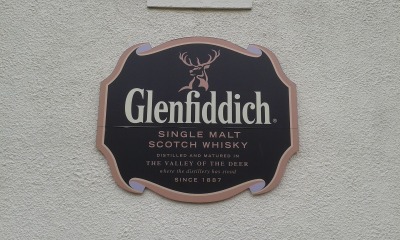 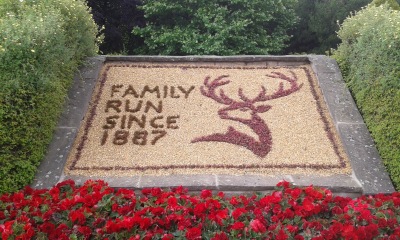 The distillery has beautiful grounds with lovely flowers around the buildings and lots to see even without doing a tour.

Water fountain shaped like a distillery – and yes, there was money in there but I couldn’t see any Aussie coins.

The symbol of Glenfiddich whiskey is the stag and this statue was very commanding – I tried to get Ken to pose with him but no luck. 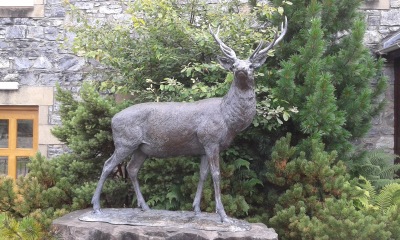 The whiskey behind the bar where we had lunch in the Glenfiddich cafe.

Now I know some of you probably think I’m a bit weird, especially when I take photos of toilets. WARNING – the next three photos are taken in the ladies toilets at the distillery and I have to say it’s one of the nicest toilets I’ve ever been in – very, very posh. 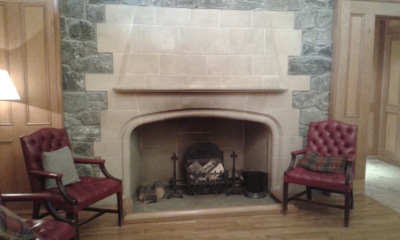 A bottle of fifty year aged whiskey which is £22,850 – that’s ridiculously expensive. The bottle is hand finished in silver and is encased in a leather box.

Guess who wanted me to take a picture of this old truck – my vehicles expert tell me that this is a Thames Trader.

Looking in at the stills – the smell of the distilling is very strong.

As we drove away from Glenfiddich distillery we came across the Speyside Cooperage where the whiskey barrels are made.

All through the grounds are little picnic huts made out of huge barrels – these are from France and would have held wine in a previous life. 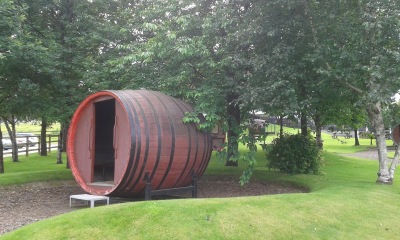 Lots of old barrels being used as planters. 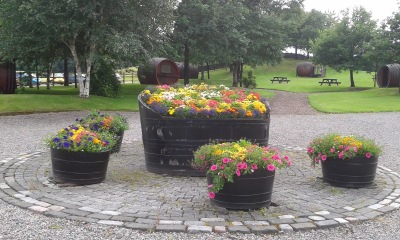 The flowers are so beautiful. 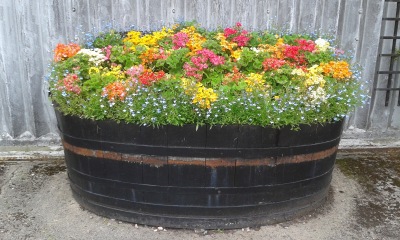 Another old truck – this one is a Fordson (we think).

The decor in the cafe, both inside and out, was fabulous with seats and tables made out of old barrels.

We sat here for a bit just to have a drink – I also tried some whiskey as they had tasters and was told it was a sweet honey flavour. I managed one sip and that was enough to tell me that no amount of honey could mask the disgusting whiskey flavour – my taste buds just don’t get the fascination with this drink. 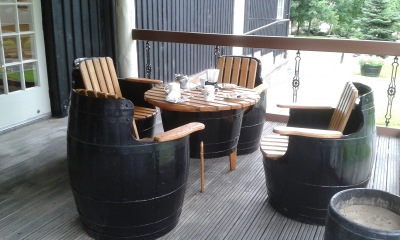 And look at his excited little face when he sat in the barrel train. 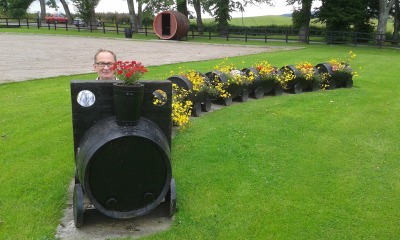 We discovered the Craigellachie Bridge as we were driving along – it was just off the main road so we stopped to have a wander and let Bramble have a play. It’s a Thomas Telford bridge spanning the river Spey and is the oldest surviving cast iron bridge in Scotland.

I love the start of the bridge – they look like giant chess pieces. As you can see by the bollard you are not allowed to drive over it anymore.

As we walked along the riverbank I found this great rock that whilst a bit heart shaped I think it actually looks more like Tasmania, so of course it came home with me and now sits at our front door. 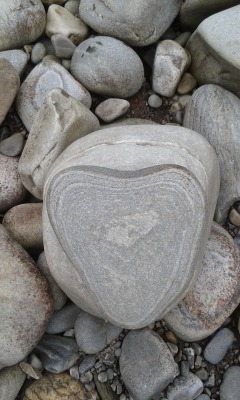 That’s it for our trip to Dufftown and the surrounding area. Until next time, be good, stay safe, and be kind to yourself and others.

4 thoughts on “Dufftown – home to whiskey”