I’ve just had a lovely week off so there’s several blogs to come of our adventures on the west coast of Scotland. This post is just going to cover our journey to our destination of Ardrishaig which is where we stayed. We traveled down the A82 to go through Glencoe, which is one of the most stunning bits of scenery in Scotland – that’s saying something as the whole country is scenic.

Glen means valley and Glencoe is a long valley that is surrounded by rugged mountains that make you feel very small.

It’s very popular with tourists and at regular points along the road there are spots to pull off for walkers to leave their cars and for people to take photographs. The car park below is always very full of cars – this is just part of it, and there is usually a piper there for the tourists but I think he was having a day off when we were there.

Lots of the young people were taking selfies with the mountains behind them so we thought we should as well, as we’re very young (at heart). (The very observant amongst you may notice that I’ve finally gotten rid of my grey hair for a while). 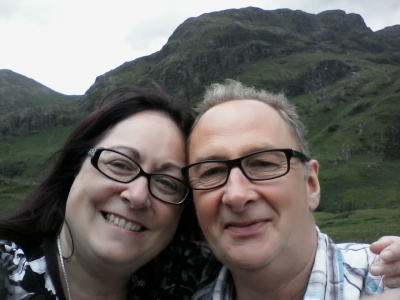 Lovely waterfall by the road – the photo below that shows a man down in the pond trying to get the perfect shot. I know a few people that would do that, in fact too many to mention here as I seem to be friends with and related to many photographers. 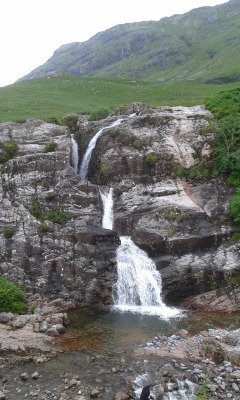 If you’ve read some of our previous posts you may have seen the phenomenon of people putting locks on bridges and railings to show they’ve been their or to highlight their love and yes it has made it to the wilds of Scotland as there were locks all along the bottom of the railing overlooking the waterfall. 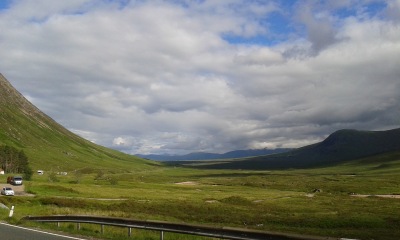 We stopped in an area where there were only a couple of cars so that Ken could take Bramble for a walk whilst I sat on a convenient bench and enjoyed the view. If you have really good eyesight you might be able to spot Ken in the picture below. Imagine what it must be like living in that house in the middle of winter – you’d have to make sure that you have lots of supplies just in case.

The next few photos are one’s that my beloved took when he got down to the river – shows the mountains from a different angle and how breathtaking the landscape is. 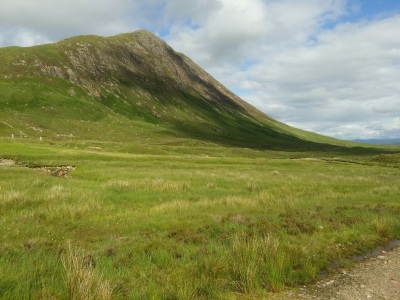 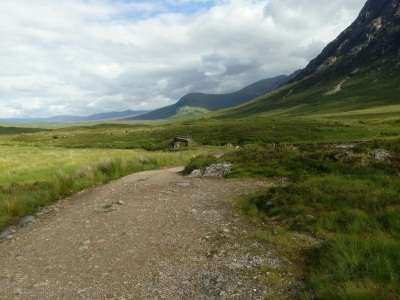 This is his arty shot – wild foxglove with the mountains behind. 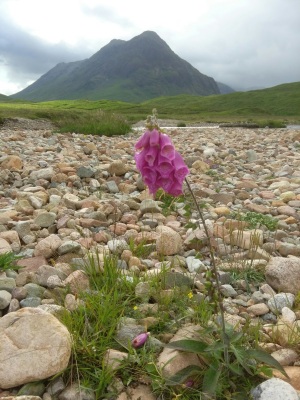 Final shot of the valley before we left it. There is a lot of history in these hills but probably the most famous is the massacre of the MacDonalds by the Campbells in 1692 and if you’d like to know more about it click HERE to read more. Basically it was a very dodgy episode in Scottish history that once again was the English trying to get rid of any rebellious Scots. The valley has also been used in lots of films including Highlander, Braveheart, Monty Pythons Holy Grail, and more recently Harry Potter.

We finally reached our destination of Ardrishaig in Argyll which is a small town at the end of the Crinan Canal, and before the canal was built in the late 1700’s there were only 4 houses there. The canal is now only used for recreational purposes but the harbour at Ardrishaig has an important role to play in the timber industry and the evening we arrived there was a ship docking to be loaded with logs. 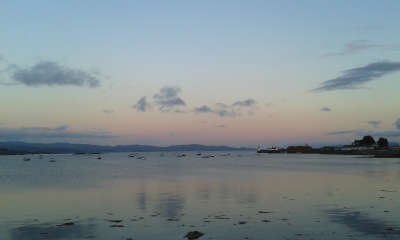 The hotel we stayed at was just below the canal so it was a perfect spot to walk Bramble – the photos below were taken after 10pm so that’s why they’re a little dusky.

Lovely tiny pink orchard that was growing wild beside the path – it’s about the size of my middle finger. 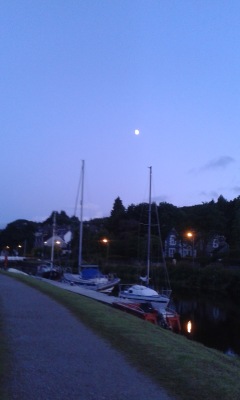 Pretty shot of the canal to finish – the water was so calm and we hoped it was a sign of good things to come with the weather for the next few days. 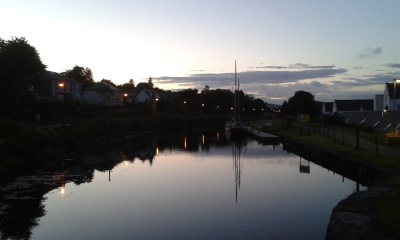 So that was day one of our short break to Argyll – there is much more to share so until then be good, stay safe, and have a really good week.

3 thoughts on “The incredible majesty of Glencoe”