Early in Spring we stopped at Brodie Castle for a wander as it’s quite close to Nairn where we live. It’s a 16th century castle set in a 71 hectare estate. As it was quite late in the day we decided not to go through the castle, leaving that for another day and instead had a look around the gardens and woods. There may have also been a stop for cake in the cafe but as there’s no photographic evidence we’ll ignore that. 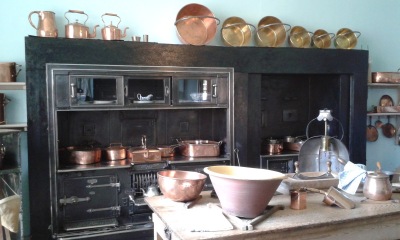 This was the butter room with the churns and pottery bowls to put it into – because of the way the room was set up it was cooler than the the other rooms. It reminded me of home as I used to love helping mum churn the butter when I was little.

There is a huge walled garden that the National Trust is slowly turning back into the garden it would have been. I did my usual thing, touching the walls and picturing the people that have been before.

A lovely old door to feed my obsession.

Beautiful frilly tulips, one of my favourite spring flowers and my beloved always buys them to put around the house when they are in season.

More pictures of the garden for you to enjoy. 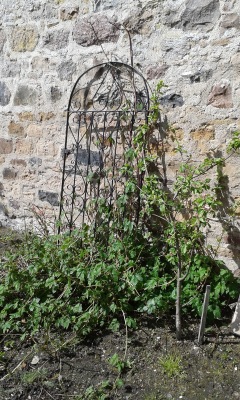 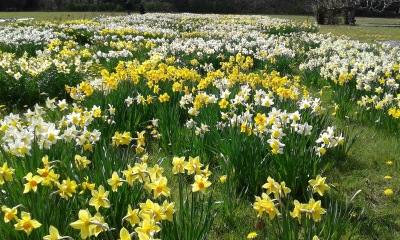 They have a lot of daffodils in the walled garden which we presumed they sell and provided a perfect backdrop for our selfie. 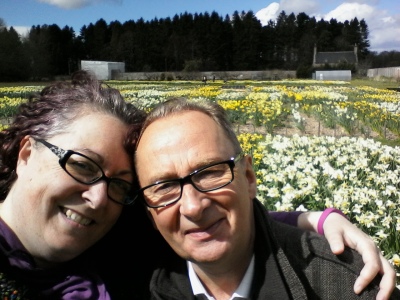 In one of the flower beds there are daffodils with the year they roughly originated in – the one below is pre 1869. (sorry for the bit of my finger in the corner of the picture but I was trying to balance down low). 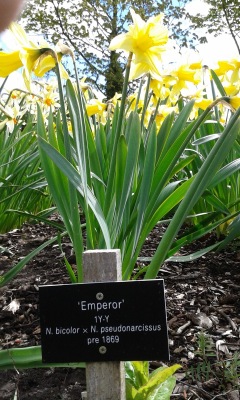 More shots from around the garden where there are lots of rhododendron plants that are very old and overgrown. 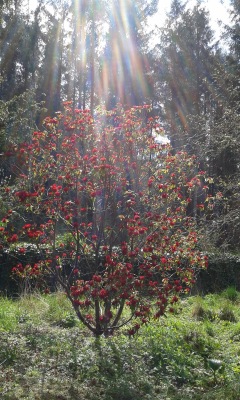 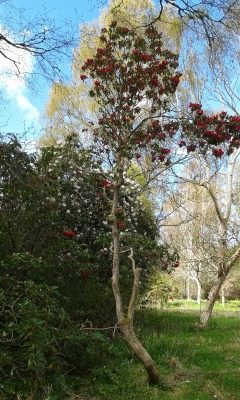 The castle from the side – it’s a proper princess castle as it’s got several lovely turrets.

We then went for a walk down to the very large pond and the the woods that surround it. 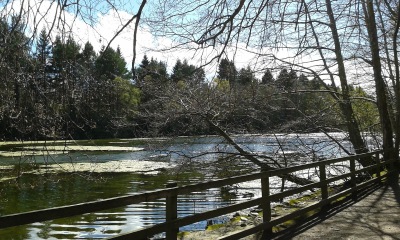 We found another geocache and I claimed the little girl with the rainbow hair – this could become a habit. 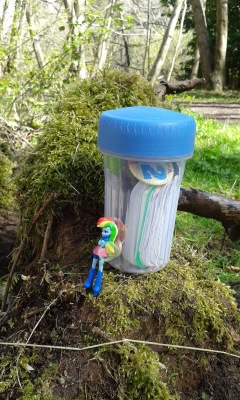 In the woods we were fortunate enough to find the Clan Brodie graveyard – how wonderful, except for the fact the gates are kept locked. It’s in such a peaceful spot with no roads and surrounded by nature – a fine spot for a final resting space. 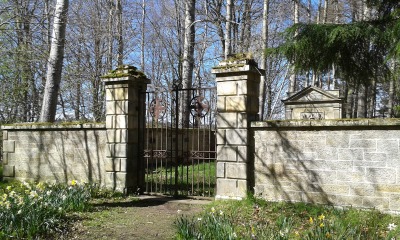 This is me extreme tree hugging as I thought this tree probably doesn’t get many hugs because of it’s awkward angle over the water. Some other visitors had a bit of a chuckle when my attempt at getting upright again resulted in Ken having to help me otherwise I would have ended up in the water.

This is my arty shot of the day – a broken branch off one of the trees dying amongst the daffodils that are the sign of new life beginning. 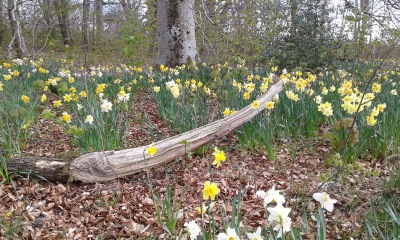 Hope you’ve enjoyed this visit to the grounds of Brodie Castle and we will go back in the future to have a look inside.

Until next time, be good, stay safe, and do something this week that nourishes your soul.

Beautiful day for a wander around @logiefarmandgarden
Beautiful Bramble Jelly. 💜
Love this time of the year when all the rhodos are coming out in the garden. 💜
Reposted from @pangolincrisis Pangolins are scaly enigmas that fascinate people of all ages. All eight species of pangolins are threatened with extinction. But it's not too late to save them.
Gorgeous horses that we pass to and from work - often stopping to have a chat. 💜
Gorgeous day in the Highlands, perfect for a walk on the beach at Rosemarkie. ☀️💜
Gorgeous afternoon at @gordoncastlewalledgarden where everything is looking beautiful. 💜
Wonderful afternoon at @pluscardenabbey listening to music inspired by the #bookofdeer . 🎶🎶
Bramble Jelly Sassy Pants not loving the cone of shame. 💜
Bramble Jelly trying to look tough (she ran through a charred bush) with her fake scar. 🤟💪
Reposted from @savepangolinsofficial
The brats looking like butter wouldn't melt in their mouths. 💜