More of our short break in Argyll – the reason we had chosen this area is that this is where my beloved grew up and we hadn’t visited the area for many years. We woke up on the Thursday morning to glorious sunshine and blue skies which was wonderful for a day of exploring and rediscovering the area.

Our first stop for the morning was to Achnabreac Cemetery to pay our respects to Ken’s mum and dad and whilst we were there you know I had to have a wander around to look at the variety of headstones. I can’t tell you how much I love this first one with the kangaroo on it – the inscription reads; “beloved wife and great mate and cobber…” How fabulous is that? Donald received his OBE in the 1976 new year’s day honors. I also love the fact that someone has left a little rugby ball by the grave.

This is the grave of an unknown sailor of the second world war – as it states on the headstone, known unto God. 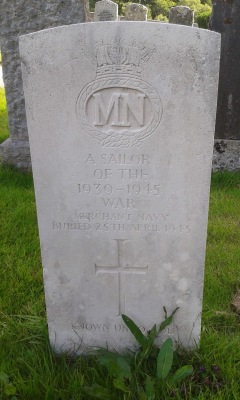 In the corner of the cemetery there is a huge monkey puzzle tree. I looked up my good friend google and several websites agreed that the monkey puzzle takes 10 to 15 years to grow above grass height and then it grows very slowly at a rate of about 35cm a year – that means that this tree is very, very, very old. 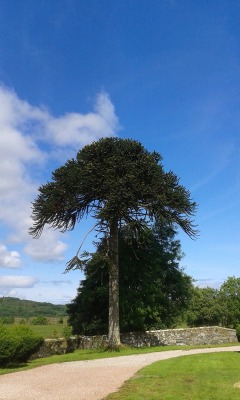 Our next stop was Crinan which is at the end of the Crinan Canal (funny that). It’s a lovely spot especially when the sun is shining. 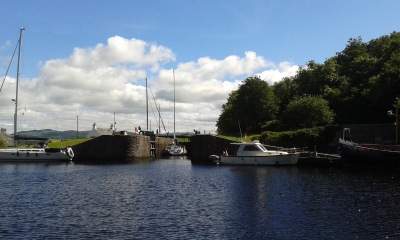 Ken and Bramble enjoying a cake break in the sun – as usual we had lots of people stop to make a fuss of Bramble Jelly as she’s the cutest little puppy in the world, but then I’m biased. 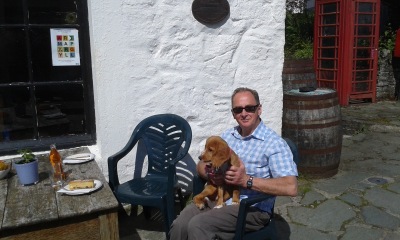 As you can see it really was a glorious day and the sea is incredibly blue – beautiful.

Here are a few more shots from around the harbour and canal.

Another attempt at getting a selfie with Bramble in it – as you can see it’s a great shot of her and Ken, but I’m just not quite in the picture. We’ll keep trying.

The big building in this picture is the Crinan Hotel where my beloved used to have a job washing dishes when he was a teenager. 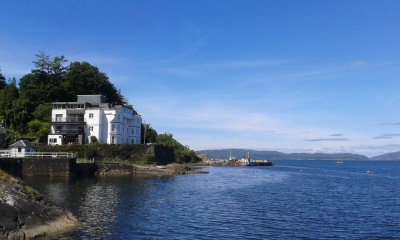 We had a lovely chat to the lady that lives in this house after she’d finished fussing over Bramble. She has a great photo of the harbour that was probably taken in the early 1900’s which shows that apart from a few small things the area is very similar. Her cottage is so pretty but in the old photo it is only single storey and was a pub.

Part of the canal path leading away from Crinan. Many years ago we walked the canal path from Crinan to Ardrishaig with Jean and Brian (Ken’s sister and brother in law), and during the day we had sunshine, rain, sleet, hail, and snow – great weather for walking 9 miles.

Looking back at the cafe where we had our cake stop and showing a few of the sail boats resting before heading out to sea. During the year over two thousand boats go through the canal. 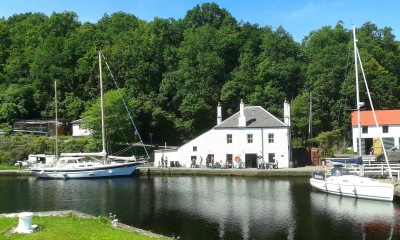 I love this picture and the look on Ken’s face – he was posing for me with Bramble when she decided to try and bite his ear.

When we got back to the car park we discovered that Pablo (our car) had decided to clone himself – do you think they parked next to us so that the cars could feel like they had a friend?

Our next stop was Bellanoch which is where the Wright family actually lived – the white house in the middle of this picture is Smithy Cottage which was my beloved’s childhood home.

The cottage is now a holiday let and luckily the people currently staying there weren’t in otherwise they may have thought it a bit odd with the two of us pearing in the windows and wandering around the back yard.

Looking from the front of the cottage to the pontoons where the boats moor up.

This is out on the pontoons – I’m wrestling Bramble to stop her eating bird poo (sometimes dogs can be so disgusting). 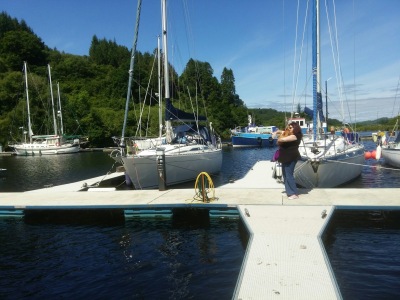 There is more to come in the next posts but I’m going to finish this one with a quote from one of the seats in front of Smithy Cottage which is dedicated to members of a family that lived in Bellanoch.

2 thoughts on “Argyll memories in the sun”