What a fabulous weekend it was – sunshine and time with my beloved. We headed out for a lovely Sunday drive down the side of Loch Ness. Our destination was Fort Augustus at the bottom of the loch – it’s 50 miles from home.

One thing you’re guaranteed of in Fort Augustus is tourists, of many different nationalities – it’s very popular. We saw this great camper van in the car park – it’s a hire van from Wicked Campers and the paint job is crazy. 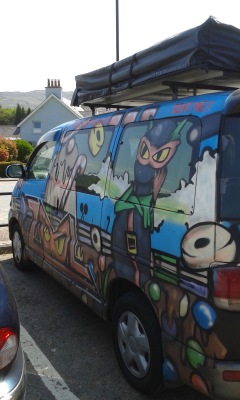 As you would expect in any town near Loch Ness, there is a bit of a monster theme going on.

There are several lock gates ascending up to the next part of the Caledonian Canal, which is a pleasant area for a walk. The Caledonian canal is from Inverness to Fort William and is 60 miles long – it’s a great place to walk along and is part of the the Great Glen Way.

Whilst we were there they opened the bridge to let boats into the start of the locks – above picture it’s closed, and below picture it’s open.

We of course had to stop for cake though we did have a sensible sandwich first – we took turns holding Bramble so that the other could eat. Bramble was very popular with the tourists and had people stop to fuss over her from Germany, USA, Japan, and somewhere in Scandinavia. 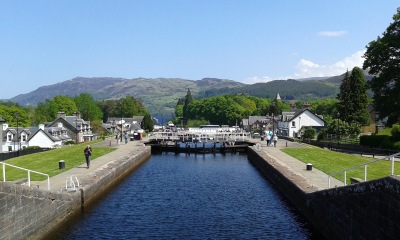 When we went back to the carpark we found this fabulous tour bus with a wonderful company name and as you can see the bus is made to look like a Hairy Highland Coo (that’s cow for the non Scottish amongst you).

I should mention that as we started to drive out of the car park two cyclists pointed out to us that we had left the back of the car open – Bramble was getting super air conditioned.

This picture is taken from the very bottom end of Loch Ness – still no sign of the monster.

We drove back home up the less touristy side of Loch Ness where a lot of the road is single track with passing places. It’s incredibly beautiful with a stark wildness as far as the eye can see. 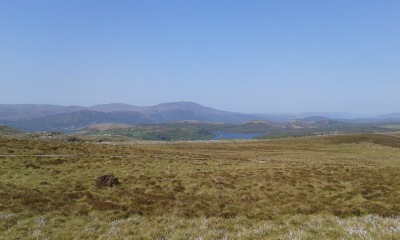 Bramble in her luxury transport home – you can see why it was a slight problem if we’d driven off with the back up.

We stopped by a river in a pretty little picnic spot and it’s a place we will have to come back to with food next time. It’s a lovely spot under the trees and so peaceful with the only sounds being nature. 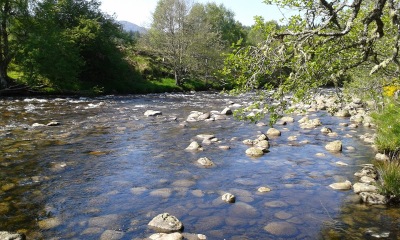 Bramble having her first experience of a river – she was brave enough to stick her mouth and nose in, but thankfully not much more as I think she might have been washed away she’s so little.

Look Ken, the back of the car is open.

Further along the road we stopped to admire all the bluebells on the hillside – I love it when they’re in amongst fallen trees as there’s a synergy of the dead branches and the spring flowers. 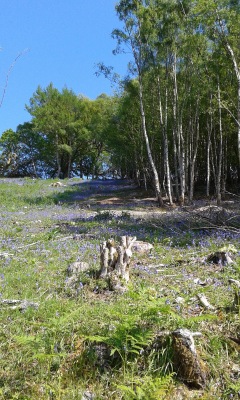 It was when we stopped here that we encountered two young people walking along the road with backpacks – both looking rather fed up. Ken couldn’t resist asking them how their day was going, and discovered that because of the lack of buses on a Sunday they’d had to walk from Inverness to Foyers, which they were nearly at – that’s 19 miles!! I wonder who’s responsibility it was to check travel arrangements on their holiday and I think it would have been an interesting atmosphere in their tent that night. Oh well, when they go home to America it will be a really funny anecdote they can share with people.

Love the wild rhododendrons that you find amongst the trees.

There is more to come of our day out but until then, be good, stay safe, and if you’re in Tasmania I hope that you’re safe, dry, and warm.