Last Sunday we went to Folk by the Oak which is a one day music festival held in the grounds of Hatfield House and as the name suggests it is folk music. I had vaguely heard of a couple of the acts but that didn’t matter as I knew my beloved would enjoy it – he has much wider musical tastes than me and yes he knew the music of several of the acts.

There was one main stage and a smaller stage in a tent for the lesser known performers, though some of these were fantastic. The first act we saw on the main stage was Catrin Finch and Seckou Keita – they combine the harp and the Senegalese instrument the kora. The sounds they produced were magical.

We arrived with nothing to weigh us down only to discover that some people brought everything but the kitchen sink with them. There was a wide selection of chairs, eskis, tables, windbreaks, and even portable gazebos. We’ve decided we’re going to make up a festival kit that we can have ready to go for the next one – note to self, must be better prepared. 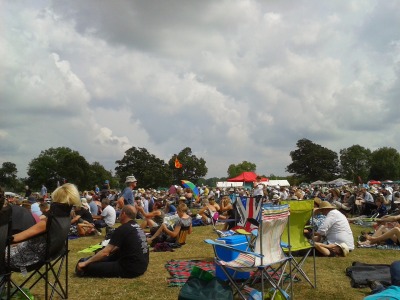 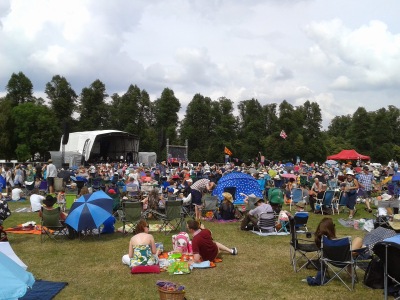 I love all the colourful banners and flags they have around music festivals – it really adds to the atmosphere with the cheerfulness of the colours.

These two pictures show Kathryn Tickell and the Side performing – as you can see there is a harp, cello, fiddle, and clog dancing. 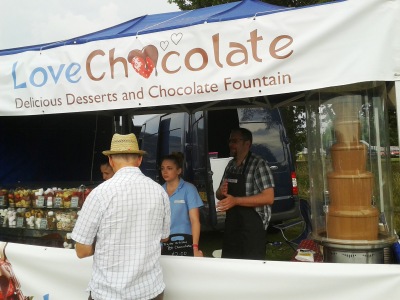 My beloved has a bit of a sweet tooth (and that’s a massive understatement) so imagine his joy when he discovered the stall with a chocolate fountain – he was in chocolate heaven.

For the first few hours we had glorious sunshine but then some rather ominous looking clouds started gathering overhead and before we knew it we were in the middle of a thunderstorm and totally soaked. We didn’t have umbrellas with us but I wouldn’t have used one anyway as I didn’t want to attract the lightning. Nothing like getting the whole festival experience.

During the storm lots of people took shelter in the craft tent, with even men joining in the learn how to knit table – when the guy with the sunglasses completed a stitch everyone cheered. 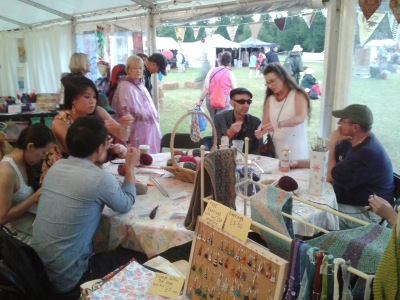 One of the best acts of the day was Richard Thompson  – he’s apparently a folk icon, having been around for a very long time, cofounding the group Fairport Convention, and releasing over 40 albums. 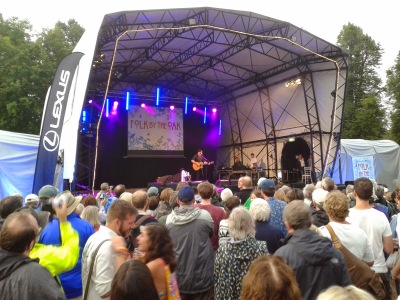 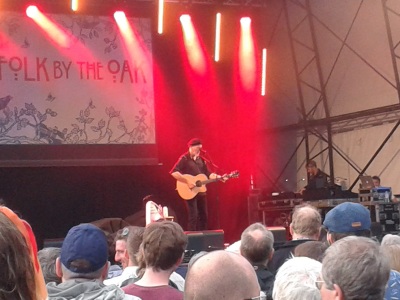 Other acts we saw on the main stage were The Elizabethan Session, Beth Orton, and Seth Lakeman. The two acts we really liked on the smaller stage were the Keston Cobblers Club, and Paper Aeroplanes. 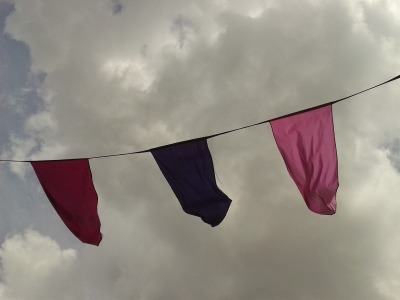 A few shots from around the arena to finish – in the background of this one you can just see the rows of portaloos. It was actually better than most events as they had separate men’s and women’s toilets which meant our area stayed much cleaner.

So that was our fun day out at Folk by the Oak – if you’re in the area next year then you should definitely try and attend.

Until next time, be good, keep smiling, and do something that makes you happy.

P.S: Final picture is of our wanderer friends Elaine and Paul whom we met in London during the week. They’re just back from travelling around Europe in their motor home. We found a lovely pub just behind Covent Garden that allowed dogs – as you can see, Sammy looks very pleased with himself – Bombo was under the seat.