This morning we went and had breakfast at the Aquadrome – it’s getting to be a bit of a habit. It’s just so scrummy and afterwards we go for a walk so we don’t feel too guilty. We also like it because they have a quiet room where children aren’t allowed so there are always tables even if the main room is packed.

Now just to continue my fascination with toilets, the signs on the doors at the cafe are very good – the doors have a framed pair of pants to differentiate men or women – love it.

After our food break we went for a walk along the Grand Union canal. The Grand Union runs from London to Birmingham, and we’ve done several small sections of it but all in or near London. There are lots of boats moored up along the canal of all shapes and sizes – lots of fixer uppers, but I think this one is beyond help.

It’s so peaceful walking the canal path, you’re only really disturbed by all the crazy people out on their pushbikes or out for a jog. Here’s a couple of boats that are really nice – the owners obviously take a lot of pride in their homes. 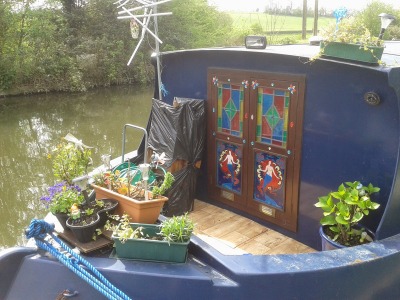 Lots of the boats are permanent –  they even have garden sheds and patios next to their mooring. We saw several canal boat dogs, but only one canal cat – I think they were probably curled up in the warm as the wind was quite cool today.

There were a few boats travelling who knows where so we sat and watched one go through a lock – they made it look like hard work and their steering skills were a little dodgy.

Apparently people who hang around locks are known as gongoozlers by the canal users – they’re a bit like bus and train spotters – I don’t think we were there long enough to earn the name. Near the lock was a lovely old lock keepers cottage covered with flowers and if you look closely at the top window you’ll see several teddy bears waving at people passing by..

One of the boats we saw was absolutely adorable – it looks like someone has taken a little cottage and put it on top of a boat. 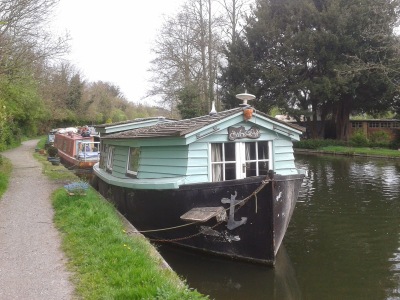 We met a couple of ducks that made an odd pairing – we decided the white duck was acting as body guard for the mallard as he was originally nearer to us but as we got closer he moved to the other side like he was being protected.

After a while we left the canal path to walk along the Ebury Way which follows the route of an old railway line that ran from Rickmansworth to Watford – we were only on a small part of it, the actual route covers 3 miles. It was really pretty walking along under the trees with lots of forget me nots edging the path. 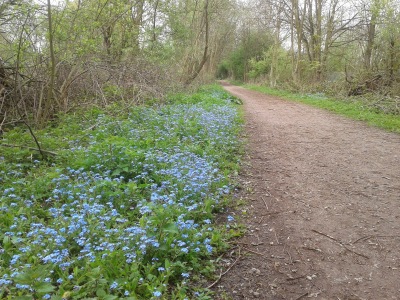 Now you may have noticed that I’m a bit of a fan of selfies – it’s just that I like to have lots of photos of the two of us and they’re also great to use in my Project Life scrapbooking. So here’s today’s offering. 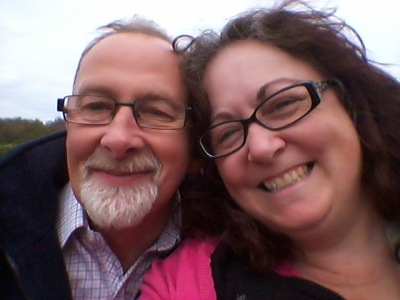 That’s it for now – stay safe, keep smiling, and go out and enjoy nature.

P.S: Final picture of one of the beautiful blossom trees.