I’m getting behind again – I can’t believe that it’s two weeks since we went to Peace in the Park at the Brahma Kumaris Global Retreat Centre in Oxfordshire. It was a free event promoting exactly what it says, peace. Also meditation, respecting the planet we live on, and wellbeing.

The Global Retreat Centre is in beautiful grounds, perfect backdrop for such a lovely event.
The pictures below show the area around the house and they also show what a glorious day it was. 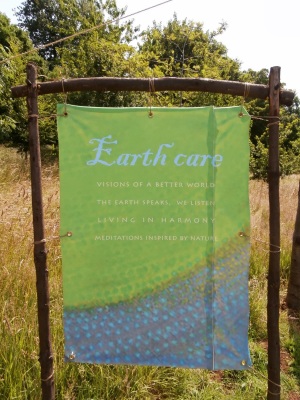 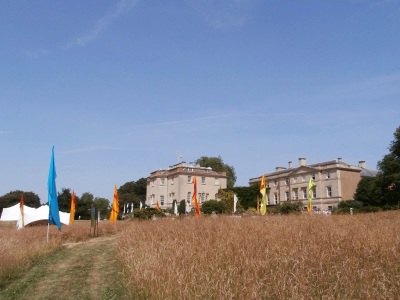 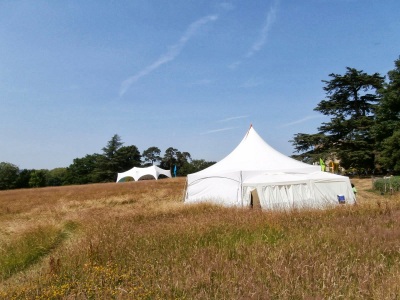 Within the grass they had cut a maze out, so you would think it would be easy (that’s what Ken thought) but it was quite tricky – and I wouldn’t let Ken cheat by stepping over the lanes. 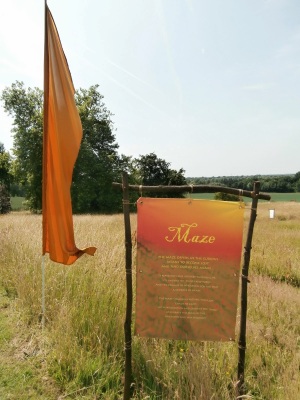 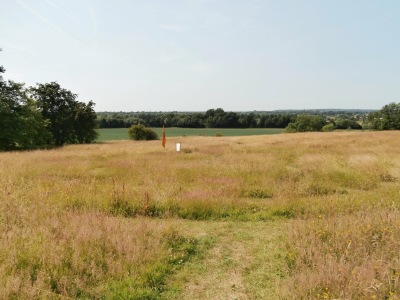 There were lots of different things to do and see around the site including various musicians in really pretty settings. We went and listened to a lady playing the oboe in a chapel – I know the picture’s not brilliant but it’s just to give you an idea of what it was like. 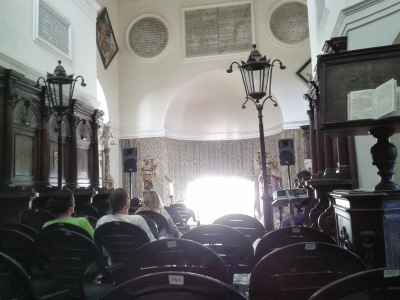 We took part in two activities, a guided meditation and Chi Gong. Both were in a lovely area near the trees, with hay bales to sit on, though Ken got in touch with the earth and laid on the ground for the meditation. Chi Gong is a bit like Tai Chi, gentle meditative movements. 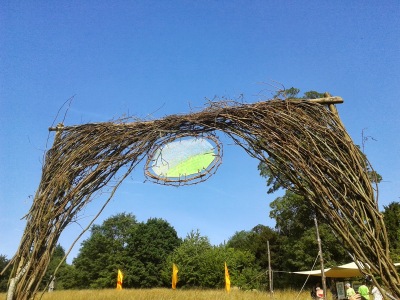 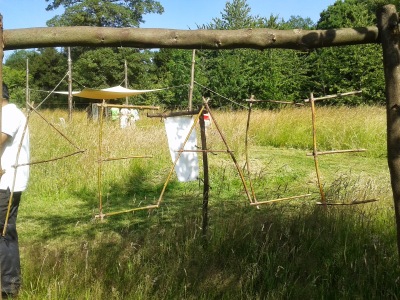 A really cool area that I just adored was the fairy glade in the woods. They were telling fairy stories for the kiddies, and there were lots of fairy homes. 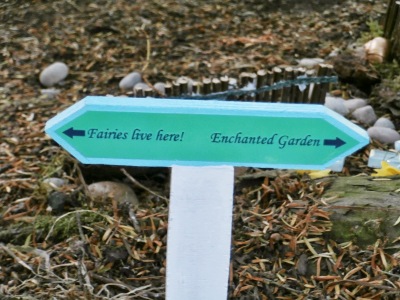 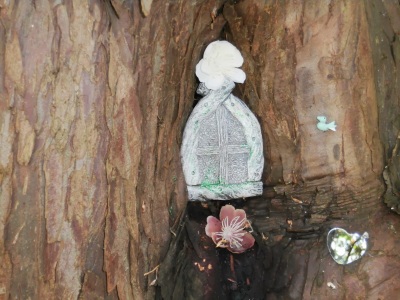 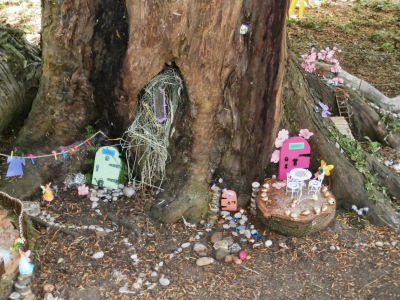 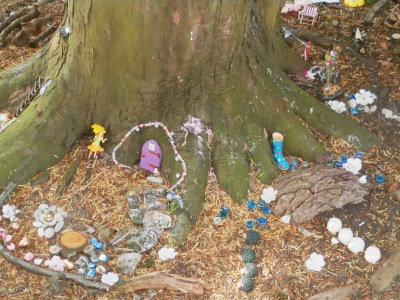 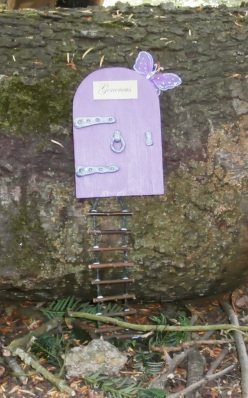 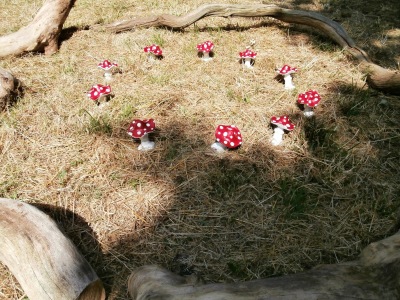 I really loved this area as I have a fairy door in our lounge room for the fairies to get in and out through.
In the meditation area there were some lovely painted rocks (have I ever mentioned that I love rocks and have quite a few around the house) which you got to choose one and underneath  was a mantra for you. The rock I chose said – ‘Happiness is a choice’. 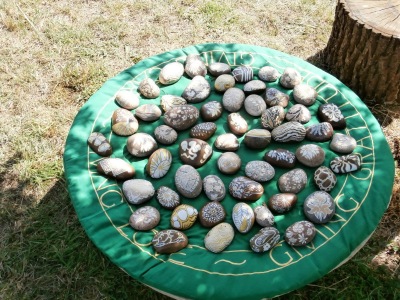 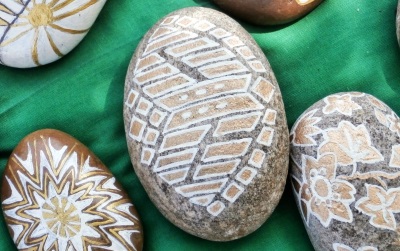 Ken found a friend while we were wandering around – her name is Doris and she does workshops involving clowning and laughter and how this improves wellbeing. 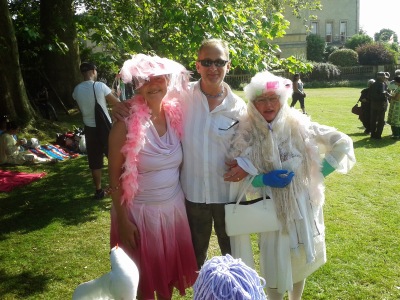 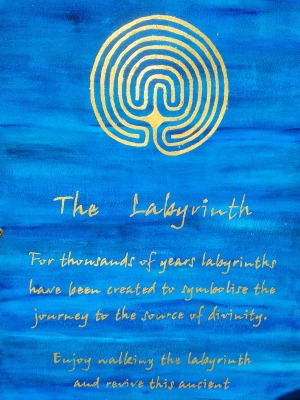 You may notice that there are no photos of me – have you heard the saying, horses sweat, men perspire, and women glow? Well I was glowing so much it wasn’t a pretty sight – it was over 30 degrees which is lovely but hot.

At the end of the day there was a mass meditation in front of the house along with beautiful singing. 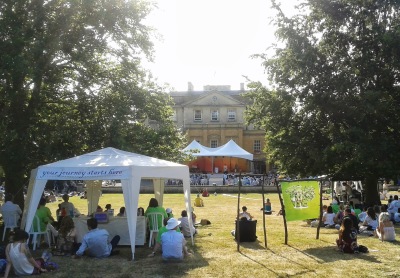 As we left we were given a scrummy homemade sweet and a booklet about being a peacemaker in our world. 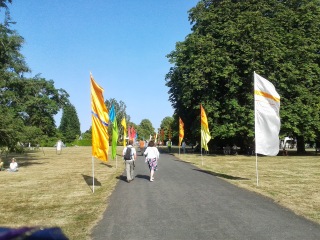 It was a really wonderful day and I would encourage anyone who lives within driving distance to go next year.
That’s it for now, so be good, enjoy life, and spread peace and happiness to those around you.
Pamela and Ken
xxxxxxxxxxxxxxx
P.S: Just to reassure those that think all I do is visit graveyards, a picture of some headstones from the cemetery in the grounds. 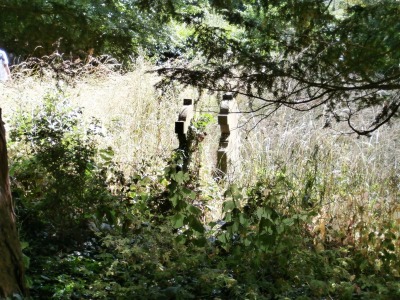 2 thoughts on “Peace in the Park”