The first weekend in July we went to the Cornbury Music Festival in Great Tew Park in Oxfordshire.  We arrived on the Thursday night at about 9.30pm and left on the Sunday night at the end of the festival.  As someone who spending a whole weekend roughing it at a festival hadn’t appealed, it was the best weekend we’ve had in ages.  Don’t worry, I didn’t resort to sleeping in a tent, we stayed in a podpad, which is really a small wooden tent.  They had two boards up off the ground with provided air mattresses, a solar powered light, and a car charger socket so you could charge phones, camera’s, etc.  The power was a little intermittent even though it was a very sunny weekend, but luckily we took our own light, along with our lovely sleeping bags.

Our first morning we went off to explore the site before the music started at lunch time – the picture below is taken at a van that was giving away free toast to promote their bread, so a free breakfast to start the day.  One of the guys giving it out was an Aussie and he was trying to convince the brits to have Vegemite on the toast.  We’re hugging a heart, because if you hugged it hard enough it turned on the toaster behind – very cool.
﻿

As it was so warm and sunny we both had our hats on, but it was making my head too hot so I ended up buying a parasol – much better as it kept my shoulders covered as well.  Below you can see it, with me sitting eating my first red velvet cupcake of the weekend accompanied by a glass of pims – perfect.

Here’s my beloved looking very festival – beaded hat, blue beads around his neck, and a lovely man bag which he only uses at festivals – very gorgeous don’t you agree. 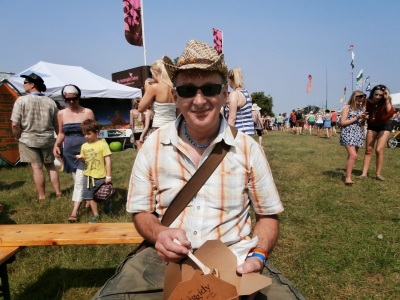 While I was sitting eating my cupcake this group of South African singers suddenly appeared and started performing in front of the tent that was promoting fruit from their region and giving away free samples.  They were great performers, really energetic and bubbly – I could have listened to them all day. 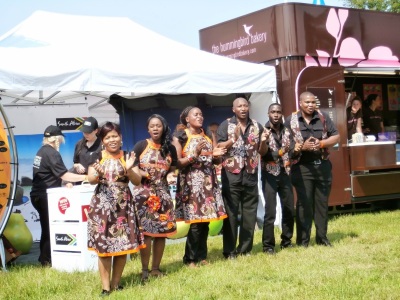 This picture is taken in the Therapixie area, which is where the complementary therapies were provided, and outside the tent they were in there were armchairs, logs, and these lovely creations for sitting in on cushions.  I had reflexology on the first day – absolute bliss.

On the Friday we watched several up and coming bands on the riverside stage, and the act we really wanted to see on the main stage was Imelda May.  Her session was fabulous – she has an amazing voice and her band are really good, including a crazy drummer.﻿

One part of the park there was an amusement arcade and rides – some very scary looking rides, so neither of us went on any of them.  Here are a few shots I took before it got too dark.﻿ 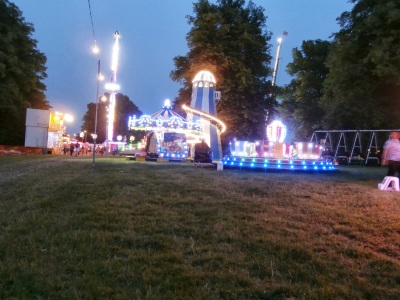 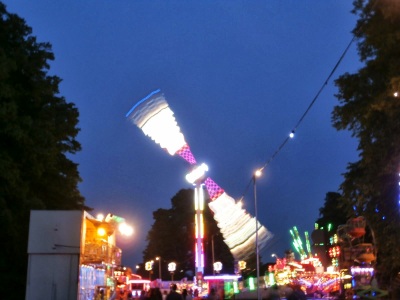 Saturday dawned bright and sunny – uneventful night apart from Ken falling out of bed because he rolled over too close to the edge on the air mattress and his arms were trapped in his sleeping bag so couldn’t stop himself – I did laugh quite a lot (I did check he was okay first).  Breakfast on Saturday and Sunday was pancakes with bananas and chocolate which was a fabulous way to start the day. 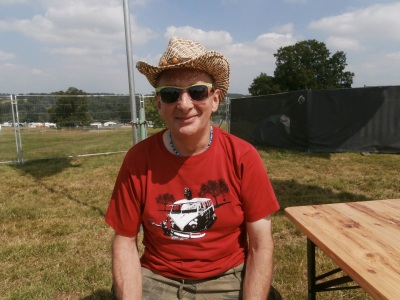 These old Citroen vans were food vans – Ken was very impressed with them and made me take photos.  This is just a small section of the food stalls, which featured food from many different countries around the world – lots of choice, though I did feel a little sorry for the stalls that only had hot food as it was a bit too hot at times to eat a curry.  The ice cream stall constantly had long cues at it. 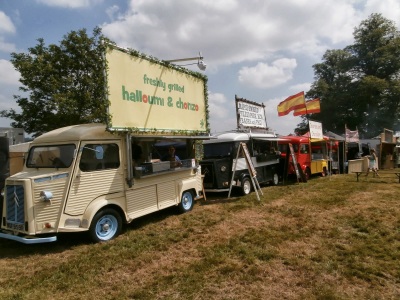 The stall below is where they sell the cupcakes of loveliness – where I got my daily dose of red velvet from.  They were open from early in the day til about 11 at night as it’s never the wrong time for a cupcake. 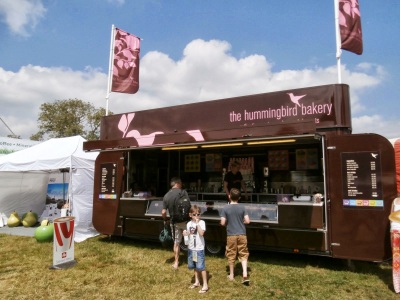 This stall is where I bought my lovely parasol from – it took me a while to decide on one as they were all very pretty. 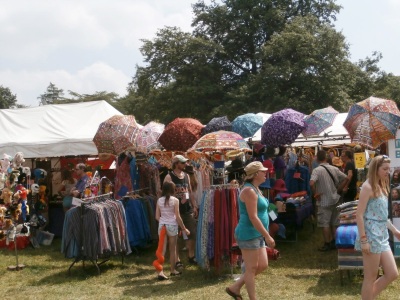 It was really busy on the Saturday, many more people than on the other two days as I think that must be when the most people come that are only coming for one day.  One of the nick names for Cornbury is posh stock as it’s a little bit more family friendly than some music festivals, and PM David Cameron is usually spotted there – we heard he’d been seen in the VIP area.  They obviously weren’t thinking of us with the term posh.
﻿

The site is full of colour – from banners, to flags, to the colours on the stalls.  Around the site there was also things happening that just suddenly started, like morris dancers, and wandering performers for the children. 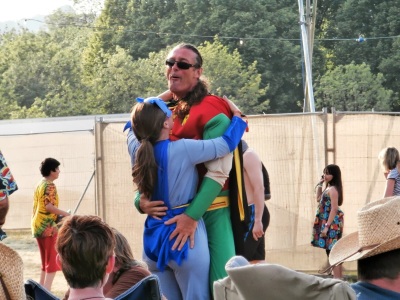 Again on the Saturday we watched some up and coming bands, but the band I was most looking forward to seeing that day was the Proclaimers – they didn’t disappoint, their session was great, lots of songs that you could sing along to.

We also enjoyed Osibisa, and for Ken we went and saw Echo and the Bunnymen – I think he must have been boiling in that coat he had on.

Sunday morning – hot and sunny again. We spent the first part of the day relaxing outside our mansion, as did many others. 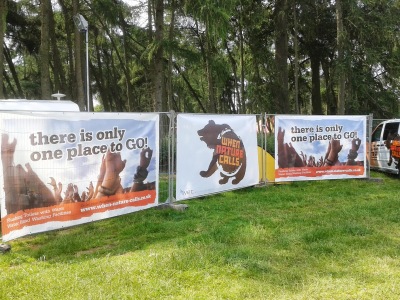 Now I have to be honest, the one area we refuse to rough it is with the toilets – no stinky porta loos for us. Luckily there is a company, When Nature Calls, that provides posh and clean loos. We have to pay and then you get an armband for the whole festival.

Question, which wig do you think Ken should invest in? My favourite is the brown one. 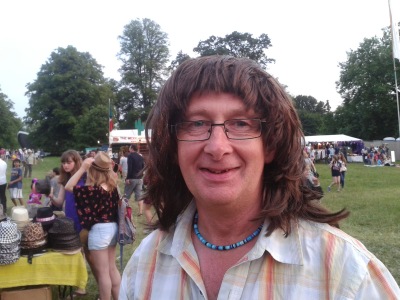 Sunday was the day with the most groups we wanted to see – because of this we joined the camp chair brigade and found a good spot for the afternoon and evening.

Wilko Johnson, lead singer of Dr Feelgood, has terminal cancer so Ken found his set quite emotional, as did many people – his performance was incredible, full of life which was great.

Bellowhead is a folk group and really finished the festival off on a high.

So that’s our weekend – would definitely recommend Cornbury to anyone who would like a slightly more laid back experience.
Until next time, be good, enjoy life, and take care of each other.
Pamela and Ken
xxxxxxxxxxxxxxxxxxxxxxxxx
p.s: Final shot of lovely cupcakes and the two of us.

One thought on “Cornbury Music Festival”