For my beloveds birthday I took him to the Pudding Club – something we’d wanted to do for a long time, but had never got round to.  This post is part one of two, as we stayed the night at the hotel where the Pudding Club is held, and the day after we meandered through the Cotswolds to get home.
﻿

The Three Ways House Hotel is in Mickleton, which is a tiny village between Stratford Upon Avon and Chipping Campden.  Lovely place to stay, and they do lots of food themed stays as well as Cotswold Walking weekends.

So now to tell you about the Pudding Club – it is a meal that consists of a main course, and then seven puddings!!  It began in 1985 and at the end of the night you get a certificate to say you’ve been part of the Pudding Club.  The rules of  the club are that you can’t go and get another pudding unless your bowl is empty, so it was a challenge that we were willing to accept.
﻿ ﻿

﻿ It’s a fantastic evening with a great atmosphere – the evening is chaired by the pudding master who explains what is happening and tells you all about each pudding before we even get into the dining room.  His main bit of advice was that when we had our mains to go easy on the vegetables, so I did just that, having my chicken with mushrooms and nothing else.  There were over seventy people there that night, all ready to celebrate puddings.  Once everyone had eaten their mains, the parade of puddings commenced, with each pudding being introduced and walked around the dining room to a round of applause.
﻿

﻿ From the picture above you’re probably thinking how can those puddings serve over seventy people – well, the pudding pixies were constantly providing new puddings, as soon as one got towards the end, a brand new steaming pudding appeared on the counter – our pudding master said that the cooks had never been beaten, always having puddings in reserve.  The staff at the hotel take the ones that are left over home, making sure there is no waste.

So now I’m going to show you my puddings – it wasn’t until the third pudding that I realised you could ask them for a smaller portion, which was a relief and meant that I could achieve my goal, trying every one of the puddings.﻿

﻿Now, as you can imagine, by this stage I was beginning to feel a little bit full (that’s an understatement) and wishing we had longer than  15 minutes between puddings.  Lucky us, we were the first table to go up each round, and each time it got back to our table seemed to be quicker and quicker.  Still, not to be beaten we soldiered on.
﻿

﻿
﻿
Hooray, we survived but can I tell you there were some very ill looking people in that room.  The people at our table were lovely, and made the evening all the better with good conversation and encouragement if anyone on the ‘team’ were flagging and feeling like they couldn’t finish the challenge.

During the evening you are given a score sheet and you have to give each pudding a score out of ten, and then say which was your winner overall.  Below are mine and Ken’s score cards, and as you can see we had some very different views on the puddings.
﻿

After we’d all given in our score sheets, they then did a vote by a show of hands to see which was the winning pudding on the night – Very Chocolate sponge won, with Sticky Toffee & Date second. 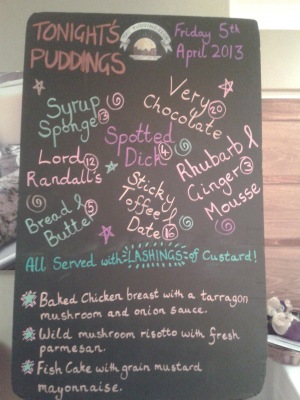 ﻿
﻿The final part of the evening was putting everyone’s score cards into a tin and then they got the gentleman sitting opposite me to draw one out, and he pulled out mine, which meant I won a pudding to take home – thankfully it was a Sticky Toffee and Date one.  It was great to win, but the pudding is in the freezer as neither of us think we can face a traditional steamed pudding for quite some time.

Okay, that’s the end of part one – more of our adventures tomorrow.  So until then, stay safe, be good, and eat some pudding.

2 thoughts on “The Pudding Club”