WARNING! WARNING!
This blog contains dodgy hairdos and glasses that are so big they should be illegal – you have been warned.

This weeks top ten Thursday is those things that make going back to school smoother, either for your child or thinking back to our own school days. As I don’t have a child and can’t remember those first days of each year, I’m going to look at school in general. Thank you to Tamara at Part-time Working Hockey Mom for another interesting top ten. (In the group photos I’ve put a pink diamond on me in case you couldn’t pick me out).

1. Marriage: it’s important to remember that marriage proposals and acceptances made when you’re six years old are not legal and binding, otherwise I’d be in a marriage with a man and a women.

2. Listen Carefully: One day in cooking class I used the wrong flour to make a tea cake and as a result my cake came out looking and feeling like a hockey puck. The teacher, Miss Johns, took great pleasure in showing the rests of the class what happens when you use the wrong flour – I have a distinct picture in my head of her flipping my hockey puck cake back and forth between her hands.

3. Get involved: I’m the first to admit that I’m not sporty, but I found my niche in music and playing the flute in the school concert band. I wasn’t the best player, that was the two girls to the right of me, but as second flute I got to play the parts that were for the oboe and used to drive everyone mad at Christmas by always wanting to play Frosty the Snowman as that has a great oboe part in it.

4. A sense of belonging: when I went to highschool from the first day you were put into a homeroom group that you were part of for the four years. We met at the start of each day to do attendance and had the same teacher for the four years as well. Mine was Mr Davis, woodwork teacher, and he was wonderful. When I started the older members would help us navigate what to expect in school, and at the end of my four years I was able to do that for the younger teens in our group.

5. Follow your beliefs: in my third year at highschool we met with careers advisers about our future decisions. I sat with the lady and explained to her that I was going to be a nurse. Her response was, ‘why would you only want to be a nurse when you could do so much more like be a doctor!!’. That has stayed with me throughout my career and I always make sure people know that actually being a nurse is a wonderful thing and I wouldn’t want to have done anything else.

6. It goes quickly: When you start highschool it feels like an eternity stretching out before you, especially if you were as shy and awkward at school as I was, but blink and it’s over. The future lies ahead, whatever that may be.

7. People surprise you: in years 9 and 10 I was one of only two girls in our science and maths classes. Myself and Suzanne decided to do a study on mice reaction times in a maze and were constantly getting harassed by the 21 boys in the class for being silly. One Monday in winter we came back to school to find the heating had gone off at the weekend and the mice were nearly frozen to death – I wish I’d had a camera with me to photograph the big tough boys standing on tables around the room near ceiling heaters, bringing our mice back to life.

8. Perceptions: how you are in school is not real – teenagers see what they want to see and cliques become more important than what’s real. Don’t worry if you’re not popular, or if you feel like you fade into the woodwork and are not seen by others – that’s not real life and the future is yours to grab hold of and explore.

9. True Love: teenage crushes are a normal part of school life and even though it feels like it, your heart isn’t actually breaking in half when the person of your affections ignores you, or worse, laughs about your adoration. The thing that used to really upset me was when the guys I thought were cute would ask me advice on how to get one of the more popular girls attention (much as I wanted to I didn’t give them bad advice).

10. Success: at the end of all the hours or study, school activities, embarrassment, and awkwardness there is an end point. Hopefully you will get a job, and even if it’s not what you planned initially, you can always change it in the future. I left school half way through year 12 to do my nursing training, and after three years I did what I’d always said I’d do (from age six), I graduated as a nurse. As you can see I also graduated as the wearer of the hugest glasses ever (well it was the 80’s). 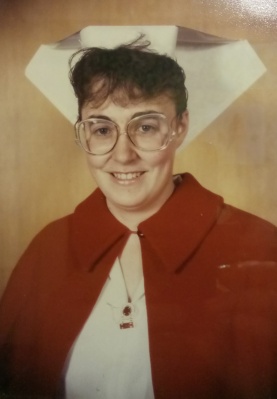 What about you? What advice would you give someone about making school easier? Before you go pop over to Tamara’s blog, Part-time Working Hockey Mom to see what my fellow bloggers have come up with.

Until next time, be good, stay safe, and take a look at some of your own old photos to see how dodgy your own hairdos were.

4 thoughts on “Top Ten Thursday: Back to School”