In 1991 four young nurses decided to travel to the United States for the holiday of a lifetime – six weeks exploring all that America has to offer (or maybe just a small part of it). It’s a very big country and it was quite amazing seeing things that we’d grown up with in TV shows and news programs.
We went to many states, starting in the west (California) and finishing in the east (New York). There were two bus tours as well as a few days of our own exploration time in LA, New Orleans, and New York, and it would take a very long time to tell you about it all. For today I’ve chosen just a few photos from one of the days we had in Washington DC on our second bus tour. This tour was quite challenging as we were the youngest by quite a few years, and when we booked it we weren’t told that the tour guide would explain everything we were seeing in about five different languages, usually leaving English until last, which meant we were about two blocks past whatever he was describing.
I was really excited to visit the Lincoln Memorial as it’s such an iconic image (and yes that is me in front of President Lincoln). Unfortunately there was scaffolding up when we visited so we couldn’t see the writing which is on the wall behind him: ‘In this temple, as in the hearts of the people for whom he saved the union, the memory of Abraham Lincoln is enshrined forever.’ The statue is nineteen feet tall and was opened in 1922. 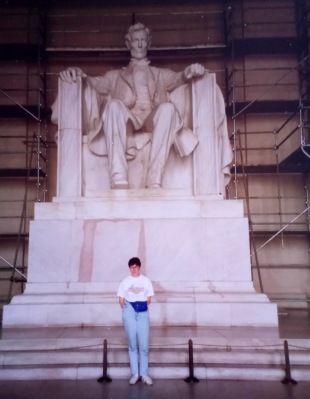 The Lincoln memorial has featured in many films and TV shows over the years and I’ve included two of my favourites – Legally Blonde 2 and In the Line of Fire, both with scenes at the memorial.

One of the wonderful things we did during our time in America was visit Arlington National Cemetery which is for active service personnel, veterans and their families. The cemetery covers 624 acres which is huge and now there are more than 400,000 people buried there. 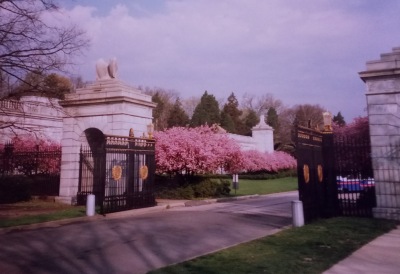 When we visited they told us how many funerals take place there every day, and at the time I just couldn’t believe the number – probably because I was only in my early twenties, but on checking the website it is correct. During the week there are between 27 and 30 funerals every day!!! On a Saturday there are between 6 and 8 funerals. That number just boggles my mind. 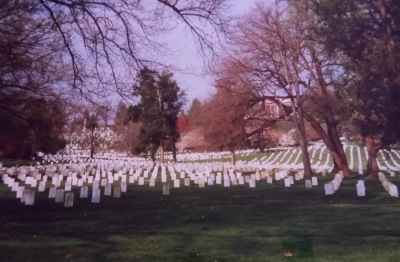 Of course one of the most famous graves in Arlington Cemetery is that of President John F Kennedy who was assassinated in 1963. At his grave site there is an eternal flame which was lit by Jackie Kennedy and Robert Kennedy during the funeral, and around the area is carved the words of one of his most famous speeches. JFK, the 35th president, is one of only two presidents buried in Arlington cemetery, the other one is William Taft, who I’d never heard of, but he was the 27th president of the United States. 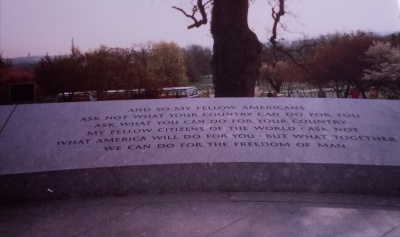 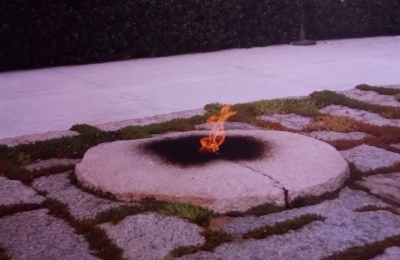 Our lovely tour guide didn’t really take us to the White House, but this is my shot I took as we drove past in the evening – thank goodness it is so lit up otherwise you wouldn’t have seen it. 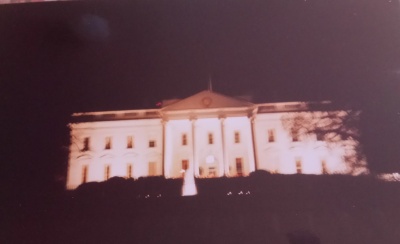 Hope you’ve enjoyed this very brief visit to America’s capital. Until next time, be good, stay safe, and have a fabulous day.