A few months ago we went for a weekend break in Plockton which is on the west coast of Scotland and I wrote about it in the A to Z challenge for the letter P – you can read it here. For us the journey to and from our destination is just as much fun as there is always something to explore or enjoy.

On the way to the west we had to have a hiatus by the side of the road whilst several trucks went by with the blades of a wind turbine on them – as you can see they took up the whole road and were very long. Thankfully there was somewhere for us to pull off as last time we met one of these trucks it was on a road with not much space and we ended up going into a bit of a hole which slightly damaged the front of the car. 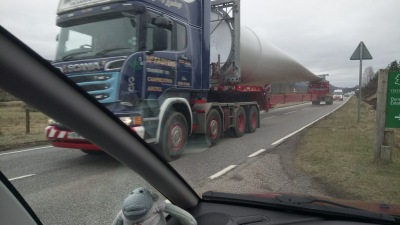 We came across this cairn by the side of the road and it marks the spot where a very brave young man died in 1746. Roderick Mackenzie was a supporter of Bonnie Prince Charlie (from the Battle of Culloden) and had a slight resemblance to the prince and was one of his guards. When he encountered a group of Cumberland’s men (the enemy) he didn’t have a chance, but with his dying breath he cried out “you have killed your Prince”. As a result Cumberland returned to London believing that Prince Charlie was dead, resulting in the Prince being able to escape to Skye and then eventually Paris. It’s quite interesting that Flora Macdonald is known around the world for helping the Prince in his escape, but Roderick rests in relative anonymity with a simple grave on the opposite side of the road to this cairn.

We went past this field of alpacas and of course I made Ken stop so that I could get out and have a chat to them – I made sure I didn’t get too close in case they took a dislike to me and decided to spit in my general direction. 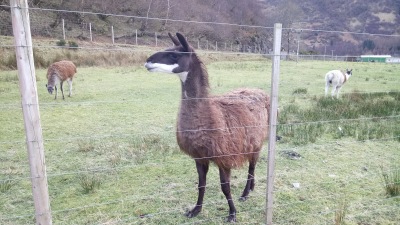 Grounded boat on the banks of the loch.

A surprising thing that we’ve discovered since moving to the highlands is that there are wild goats roaming around. They are descended from domestic goats but have been wild for a very long time. In fact, I discovered that the wild goats are protected by a royal decree handed down by Robert the Bruce after their presence in front of a cave he was hiding in stopped the English from searching the cave. 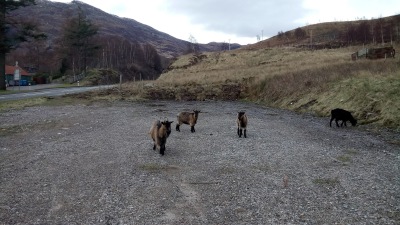 No shock to anyone that reads our blog but we found the ruins of a church and graveyard to have a look around. You can tell it’s a few months ago as there’s still a dusting of snow on the mountains. This is the ancient church and burial ground of Kintail which a stone at the gate states was dedicated to St Dubhthach circa 1050 but was probably in use three centuries earlier. 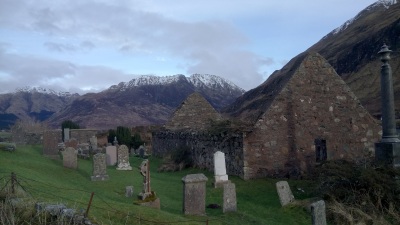 This was a burial ground for the Clan MacRae and the below memorial stone for them which was inside the church.

Here’s a few pictures that I took around the graveyard which is still used and there are a few more modern gravestones.

I love how overgrown this grave is. It’s so atmospheric and would look great with some mist on the ground, a bit like a horror movie set, with something emerging from the depths of the grave. 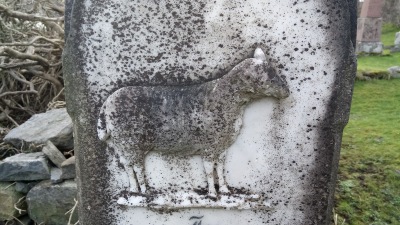 The following two memorial stones were on the wall of the graveyard and I love the sentiment about these people being back in their native land. 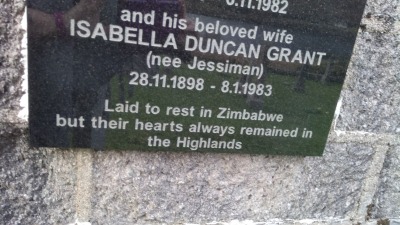 The below picture is just to show what sort of thing makes my beloved pull over – a sort of graveyard if you like, but instead of people this graveyard contains vehicles. I’m reliably informed (by the car fancier) that the brown thing is a Peugeot 305 van which is very rare.

Last picture was taken in the Cluanie Inn which we often stop at when we travel to the west. They’re another lovely place that allows dogs and there’s also plenty of open countryside to take Bramble for a walk in.

Whilst Ken was walking Bramble I got to meet this very handsome chappy whose name is Bear. He is an Akita and weighs seven stone – that’s quite heavy for a dog.

He was so lovely and his fur feels incredible – so soft and cushiony. He was a very patient boy as lots of people were looking at him and asking his owner questions about what he was. I was sat next to Bear so was chatting to him and his human slave and found out that he is a pets as therapy dog.

Look at the size of his paws – massive.

There you have it, the fun and interesting things we can find in a drive on our way somewhere. Until next time, be good, stay safe, and take the time to enjoy the journey this week instead of worrying about the destination.

6 thoughts on “A Journey to Scotland’s West Coast”