Okay, this one is difficult and took me a lot of puzzling to decide what to write about – thanks to Tamara at part-time working hockey mom for stretching my brain cells. My first thought was to be really soppy and list the top ten things about being in my beloved’s arms, as that’s my favourite place on earth, but that’s a bit too predictable and I can hear you all gagging from here. Instead I’ve chosen Stanley, a little town on the north west coast of Tasmania which is 33 miles (52 km) from where I grew up.

The reasons that this is one of my favourite places on earth:

1.Small but beautiful – in the 2011 census Stanley had a population of 481. One wide main street lined by old buildings which makes it easy to see why the town was used as a setting for the 2016 film The Light Between Oceans which starred Michael Fassbender (gorgeous). If you click here you’ll see the trailer and you’ll get a glimpse of the main street and the nut (see point 4).

2. They sell the best seafood and I’ve eaten many crayfish (rock lobsters to non Tasmanians) from Hursey’s Seafood which is in the middle of the picture with a giant crayfish on their roof.

3. I love all the colonial buildings that have been preserved. They’re so pretty with their verandahs and pretty ironwork. My dream house (when we win the lottery) has a large verandah with beautiful iron lace work.

4. The Nut. This is the core of a long extinct volcano that towers over the town and whilst you can walk up the Nut there is also a chairlift which takes you to the summit. At the top there is a circular track which gives great views over the area.

5. Joseph Lyons was the tenth prime minister of Australia and still the only one to have come from my home state of Tasmania. He was in charge of the country from 1932 until 1939 when he died in office (not in his office, but whilst he was still prime minister). This little house in Stanley is where Joseph was born in 1879 and lived with his parents and seven siblings – I don’t know how they all fit in there. The house is now a museum of Joseph’s life and is really interesting to look around.

6. Penguins. Not a lot of people realise that we have penguins in Tasmania – they’re Little Penguins, or to give them their name that I prefer, Fairy Penguins. They’re the smallest breed of penguin and have burrows around the coast – I love that in Stanley they have signs warning people to look out for their tiny residents and years ago they even had a tiny penguin crossing painted on one of the roads.

7. There are some fabulous cafes in Stanley with our favourite being Touchwood, which is a cafe, design gallery and gift shop, and also has three cottages that you can stay in. The food is fabulous and the desserts/cakes to die for – whenever we’re home in Tassie we always make time for a visit. 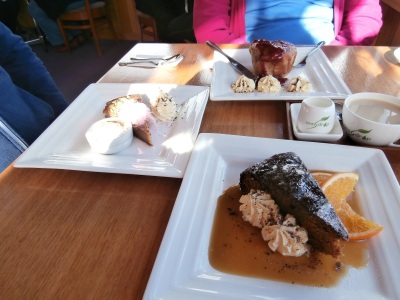 8. The Plough Inn was built in the 1840’s and is one of oldest buildings in the town. It was owned by the Van Diemen’s Land Company which had it’s base in Stanley and is now a huge organisation that is still based in the north west of Tasmania. When I was a child you could visit the Plough Inn and I loved looking at all the antiques and imagining how life was in the 1800’s – I’m not sure if you can still go inside but it’s still nice to look at from the outside.

9. As someone who is a little obsessed with graveyards, this is a fabulous one. It sits at the edge of the town adjoining the beach and shadowed by the Nut – very atmospheric, especially when you add in the wind that so often whistles through Stanley. (Yes, your eyes aren’t deceiving you, there is a toy black cat sitting on the gate – his name is Hallow and it was part of a funny holiday album I was doing for a friend).

10. Memories.  I have a picture of Stanley that sits on our windowsill and I love looking at it because it contains so many memories from throughout my life.

So there you have it, one of my favourite places on earth, and if you’re ever in Tasmania make sure that you visit. Where is your favourite place? Why don’t you pop over to Tamara’s blog and see what my fellow bloggers have come up with – click here to visit.

Until next time, be good, stay safe, and do something nice for yourself today.

Lovely day at the @highlandwpark ☀️💜🐅
A few shots from the beautiful wee FIBees garden in Forres - so much to love in a tiny space.
A new friend we made today. 💜
Love that face. 💜💜💜
Reposted from @pangolincrisis
A walk along the Caledonian canal on a beautiful summer's day. I think Ken was walking with medusa. 💜
Gorgeous highland cows - the calves look like teddy bears. 💜
Discovered the beautiful Old Town of Leys garden today - so gorgeous and so colourful. 💜
Perfect bank holiday afternoon treat, matcha latte and hazelnut meringue @phoenixcafe.findhorn
Wonderful exhibition at @invernessmuseumandartgallery - Health, Wealth, & Happiness, a history of healthcare in the Highlands. On until June 18th.
Fabulous day out exploring Aberdeenshire, visiting Fordyce, Portsoy, and Sandend. Even got to chat with the graveyard cat.💜
Amazing fungi. 🍄🍄