End of the third week and we’re nearly there – the fact that I have no idea what I’m doing for several letters next week is NOT bothering me at all. As we’ve just had a week on the Isle of Skye it was the obvious choice for the letter S. Skye lies off the West coast of Scotland and is attached by a bridge. 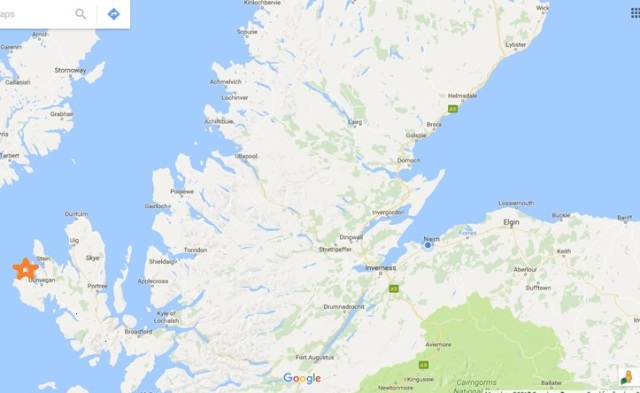 We love Skye and I could write pages about it, but instead I’m just going to pick a couple of things that you might find interesting. This is the cottage we stayed in, Colquhouns Byre, a converted cowshed which we stayed in nearly 15 years ago. The one big difference is that they’ve put in a tv since we were last here, but we resisted as it was a week for recharging our batteries, and we didn’t watch it at all. 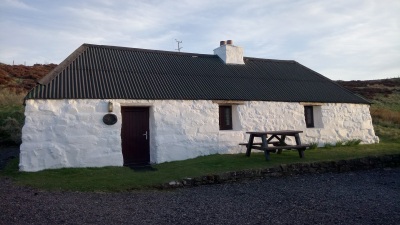 In my B post I wrote about the Battle of Culloden which feature Bonnie Prince Charlie leading the Jacobites. After they were defeated Prince Charlie fled and in part of his escape he was assisted by Flora Macdonald who got him in a boat to Skye. She sounds like an amazing woman and had quite an eventful life which you can read about HERE if interested. In 1884 the Skye Boat song was written to commemorate Flora’s part in helping Prince Charles flee the country – some of you may recognise the tune as the theme to Outlander.

Flora is buried at Kilmuir graveyard on Skye – I love the epitaph and her name definitely is mentioned in history on a regular occasion. 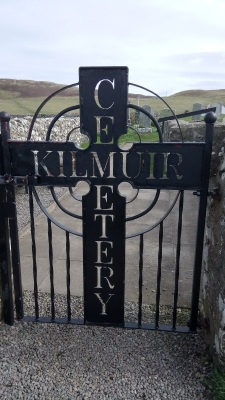 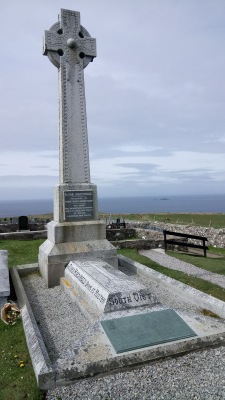 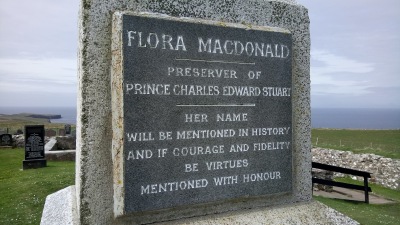 Here’s a few other interesting graves that are in Kilmuir – it’s well worth a visit if you’re in the area. This knight has survived the harsh weather of Scotlands west coast rather well, though Ken did scoff at the thought of Angus carrying it up from the shore on his back – the graveyard is quite a long way from the shore up a large hill. 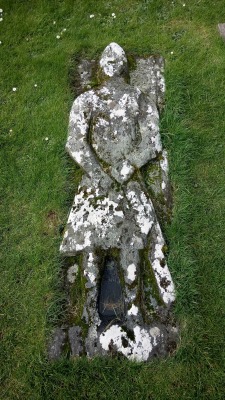 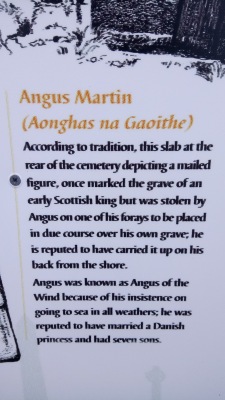 I had to include this gravestone as Donald was killed by a boulder whilst climbing in 1945 and his headstone is shaped like a boulder – we thought it was slightly ironic and hoped it wasn’t the boulder that did the deed. 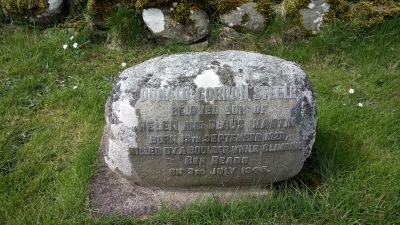 This stone marks the burial place of Charles MacArthur who was a famous piper to the clan MacDonald. Unfortunately the piper’s son was drowned before the inscription was finished so the stone carver gave up his work as he realised he wasn’t going to get paid. The inscription finishes half way through a sentence – “and the melody of his fingers will….”. 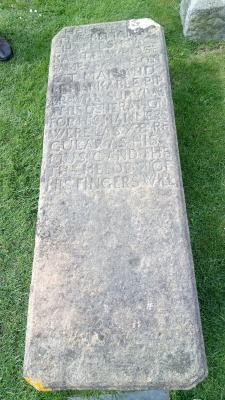 In the more modern graveyard next to the one Flora is in, you’ll find the grave of Alexander McQueen, the famous fashion designer. His grave marker is really beautiful and I love the quote about love across the top. 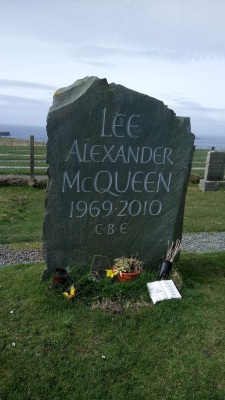 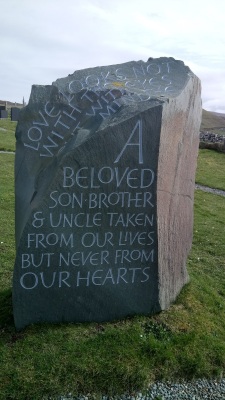 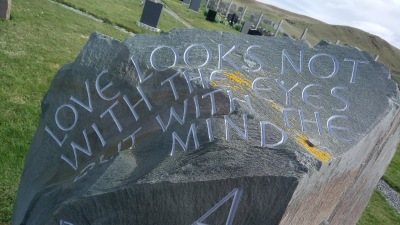 The other thing I have to share with you about Skye is the Fairy sites. Yes, you heard me correctly, fairies. There is a famous tale about one of the Chiefs of the Macleod clan wanting to marry a fairy princess. Eventually it was allowed but after a year and a day she had to return to her own people. The Fairy Bridge (below) is where the Chief and the princess said goodby when they parted. Can you spot any fairies hiding under the arch? 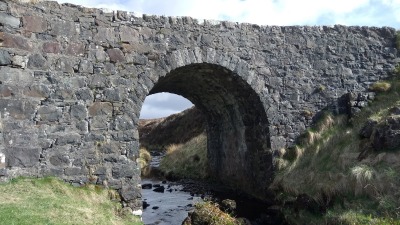 There are lots of places on Skye that are associated with fairies and there is the preserved remains of a Fairy flag in Dunvegan Castle which we saw years ago when we visited the castle – imagine my excitement at seeing a bit of fairy history. Just for those doubters, here’s an interesting take on the fairy flag from the Dunvegan Castle website.

The other place on this theme that we visited was the Fairy Pools. These are a series of natural waterfalls and rockpools with slightly otherworldly clear blue water, hence the name. It’s a bit of a trek to see them but it’s well worth it. 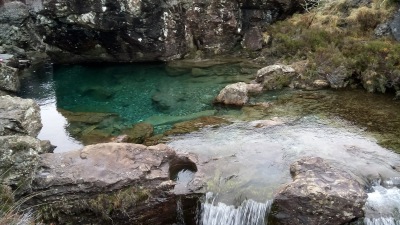 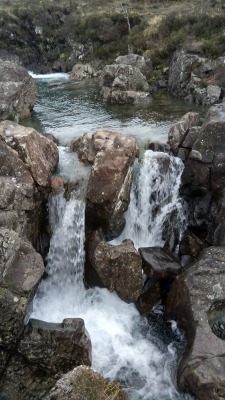 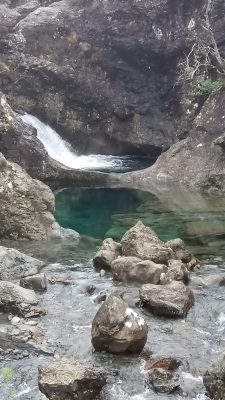 Of course I had to take my shoe off and put my foot in a fairy pool – it was a little bit cold, as the mountains the water comes down from have still got some snow on them.

So there you have a little taste of Skye – a beautiful island and a wonderful place to visit. Before you go, why don’t you pop over to the A to Z blog to see what my fellow bloggers have come up with for the letter S – Click Here to visit.

Until next time, be good, stay safe, and do something nice for yourself today.

P.S: I had to include this picture of a Highland Cow that I had a chat with whilst we were on Skye. 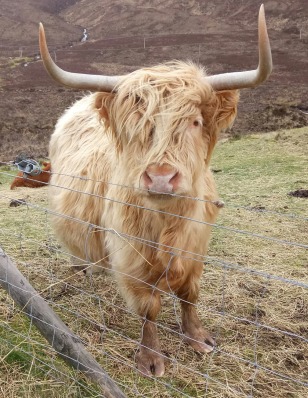 I think the brats are trying to tell us it's cold. ❄️
Fabulous coffee and cake at @cafecalluna in Pitlochry. 😊
Lord Rocky Horror is nearly too big for the radiator bed. 💕
A collection of weird and wonderful fungi in the Scottish Highlands. 🍄🍄
Fabulous coffee and cheesecake at the lovely @quirkycafelavender. 💕
Lovely wander around @brodiecastlents Gardens today - gorgeous autumn colours. 💕
Gorgeous young seal that Ken and Bramble Jelly came across whilst out walking. 💕
Had a wander around the @findhornfoundation today admiring the beautifully unique homes. 🏠💕
Beautiful Princess Cookie Cat - it took perseverance to get this because as soon as I turn the camera on she looks away. 🙃
Gorgeous Bramble Jelly after a swim in the river. 💕
Reposted from @mindcharity
Perfect Sunday, coffee and cake at the @theolivetreecafelogie - so scrummy. 😋