Nearly the end of the third week in the A to Z blogging challenge and for R I thought I would share a few totally random things that haven’t really fit into any of the other posts. I love it when we find the weird, wonderful, and slightly odd things in the area where we live.

The first fabulous tradition that we discovered only a couple of weeks after arriving in the highlands was the burning of the clavie to see in the old new year in January. The clavie is a wooden barrel full of wooden staves and kindling that is lit and carried around the town of Burghead on the Moray firth in Scotland.  After the clavie is lit, it is then hoisted onto the shoulders of the designated carriers and walked around the streets.  Along the way they stop and give bits of the burning wood to businesses and households which is good luck for the coming year. It’s totally crazy atmosphere with everyone running alongside with sparks flying everywhere and we loved it.

In Forres, a town not far from us, they hold the world bagpiping championships each year, so this wooden piper is there as a symbol of that. Don’t know who the strange woman is molesting him. 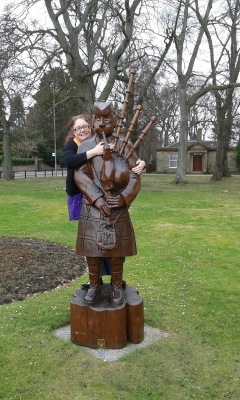 A phenomenon of the weather that we’ve discovered is the Haar. This is a thick sea fog that only occurs in the very northeast of England and the east coast of Scotland, which we fall under. Everywhere else can have bright sunshine and we’ll be unable to see anything. It’s quite spooky when you see it rolling in as you can see the sun above it still and then when it reaches you the sun is just a haze in the distance.

We loved this barbers that we came across in Pitlochry – someone with a sense of humour on the slightly dark side. Ken is standing next to a model of Freddy Krueger of Nightmare on Elm Street fame.

Now I know that one of the very common misconceptions about Scotland and especially the Highlands, is that it rains 99% of the year. Well, shockingly, some of our beaches have brightly painted beach huts for a day at the beach (and probably to get out of the rain). These lovely one’s are at Hopeman which is east of us. 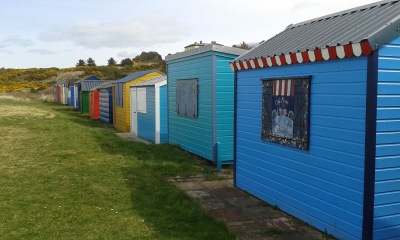 I had to include this sign that was in a bookshop we went past recently. It reminded me of when I used to help a friend in his record shop in Tasmania and people would come in and ask us about songs they’d heard but didn’t know the title of. One woman told us it was about love and expected us to narrow that down, and another lady came in and tried to sing it to us, but she was singing no song that had ever existed.

What you can’t tell properly from the window display, is every book in the window has blue as the main colour on its cover – it was fabulous.

In a graveyard in Avoch (pronounced Och) is the grave of Sir Alexander Mackenzie who was the first European to cross the North American continent – there is a river in Canada named after him. 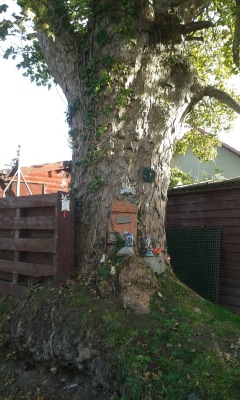 We passed this tree when we were out for one of our drives around, just seeing where we end up. It has a fairy door and fairies hanging around outside the door – as someone who is very much a believer in fairies (you know you want to believe) I love it when I see things like this. We have fairy doors inside our house so that they can get in and out easily.

In the Highlands and islands we often find reference to their Scandinavian past, and I love the name of this craft beer that is made in Orkney.

One day we wandered into an antique shop in Cromarty which was full of incredible things, but the one that really caught my eye was the sign for the lunatic asylum – I was very tempted to buy it and hang it over our front door.

People thought I needed the above when I told them we found a unicorn near Cromarty, but here is the photographic proof. It is in the grounds of the Cromarty Arts Trust. I have a bit of a thing for unicorns so thought this was one of the best things I’d seen in ages.

One thing we can definitely say about the highlands is that it’s never dull, unless of course you live there. Dull is in Perthshire and has been paired with Boring in Oregon since 2013 and there is even an official Boring and Dull day on August 9th which the Boring people hold parties on.

There you have it, random Highlands things – before you go, why don’t you pop over to the A to Z blog and see what my fellow bloggers have come up with for the letter R – Click Here to visit.

Until next time, be good, stay safe, and enjoy your weekend.

11 thoughts on “R is for Random Highland Finds”