O is for Orkney, which is the closest group of islands to the north of Scotland. We visited in May 2016 and fell in love with this very windswept land. There are 70 islands that make up Orkney, but only 20 of these are inhabited.

To get to Orkney from Nairn we drove 125 miles to Scrabster, which is just outside Thurso, and then got the ferry to Stromness, so in total 155 miles. My beloved doesn’t do boats so I drugged him up for the journey whilst I went outside and enjoyed the view. 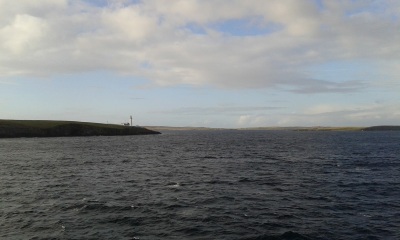 After having a beautiful day for the ferry crossing we woke up the next day to very dreich weather.

Joy, the owner of the Bed and Breakfast we were staying in, suggested some semi indoor activities for us so off we went to visit Maeshowe. This is a chambered cairn that is over 5000 years old – so basically it’s the oldest grave site that we’ve ever visited. You go into the tomb with a guide, ours was Gerry, and they give a really interesting talk about the history of the site. Getting into the tomb was a little bit challenging and Ken wished he had filmed me as we had to bend nearly double to get down the long entrance passageway – I’m the first to admit that I’m not very flexible and a couple of times I nearly got stuck.

Inside there are three chambers where bodies were placed and visited again and again. On the walls there is graffiti that was placed there by Norsemen, descendants of the vikings, in approximately the 12th century. Our favourite of the runic carvings was the one that translates as: “Thofir Koveinsson carved these runes high up”, and they were very high up in the chamber – good to see the vikings had a sense of humour.

Our next stop on our neolithic tour of Orkney was Skara Brae. This is a group of 8 homes that have been dated to 3200 BC that had been covered by the sand until a storm uncovered them in the late 1800’s. It’s a really windswept and exposed spot which explains why the homes are quite low down and the walls are incredibly thick. 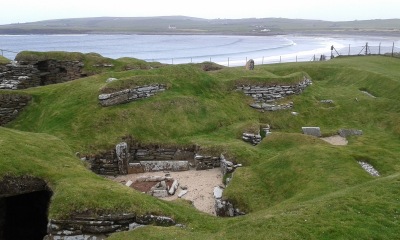 When it had finally stopped raining at the end of the day we went to visit the Standing Stones of Stenness which date from before 3000 BC. There is so much ancient history on these small islands, probably as they were one of the first ports of call for anyone coming from the Scandinavian region to invade Britain.

Our second day in Orkney we visited Kirkwall and St Magnus Cathedral which is the UK’s most northerly cathedral and it was founded in 1137. 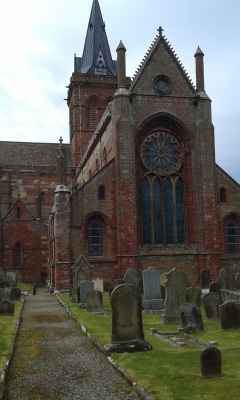 It has a fabulous graveyard (yes I know I’m a bit weird) and inside there are some amazing tombs with great carvings. 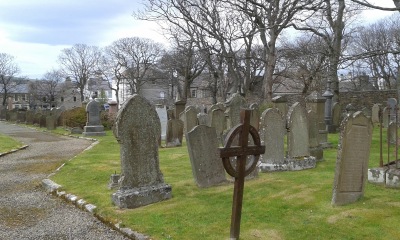 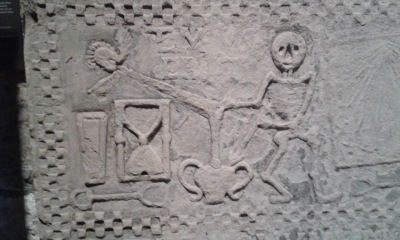 Looking down the cathedral – it’s a really beautiful space and very peaceful despite lots of tourists coming in and out whilst we were there.

Our next stop was at the Italian Chapel which was made out of two nissen huts by Italian prisoners of war during the second world war. We were really lucky when we first arrived as we had the chapel to ourselves for a short while and it gave a real sense of the peace this building must have given to the Italians that were here. What’s most amazing is that all the metal work is made from scrap metal and all the decoration, including the stone work, is painted on.

Here’s the two of us showing that despite the blue skies on the second day it was still very, very cold. 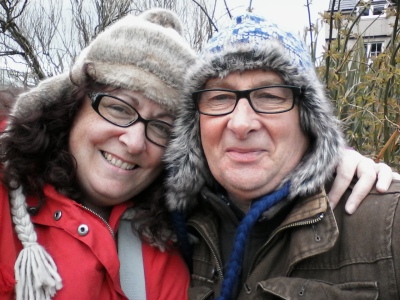 The last picture is a very significant picture for me, lovely spring lambs in the fields on Orkney, as this was the moment I decided to give up meat. I’d been debating it for a while, and after a cooked breakfast which was lovely, when I saw these lambs skipping around it just made up my mind. So Orkney is especially dear to my heart.

There you have it, the first of the islands in my A to Z blogging challenge – will there be anymore?? Before you go, why don’t you pop over to the main blog and see what other people have come up with for the letter O – click HERE to visit.

Until next time, be good, stay safe, and consider having at least one day a week when you don’t eat meat.

6 thoughts on “O is for Orkney”