Finally in the A to Z blogging challenge we get to N and the town we live in, Nairn. The town was settled by the Norse in 1000 AD, but there is some evidence that there may have been people living in this area as far back as the 4th Century.

It’s a lovely little seaside town which is claimed to be the driest and sunniest part of Scotland. There is a small harbour where lots of yachts moor up but in the past it was a herring fishing port. 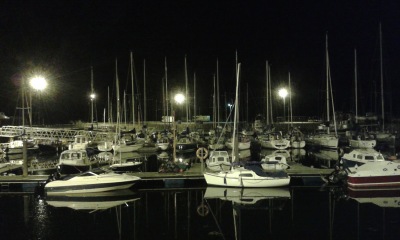 The harbour was built by Thomas Telford who also featured in my post, D is for Duirinish. It was a thriving herring port until the industry collapsed in the 1930’s and it’s commemorated by a statue called the Nairn Fishwife. The women, as well as caring for the home and raising the children, collected bait, baited the lines, prepared and smoked the fish, and then sold them through the local area from the basket on her back. 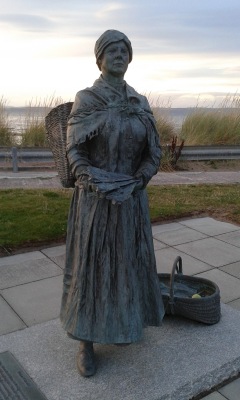 There always seems to be something going on in this little town, and just a week after we’d arrived in the Highlands, 16 months ago, we went down to the beach on new years day to watch crazy people run into the freezing water to raise money for a good cause.

In the 1800’s Nairn also became popular due to Dr John Grigor who claimed that bathing in the salt water was good for the health. As a result several grand hotels were built and the Victorians flocked to Nairn to bathe in the waters. Not all the hotels survived but you can still see some of the large victorian homes that were built in west Nairn.

The town is kept looking really pretty by the gardeners and there are lots of beautiful floral displays. This one features dolphins as Nairn sits on the Moray Firth which has the largest school of dolphins in the UK.

There’s a bandstand overlooking the green where they play cricket in the summer. There are two golf courses, one each side of the town, and during the year there are organised fun runs.

There’s a little theatre which holds all sorts of events, including productions by the local drama club, film nights, and charity events. 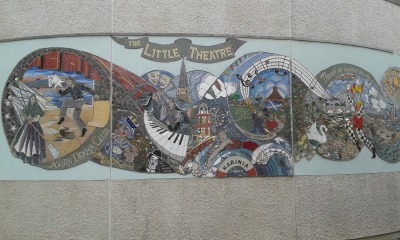 One of the biggest attractions in Nairn is the beach which feels like it goes on for miles. In the summer it is very popular with people coming from all over to spend a day on the sand. Even in winter there’s usually people dog walking or sitting around a campfire to enjoy the natural beauty. 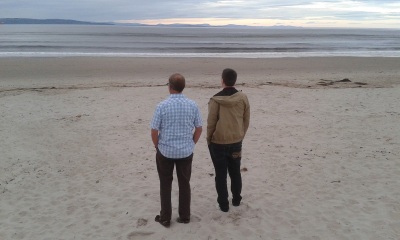 In July is the Nairn Country Show which is a really fun family day out. It has all the usual things you’d find at a country show including creatures made out of pine cones, farm animals, grand parade of animals, and farm machinery. 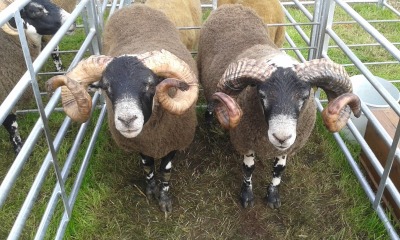 In the summer there is a fun fair that sets up home near the bandstand for a couple of weeks – great atmosphere and a chance to be a kid again.

In August is the Nairn Highland Games, a day that really celebrates everything Scottish – massed bands, highland dancing, strong men throwing big things around, and lots of bagpipes playing. 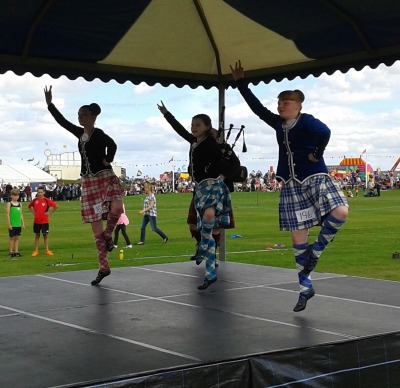 In 2013 the population was just under 13,000 and interestingly there are at least nine churches in the town. It’s a really nice place to live and so much quieter than London – we’re very glad we made the move.

Here’s one of the many lovely sunsets to finish with.

Before you go, why don’t you pop over to the A to Z blog and see what my fellow bloggers have come up with for the letter N – click HERE to visit.

Until next time, be good, stay safe, and take a moment to think of the things you like about where you live.