Here’s the ten that I feel able to share:

1. Co Hosted a Christmas in July party with my friend Elaine complete with mulled wine. What made this particularly crazy is that we went out the night before and then had to organise and host the party after not very much sleep and a little bit of a hangover (just a warning, a hangover and the smell of heated red wine does not mix).

2. Went to the Pudding Club and after a main course we then proceeded to eat seven different puddings. We were determined to try them all and by the end I think we were both a very interesting shade of green.

3. When I was 23 I went to work in Saudi Arabia for a year – everyone in my family thought I was totally crazy. It may have been crazy and there were multiple crazy things that happened during that year, but it was also a great year because it’s where Ken and I originally crossed paths.

4. I know I include this one in lots of posts but it was quite a crazy thing to do, and that was attend the Fairy Festival – it was a gathering of many people who are willing to share their special breed of quirkiness.

5. Myself and a friend, when travelling in the USA, walked back to our hotel from a nightclub in Washington DC via back streets after midnight. At the time, the early 1990’s, the city was known as the murder capital of the US.

6. In 2011 I did a crazy relay race with a friend that was advertised as a fun day out designed for all abilities – they obviously weren’t including me when they said “all” abilities as by the end I thought I was going to pass out or throw up, and we finished absolutely last! The race included a run, followed by lots of different activities including; cycling, canoeing, a sack race, and lots and lots of climbing. My feet were more blisters than feet at the end of it, and we had to be rescued during the canoeing as we just kept going around in circles.

7. A few years ago I convinced my husband to attend a death cafe with me – it was being held in Notting Hill. I was hoping for an open discussion on how people face death and thoughts about life, but instead it became a platform for a few very opinionated people on euthanasia – they basically hijacked the session and I came to verbal blows with them once they found out I was a nurse. As Ken says, I take him to all the best places.

8. I was once crazy enough to agree to be a model in a charity fashion show – I had to wear three different outfits, we had our hair and makeup done, and then were escorted down the runway by older gentlemen in suits. I’ll be honest and admit that I had to have several drinks of wine before I made my way onto the runway.

9. Yes, it’s still the fashion show, but my last outfit was a whole new level of craziness as it was a slinky nightdress with matching dressing gown, and shockingly I chose this myself. Needless to say, the majority of a bottle of wine had to be drunk before this performance, and as you can see I was still clutching onto the wine as I was escorted down the runway. 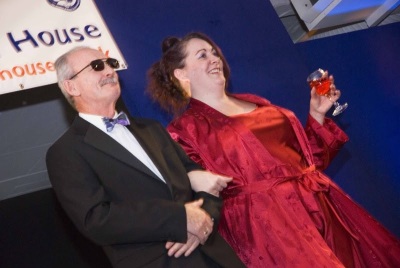 10. When I was writing this post I asked my beloved what the most crazy thing I’d ever done was, and his reply was “marrying him”. Some may say that love is the craziest thing that exists, but at least Ken and I can be crazy together. 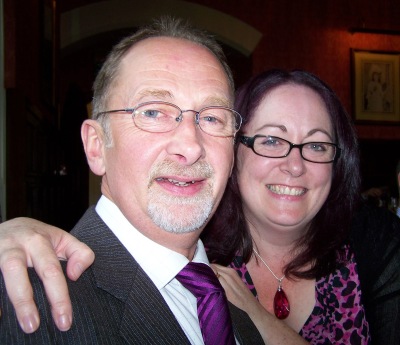 So there you have it, my top ten crazy things – what sort of things have you done that you consider crazy? Before you go, why don’t you pop over to Tamara’s blog and see what my fellow bloggers have come up with – click HERE to visit.
Until next time, be good, stay safe, and do something a little crazy this week.
Pamela & Ken
xxxxxxxxxxxx