A couple of months ago I had to go to Scarborough in Yorkshire for a workshop, so we decided to make a weekend of it and visit a few places that were on our list of things to do. Scarborough is 380 miles south of us and I was very grateful that my beloved doesn’t mind driving.

As we headed down the motorway we made our usual stop at the House of Bruar for a drink and something to eat. The below sculpture was in the stairwell and depicts mackerel swimming amongst seaweed.

Scarborough is a seaside resort that really comes alive in summer and has been a summer resort since the 1600’s. All along the front there are restaurants and amusement arcades which look really pretty at night when all the lights are lit up. It is just along the coast from Whitby where we’ve spent some lovely holidays in the past.

Nighttime selfie. Ken had explored during the day whilst I was busy and then took me on a wander in the evening. 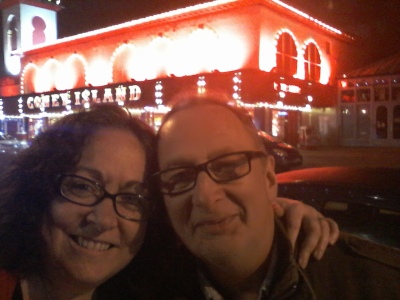 Don’t even ask. Maybe it’s an age crisis thing – you have to admit he looks very cute riding Noo Noo. 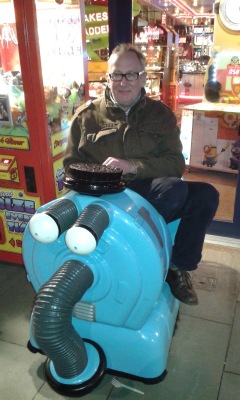 On our way back up to Scotland we went past the Angel of the North which was designed by Antony Gormley. It’s near the A1 at Gateshead and amazingly is passed by over 90,000 drivers every day!!!

Hooray, back in Ken’s mother land – I love how they make a big deal of crossing the border. There’s usually a piper here as well. 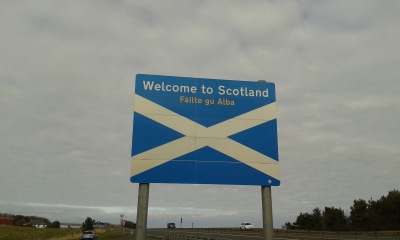 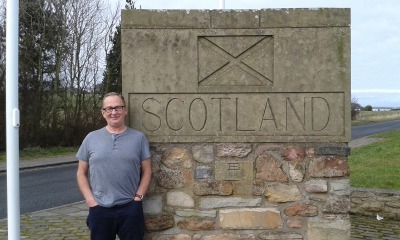 The next place we visited was Rosslyn Chapel – anyone who has read Dan Brown’s The Da Vinci Code will have heard of this fascinating building, as it is a big part of the story. Outside the visitor centre is the Old Rosslyn Inn which as you can see from the plaque had some interesting visitors including the Prince of Wales (not the current one) and Dr Samuel Johnson. 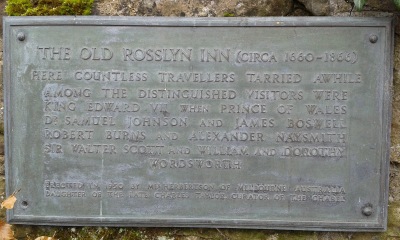 There is a really lovely visitor centre with lots of information and history to look at beffore you go through to the chapel. The chapel was founded in 1446 and is still an active place of worship.

It’s actually smaller than I expected, but still incredibly beautiful and fascinating.  Unfortunately we weren’t allowed to take photos inside so you just have to take my word for how incredible the carvings are.  Also, there is a lovely chapel cat who was curled up on one of the pews, not at all bothered by all the tourists around, and letting us pat him as we went past. The outside of the chapel is just as beautiful and there were lots of interesting faces gazing down on us.

It’s actually ten years this year since the film of the Da Vinci Code came out, so in September they’re having a special outdoor screening of the film at the Chapel – that would be fabulous to go to. Of course we had to stop for a drink and cake in the visitor centre – look, they had Australian ginger beer (I know, small things make me happy). 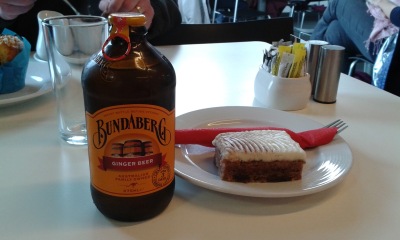 We then wandered down to the cemetery for a look – well it would have been rude not to visit as we were so close. It’s a mixture of neat areas that are still in use, and large areas that nature is slowly taking over. Here’s a few of the lovely carvings and the resilience of nature. 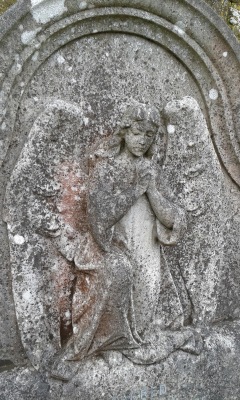 Our final stop on this magical mystery tour was at the Kelpies at Falkirk. These are two amazing sculptures based on the mystical shape shifting creature from Scottish legend. Kelpies are believed to lurk around rivers and lochs, usually in the form of horses, and they try and lure people to their death. They are also there to symbolise the impact that horses had on industry along the canals. They are 30 metres tall and weigh 300 tonnes each. 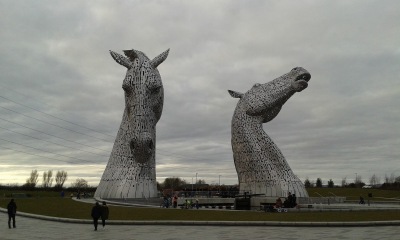 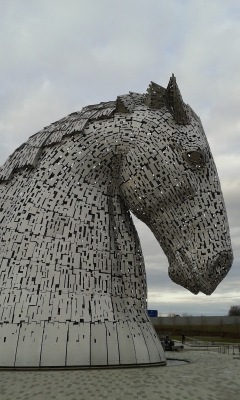 It’s amazing how much detail has been achieved with metal – you can almost imagine that at any moment they’re going to burst out of the water as whole horses. 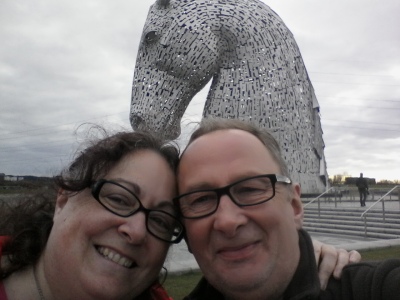 When we sat down to have a drink these very inquisitive swans were being brave and getting close to people. There was a family near us and when one of the children asked the dad if swans could fly he replied that he didn’t know so turned to me – I of course told him that yes they could. He then asked me if the emigrate? I felt like saying that they didn’t because they had nowhere to put their passports. 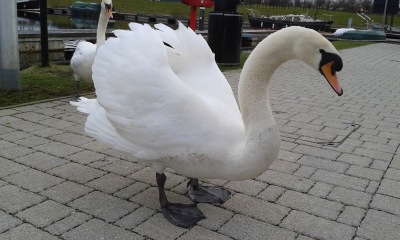 Hope you enjoyed seeing some of the interesting places there are to visit in Scotland. Until next time, be good, stay safe, and take time to appreciate the wonderful world around you.

2 thoughts on “Scarborough Fair, Rosalyn chapel, and the Kelpies”

Reposted from @savepangolinsofficial
Love this. Seen on the toilet wall in the #blacksmithgallerycafe Sheffield, Tasmania.
The face of a cat that is plotting world domination. 🌎
Gorgeous Bramble Jelly Sassy Pants.💕
Found the Neil Gunn memorial in the hills above Dingwall. Really lovely spot with a great view.
Love this time of the year when the heather is in bloom.
Reposted from @pangolincrisis
Fabulous walk to Loch Glass today - we're both looking rosy cheeked and windswept. 💕
Lovely coffee and cake break at the fabulous @tarmachan_cafe.
Latte with a root beer chaser in the sun - perfect afternoon with my beloved in the sun. 💕
Lord Rocky Horror watching TV a little too closely.
Gorgeous flowers at @kaleyardatboath, beautiful in the sun. ☀️