The closing stages of the blogging from A to Z challenge and we’re up to Y, which for us is Young at heart. We try really hard not to take ourselves too seriously and I think we’ve both got a touch of the Peter Pan inside us (though I’m more of a Tinkerbell). 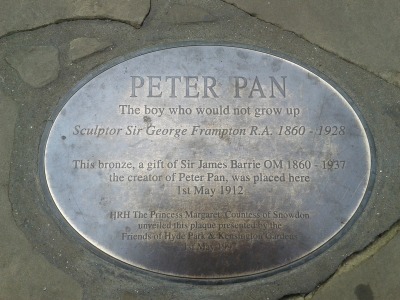 My beloved can never resist instruments made out of everyday items that you often find in play parks – I think he’s a frustrated musician. Here he is doing a bit of drumming at the Horniman Museum and below that he is playing the xylophone at Butterfly world. 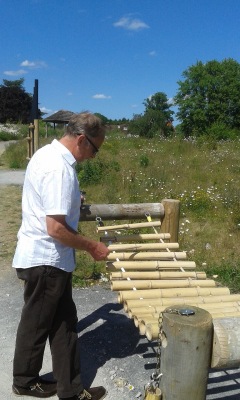 Despite just having a big birthday with a zero at the end, my husband is a big kid at heart – he has been know to grope the odd statue but here he is pretending to be a statue on an empty plinth. I should’ve taken the opportunity to grope him.

Give us a beach by ourselves and our inner child mixed with our competitive nature comes out in the form of sandcastle building competitions.  The first two we built at Fossil Bluff beach, Tasmania in 2004, and when built we took pictures without us in them and asked my parents to judge the best castle.  Shockingly they chose Ken’s. 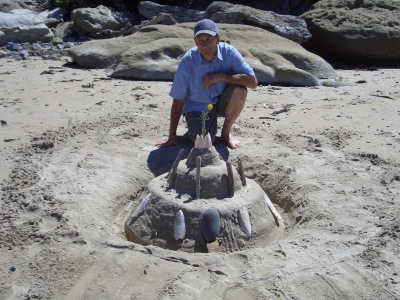 A few years later when we were on Luskintyre beach in the Outer Hebrides these were our efforts. I think I win for decorative efforts, and Ken wins for pure size. It’s so relaxing sitting on the sand creating a castle – it takes us right back to childhood. 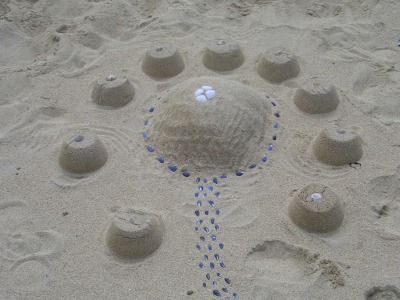 At the Chertsey Country Show they had this fake cow set up with a set of teets for kids to have a go at milking a cow – look at who’s having a go, and look at the very relaxed older gentleman behind him who was giving him advice. 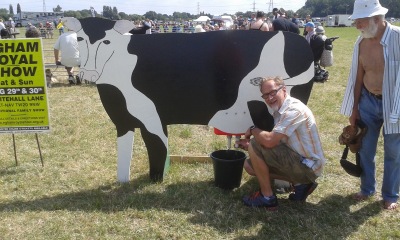 When we’re out and about on our wanders we do act a bit silly at times, but we’re big fans of the silliness.  The below photos have been repeated in several places around the world – one taking a picture of the other. 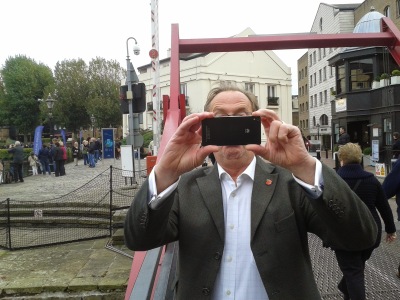 Whoever made the below sign is obviously very young at heart – it was in the toilet of a train I had to travel on. I love the thought of someone trying to flush another person’s sweater down a train toilet. 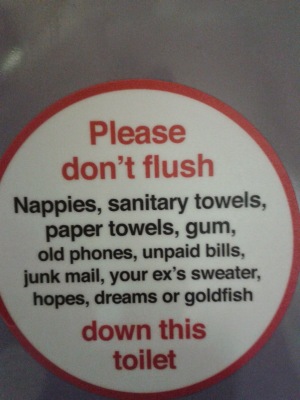 This picture was taken at the Roald Dahl museum which is perfect for kids of all ages.  This height chart shows that I’m the same height as Mrs Twit, one of his many characters.

Climbing up a fallen tree over a lake is definitely the act of someone who is a great big kid – I kept trying to get him to go back further but he didn’t fall for it.

One of the moments that I really love is when my beloved gets down on the floor with the brats to help them choose toys out of their toy box. It’s so sweet, he picks things out and asks them their opinion before giving it to them (my craziness must be rubbing off onto him).

Anyone who has read much of our blog will know that we’re a fan of coffee and cake, and the ultimate of course is Afternoon Tea. We had a fabulous chocolate inspired afternoon tea in London and among the wonderful treats were yummy marshmallow lollipops and something that turned Ken’s tongue purple. 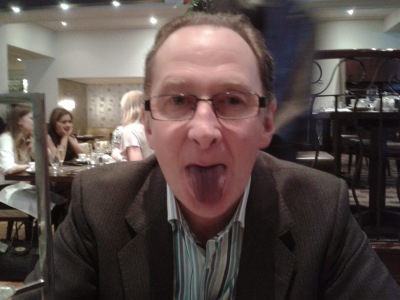 When we were in Budapest we went for a walk to Margaret Island which is a beautiful green space where only buses are allowed.  You can hire a lovely little electric cart and drive around – Ken had to give his drivers licence to prove he was safe to take it, but as soon as we were out of site he let me take over – he’s very brave as in case you don’t know, I don’t drive.  It was great fun pootling around in our little love mobile (yes we chose the one with hearts all over it deliberately). 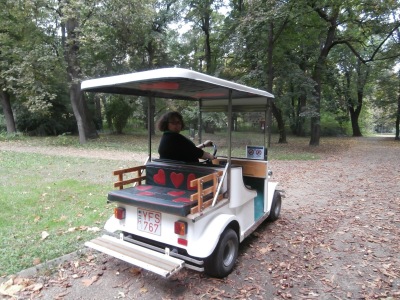 I’m a big kid when it comes to soft toys and one day when we were at Greenwich market my beloved bought me the below sock creature.  The lady we bought him off was equally as child like as us as before she would hand him over she wanted to make sure we were going to look after him like he deserved.  I promised I would and worryingly I never leave him at home when we go away for a few nights or longer, he manages to make it into my suitcase (and again, the word you’re looking for is crazy).

Another time when we were in London Ken took me into a build a bear workshop and we adopted a Koala.  When they’re making the new member of your family up you get to choose a heart for them, kiss it whilst you make a wish and then it is put into their chest before they are sown up. Koala came everywhere with us that day and the picture is from the end of the day when we were sitting having a drink on the Southbank.

Until next time, be good, stay safe, and do something this week that brings out your inner child.

5 thoughts on “Y is for Young at Heart”