My blogging from A to Z challenge post for the letter T had to be travel. Two of my favourite quotes are both to do with travel.
The first is by Andre Gide:

“One does not discover new lands without consenting to lose sight of the shore for a very long time.”

The second quote is from the J R R Tolkien poem, Not all that glitters is gold, which is recited by Bilbo Baggins:

“Not all those who wander are lost.”

I think that sometimes when you choose to travel that not everyone understands that need to explore the world.  We may not have lots of material things but I feel like we are very rich in a different way.

I was trying to work out how many countries we’ve visited and between us we’ve been to 35 – Ken’s been to 9 countries that I haven’t and I’ve been to 8 that he hasn’t, so as a couple we’ve been to 18 (did I do my maths correctly there).  I have to apologise for the quality of some of the pictures as they were taken before digital cameras and as I only just thought to do this blog I had to take photos of photos to include them for you.

When I was only 23 I travelled to the Kingdom of Saudi Arabia to work and during that year I did get to explore a little bit of the country.  One day trip we did was to the village of Dhee Ayn, better known as the marble village because of the hill that it sits on.  The village dates from the 10th century Hegira which is about the 1500’s. 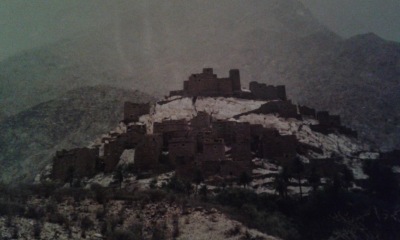 One of the sites not far from Taif (our nearest town) was the ruins of a Turkish Fort – it is claimed that Lawrence of Arabia spent time here, but I think that might be a bit like King Arthur in this country where everywhere claims him. I’m wearing my abaya which is the black overdress we had to wear over our clothes when we went out in public.

On the way home to Australia to get married in 1999 we stopped in Singapore for 2 nights.  It’s a beautiful place with so much to see, do, and experience.  I’m posing at the front of the famous Raffles Hotel with the very well dressed doorman. 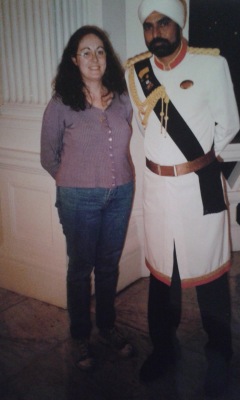 One of the outdoor restaurants we went to brought our chicken to the table raw along with a super heated bit of stone so that we could cook our own food – it was a really interesting experience.

Whilst we were home mum and dad took us to Stanley and we were able to go into the seafood factory and Ken got to hold a very large and alive crab – the man with the stick is showing how strong the claws are. 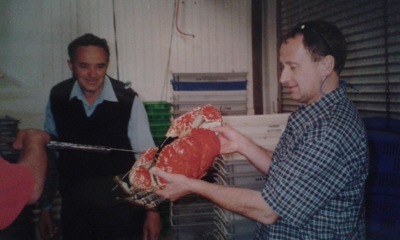 For our belated honeymoon we went to the Greek island of Samos – birthplace of the goddess Hera and you can still see the ruins of a temple to her.  We did several long walks while we were there, and one was to the Monastery of Zodohou Pigi which we had to walk up a goat trail on the side of a mountain to reach. 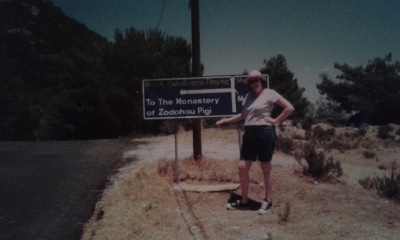 Samos is very close to Turkey so we took the opportunity to get a boat trip across and visit the historic city of Ephesus – it is an amazing place and archeologists think that only a small percentage of the city has been excavated so far.

For one of my birthdays early in our relationship my beloved took me to Lille in France on the Eurostar. We had a lovely day there and I had to have frogs legs for lunch seeing as I was in France. There’s not a lot of meat on them.

We made it to Turkey a couple of years after Greece and stayed in a small village down a long dirt road – the name escapes me at the moment.  When we travel we like to experience what the place is really like, not just what it’s like for tourists.  We found this fabulous restaurant that only locals were eating in so decided to try it – the owner Fatima, who could only speak a little English, dragged us into the kitchen so that we could choose our own fish, and then she came and stood at our table a lot to make sure we were enjoying the food.  I’m sure she gave us more than we ordered and it was all scrummy.  After we’d finished she asked if she could sit with us, preceded to tie a scarf round my head like she wears, and wanted to take us to market with her a few days later – unfortunately that was the day we were leaving so could’t make it.

Our first ever visit to Spain was staying in a villa with Ken’s sister Jean and family.  It was their youngest son Fergus’s first overseas holiday – look how cute he is being held by his uncle Ken. I can’t believe he has just turned 13.

The town of Calpe was not far from where we were staying and this is a picture of us in front of the big rock.

A year later we went to Barcelona for a few days and despite me getting the lurgy we still had a wonderful time – it’s a really lovely city packed full of culture and history. It also contains the Camp Nou, the home ground for Barcelona’s Football team, which according to my husband was an essential place to visit. It is the third biggest football stadium in the world and was very interesting to have a tour around. Look at the smile on his face – that makes it all worthwhile.

Everytime we go home to Tasmania I try and show Ken something new.  In 2004 we went down to Hobart for a few days and visited Port Arthur, the ruins of a convict site.  It’s quite eerie to look around thinking of what the poor convicts went through there and some of them did such minor crimes to warrant the huge punishment of being transported to Tasmania.

Another must see in Tasmania that I took my beloved to is the Blow Hole in Bicheno – I think he was a bit underwhelmed.

I thought I better include a couple of places in the UK seeing as that’s where I live now. The first is the Rollright Stones on the border of Oxfordshire and Warwickshire. This stone circle is called the Kings Knights and has several myths and legends associated with them. The first, which I love, is that fairies live in caves under the stones and come out at night to dance around the circle.  Witches also use the stone circle as a meeting place.  My favourite myth, which I found to be very true, is that you can’t count the stones more than once and get the same number. I counted them three times and found a different number each time – very, very weird. 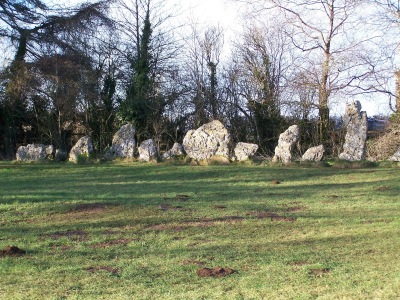 The Rollright stones are proof that whilst Stonehenge (below) may be the most famous stone circle in the UK, there are so many more with really interesting legends surrounding them.

One of our favourite holidays in the past has been to the Isle of Skye, one of the Hebridean islands.  It is such a beautiful and peaceful place to visit and we felt very rejuvenated after our two weeks there. Portree, the main town, has these really pretty houses down by the harbour, and when I look at this view I remember us buying fish and chips and sitting on the harbour wall to eat them.  It’s amazing how pictures can bring so many memories rushing back to us. 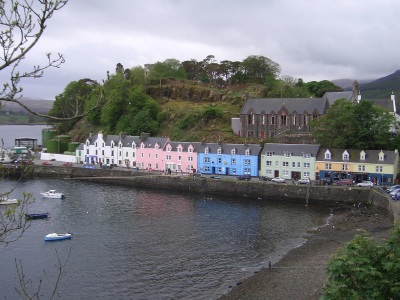 Final shot is me, half way through one of our walks, sitting and enjoying our lunch – a perfect place to be as it’s exploring this world we inhabit with my beloved.

Until next time, be good, stay safe, and reflect upon what has been your favourite travel experience in your life.