I’m not sure why, but I found it really difficult to think of a word to use for the letter E. So, after much racking of my very little brain I decided on Exploration as it’s something that Ken and I do a lot of.

When we go to a new place or country we like to wander aimlessly just seeing what’s round the next corner.  I’ve chosen a few different places to give you a taste of what sort of things we find.

First place to explore is Budapest in Hungary where we spent a few days in 2014.  What a beautiful city and such friendly people.  There are some amazing buildings, incredibly ornate and they’ve really stood the test of time.

Obligatory picture of my beloved trying on a silly hat at one of the street stalls. 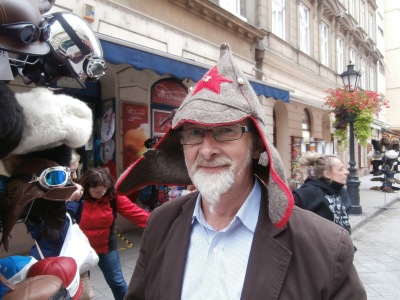 A really important part of exploring any country is trying local delicacies and being adventurous with food.  We tried lots of different things whilst we were in Budapest but this one deserved to feature as it was absolutely scrumptious.  It is Kepviselofank – basically choux pastry with cream, almonds, and toffee. 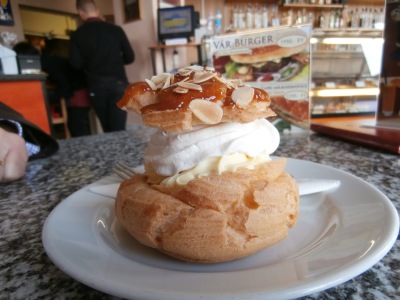 In a lot of countries around the world you find cycle rickshaws for the tourists but we think this one takes the cake for originality – the back end of a Fiat 500 mounted on the cycle mechanism.

All around Budapest there a statues both old and more modern.  The following two were my favourites – the first one was just so bizarre, Columbo with his dog, and the second because I love how the little girl is gazing at him quizzically. 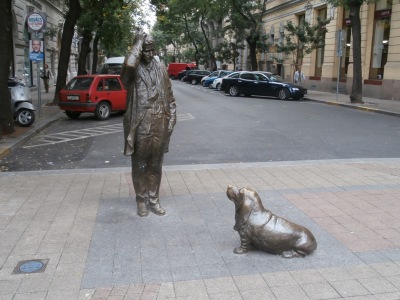 Second country in our exploration is Poland, and the city of Krokow which we visited in 2015. In the main square they have  a couple of these statues of sheep playing a pipe – I’m not sure why.

The market stalls in most countries are a great source of local food, or as we did, find a cafe in a back street that only locals seem to be eating in. 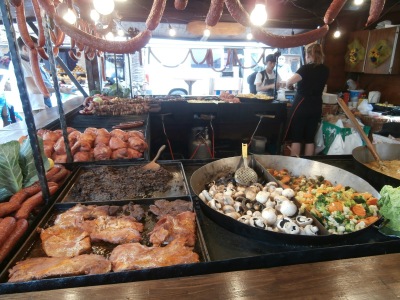 There are lots of statues in Krakow as well, but this one is the most heart wrenching.  These empty chairs sit in the square which was part of the Krakow Ghetto where the Jewish people were forced to live and were murdered here or transported to one of the horrific concentration camps.

In many cities now you will find bridges with padlocks all over them which people use to profess their love.  Krakow is no different, with this bridge being covered with locks of all shapes and sizes and yes, we added our own to it. 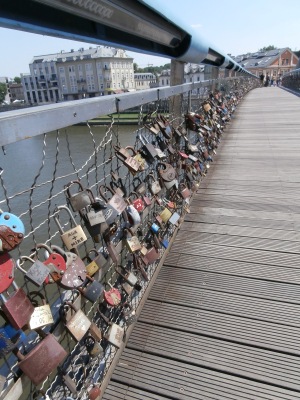 Third and final country for todays exploration is Spain which we’re currently visiting for a few days – not long enough, but enough time to get a feel for the place.  The area we’re in has lots of white buildings with pretty accessories to make  each building very individual.

Markets are a great place to see locals and I’m always envious of how fresh all the fruit and vegetables look (and huge) and I really loved this stall that was selling herbs, spices, and tea infusions.

The reason we’re in Spain at the moment is another E word and that is Elaine (and Paul), friends of ours who are living here. Picture of Elaine, Paul, and my beloved with the beautiful sea behind.

When exploring it’s great finding out about local legends.  This cave was the home of a wizard who said he would save the village from a dreadful illness if he was given a beautiful village girl.  When the wizard didn’t follow through with the cure, the girl stole the potion and saved the village before returning to the cave where a spell went wrong, she burnt a hole in her hand and then her and the wizard both disappeared never to be seen again.  Now local people when they walk past are meant to sing, ‘come out, come out of the cave Mariquita la Posa, the one with a hole in her hand’.

Always when exploring try local food – below is a huge plate of grilled prawns and fried baby cuttlefish and both were delicious.

Finding hidden gems is a great part of exploring anywhere, and at first glance this looks like a derelict building but look closer and you notice the fabulous faces that have been painted on there. 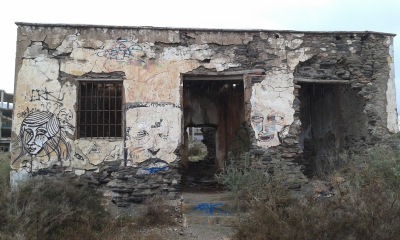 Remember that exploration isn’t neccessarily about travelling to a different country, it may just be walking down a street or road that you’ve never ventured down before, and seeing the unexpected.

Until next time, stay safe, be good, and explore a little bit more of the world you live in.

25 thoughts on “E is for Exploration”