Today we went into London without my trusty map and just wandered aimlessly, ducking down alley ways whenever we saw something interesting. We started at Waterloo station, and as it’s so near headed to the south bank to have lunch. We’d wanted to try out Wahaca for a while so that’s where we went. 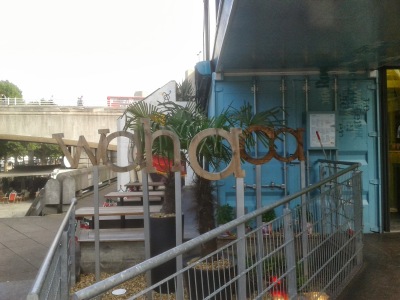 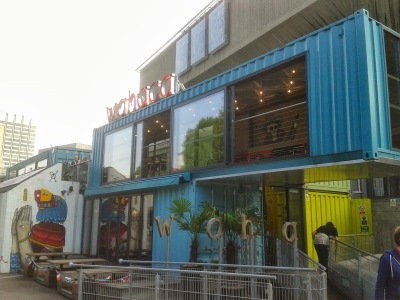 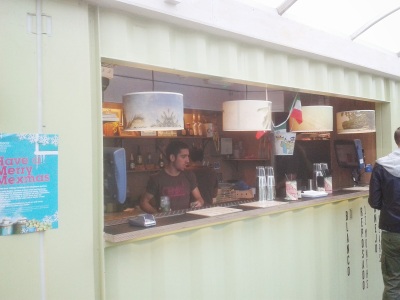 Wahaca is a Mexican restaurant in 8 recycled shipping containers – there are several Wahacas but this is the funkiest. The food is fabulous, based on Mexican street food, and tasted even better with the scrummy tequila cocktail I had to wash it down. When we got the bill they brought it with what looked like a pack of matches – you know the type, they used to be given out in bars back when smoking was more prevalent (thank goodness that’s gone). But no, these are bits of card with chilli seeds attached so that you can take them home and grow your own chillies, which is a lovely idea.

After we’d eaten we headed along the south bank where there were lots of food stalls today – good thing we didn’t have dessert at the restaurant as we came across some very decadent looking cakes, so thought it would be rude not to try them. 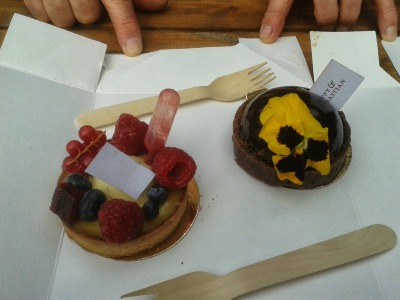 As you can probably guess, Ken’s is the one with the fruit on it.

I’ve taken piccies of some of the stalls and street performers so that you can get a feel for what it was like – I only wish I could share with you how incredible everything smelled. 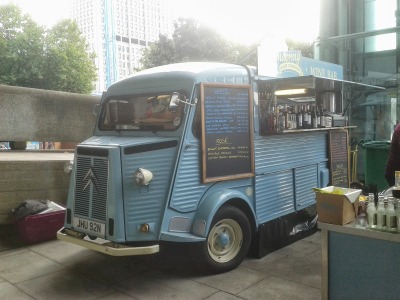 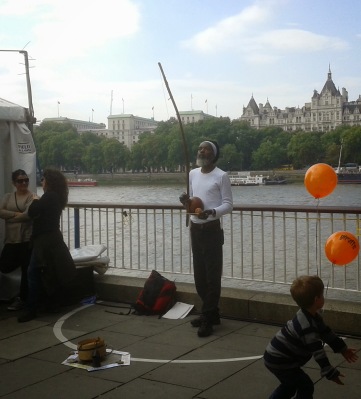 When we left the south bank we went past a church which had some lovely mosaic sculptures in the grounds, but what was really lovely was that the gardens were being used for games by locals.  They even had a couple of sumo suits and were having great fun with them.  If we hadn’t just eaten Ken and I would have offered to have a go. 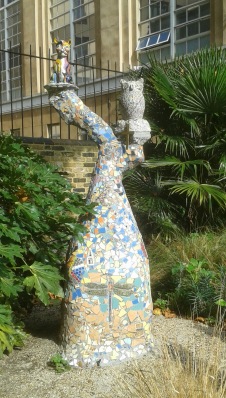 Now I may just be imagining things, but in the above sculpture of the owl and the pussycat is it just me that thinks the owl looks like a koala?

Later in our walk we stumbled across an antiques and fine art fair that was being held in Berkeley Square (the one where the nightingale sang) and these sculptures below captured our attention.  They are humans with animal masks, and some animal features as well – it was all about our inner animal, apparently. 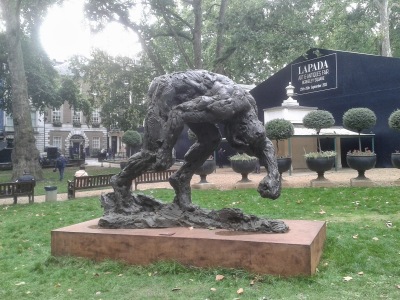 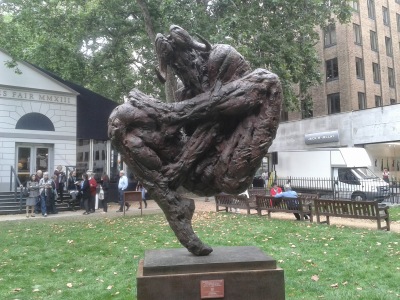 It’s amazing the old buildings that are hidden down back streets and the interesting facades that you see when you bother to look – I know I’ve said that before, but it still amazes me the bits of London that so many people just rush by or never take the time to explore.  Here’s just a few interesting buildings for you to enjoy. 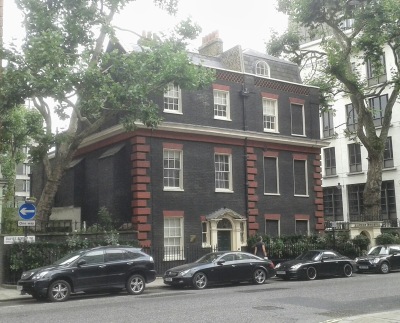 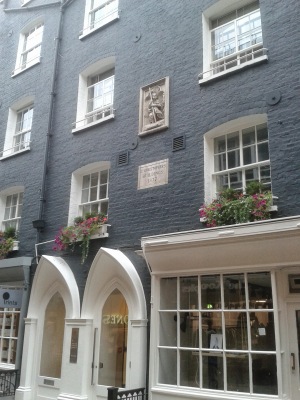 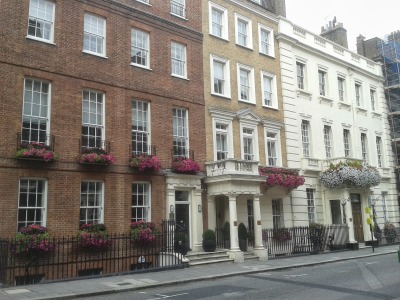 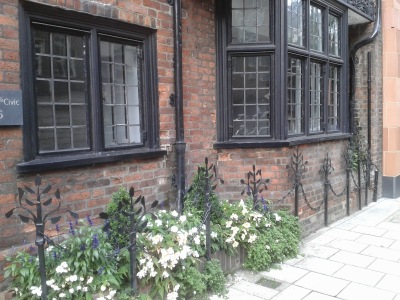 One of the shops we walked past when going down one of the posher shopping streets, was Victoria’s Secret – there seemed to be an awful lot of men loitering outside.  I’m not sure if they thought they might see women running around inside in lingerie or if they were just enjoying looking at the lingerie.

We also went for a walk down South Molton Street which has got some very posh shops in it, and is great for people watching – lots of men in oddly coloured trousers paired with tweed blazers, and lots of hair gel – do you get the picture?  Not nearly as gorgeous as my beloved – see below.

One of the hidden areas we came across which we’d obviously walked past many times before, was St Christopher’s Place, which is down an alley off Oxford Street, and is lovely.  It’s got restaurants, cafes, and lots of unique little shops. 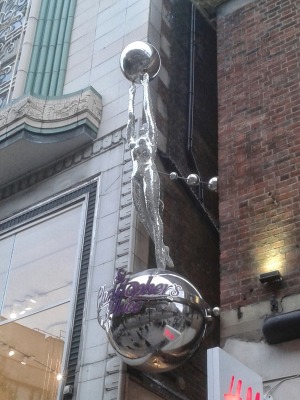 I couldn’t resist taking pictures of the two owls below, they were in the window of a men’s tailors – so cute, especially the one with the beanie on. 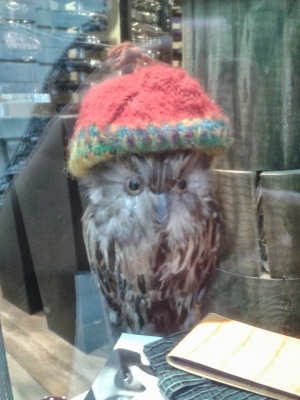 We’ll definitely be going back to this area as I’m sure it will look great at Christmas time with all the decorations up in the shops and down the alley.

To finish the day we found a lovely cafe in Green Park Street which is upstairs in an open area which must be a blessing to all those who live in flats nearby and for people who work in the local businesses.  Again, the buildings around are absolutely stunning and the trick is to squint and imagine what it was like over a hundred years ago. 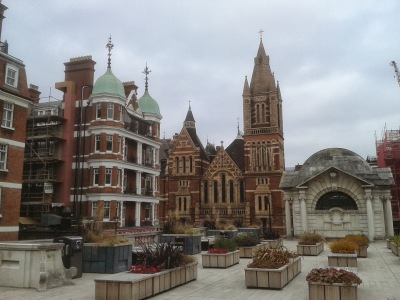 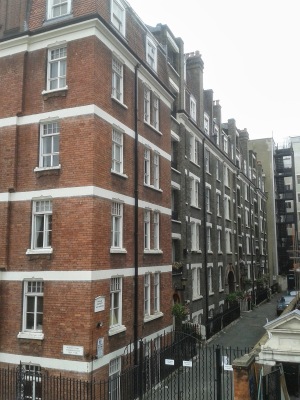 We eventually got back on the underground at Bond Street Station, which is on Oxford Street.  We’d had a great explore, and I can’t say how far we walked as I’m not sure exactly where we went – sometimes that’s the best way.

That’s it for today – until next time, be good, stay safe, and look after each other.

P.S:  To finish pictures of a couple of doors which I loved because they’re so bright and colourful – enjoy.