Yesterday mum was kind enough to take us for a drive down the coast to Stanley which is in the area known as Circular Head, or more appropriately the gateway to the Edge of the World.  On the way we made a detour to the Table Cape Lighthouse and Look Out – it was such a clear day that we could see for miles. 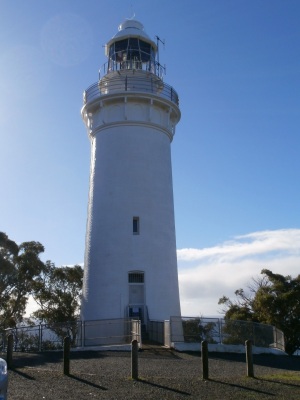 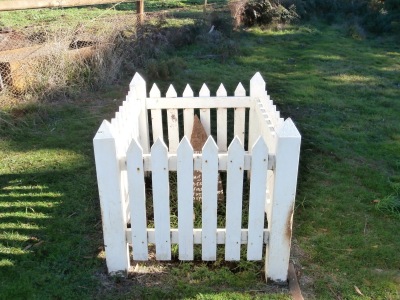 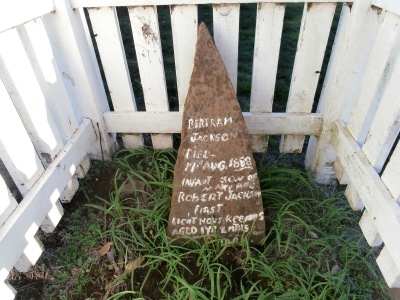 We continued our drive around table cape, stopping at another good vantage point to take a photo looking west towards our destination of Stanley – if you look really closely you can see the Nut in the distance between two of the nearer hills. 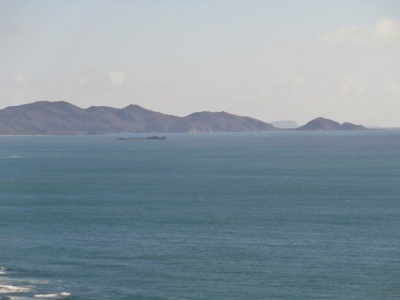 When we stopped to take the above photo we had the pleasure of some very motley sheep’s company – a disgraceful state they were in, didn’t they know we’d come all the way from England to view the beautiful Tasmanian flora and fauna.  It looked like some of them were only half dressed – very cute. 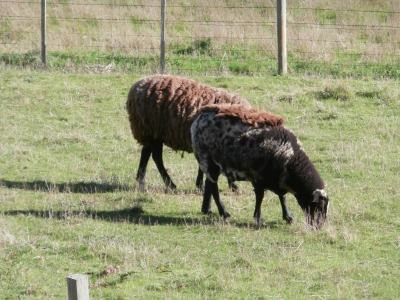 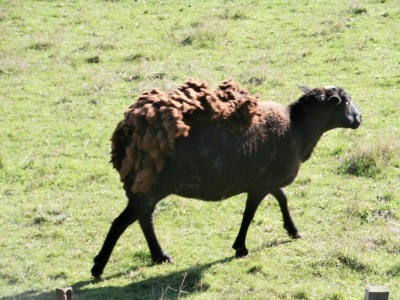 Eventually we made it to Stanley and guess what one of the first things we did was?? Coffee and Cake!!  We went to a lovely cafe called Touchwood which is behind a gorgeous gift shop and for a change I wasn’t the only one having the unhealthy looking food.

There are three things I really love about Stanley (did I mention it’s one of my favourite places to visit).  The first is the beautiful colonial architecture that is everywhere you look, the second is of course the Nut which towers over the town, and the third is their respect for penguins – there are signs around to warn people to take care of them.  Just realised I hadn’t explained what the Nut is for those that aren’t familiar with Tasmania.  Just like Table Cape it is a long extinct volcano, or really a lava lake to be more accurate, and it is 143 metres above sea level.  There is a chair lift that goes up it in the nicer weather, and it’s well worth it as the view from the top is amazing – you can walk up but the track is rather steep.  We did see at least one brave soul walking up – let me tell you now, he probably got blown all the way to Victoria from up there as it was windy enough down at street level.

Here are a few pictures from around the town to show you how pretty it is – if you’ve never visited then next time you’re in Tassie you must. 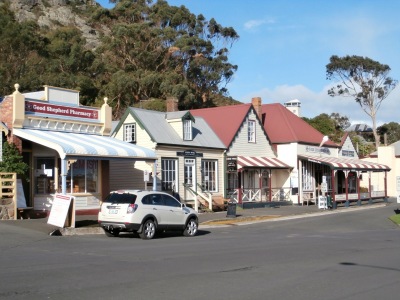 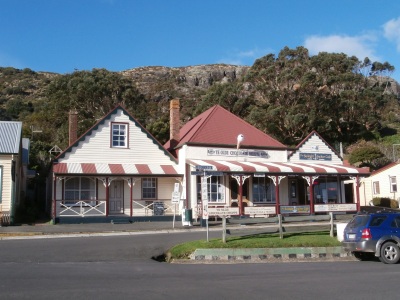 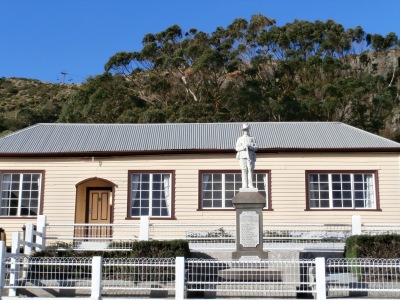 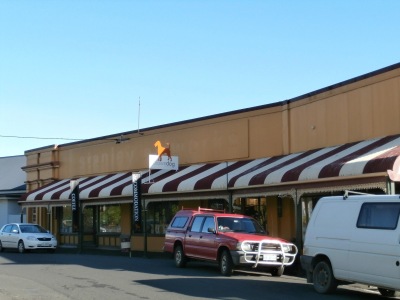 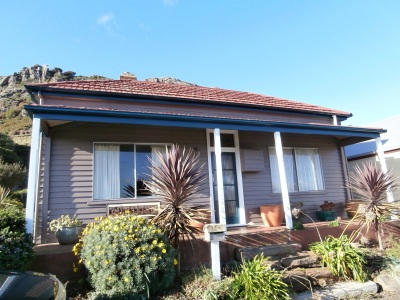 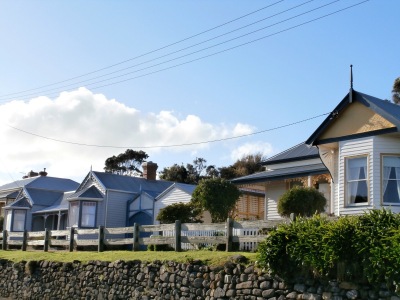 Now for the photos of the penguin signs – just so cute, though my favourite penguin thing in Stanley has been painted over, and that was a penguin crossing, a tiny little striped path across the road which was only big enough for the penguins. 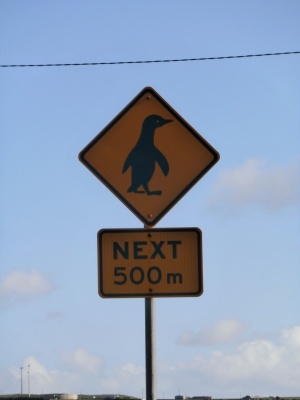 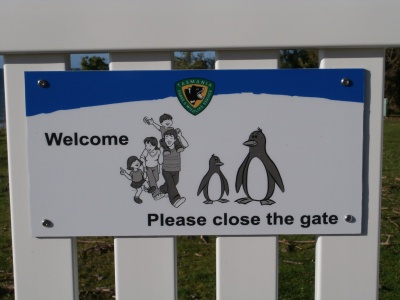 Now I know the sensible ones amongst you will read the above sign as saying that humans must shut the gate to protect the penguins, but me, I read it as whoever goes through the gate, humans or penguins, must shut it.

The last time we were in Stanley was on our trip home in 2010, the trip of my infamous back injury, and because of this Ken wouldn’t let me step foot in the Stanley cemetery as that’s where I first felt it twinge – I had to take a photo for you to see though as it’s such a pretty cemetery, sitting below the Nut right on the beach.

The picture below is of a very famous house in Stanley – it is where Joseph Aloysius Lyons was born in 1879.  For the less knowledgeable amongst you, he has been the only Tasmanian to ever be Prime Minister of Australia. 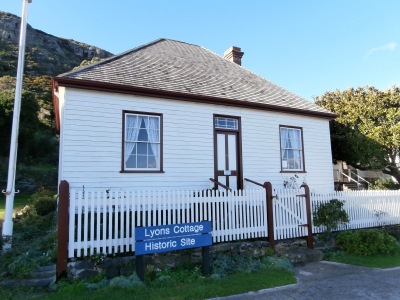 If you look closely enough in the picture below, you can just see Table Cape peeking through the hills, so the reverse of the earlier picture – showing our journey’s beginning and end. 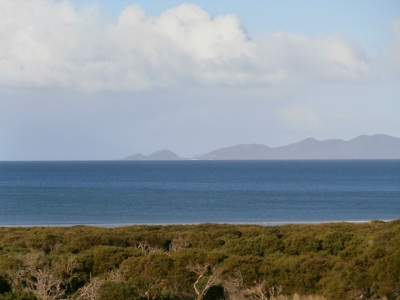 That’s it for today – we hope you enjoyed a look around another beautiful part of Tasmania and maybe has inspired you to visit yourself.
Until next time, be good, keep smiling, and eat a cake – you know you deserve it.
Pamela & Ken
xxxxxxxxxxxxx
P.S: Final shot of the Nut for you to enjoy. 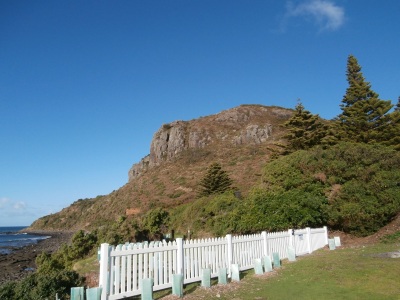 So wonderful to now have a refill shop on our doorstep in Nairn, @thehighlandweigh
Beautiful stained glass windows at Dunfermline Abbey. 💜
Fabulous mural in Comrie - tribute to Fife's mining heritage. Created by @donna_forrester_
Wonderful wander around the old town cemetery next to Stirling Castle. So much history, including headstones dating back to the 1600s. 🪦
Beautiful Culross in Fife - for fans of Outlander, a lot of scenes were filmed here. Lovely day out exploring with my beloved and Bramble Jelly.
House of Bruar lit up in festive lights.
What a fantastic show - if you get the chance, go and see Six. Full of great singing, laughter and energy.
Waiting for Six the musical to start @edencourttheatrecinema
Lovely cinnamon maple latte at @fionaswholefoods in Grantown.
Autumn in the Cairngorms. 🍁🍂
Fabulous sweet treats from @o.delicefrenchpatisserie based in Avoch. 😋
Bramble Jelly getting very up close and personal. 💜