Last weekend we went to Woburn Abbey (the site of Ken’s magnificent Car victory) to do a deer walk.  We made sure we got there a little earlier than needed so that I could show Ken round the gardens – he was quick to find a friend.

It was such a glorious day with blue sky and sunshine, and there were even some butterflies out in the garden.

When it was time for the walk we were met by tea, coffee, and biscuits (some in the shape of deer which seemed a little bit odd) and then the head deer ranger gave us a talk about the deer park which was really interesting.  We got to hold the antlers to see how heavy they were – I didn’t realise that they lose their antlers every year, and each year they grow back bigger and stronger, but with the same basic pattern.  They had antlers from the same deer ranging over several years to show us. 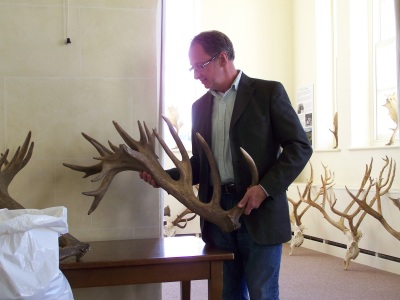 We then went on a two hour walk around the deer park with the head ranger whilst he explained what breed of deer we were seeing – they have nine different breeds in the park!  There are over a thousand deer in the park, and they have a park in New Zealand as well to help maintain the species in the event of any disease ever striking the park over here.

The grounds of Woburn Abbey are beautiful and it was nice to get to see the house from a different perspective.  The deer rangers work six days a week, but for that they get to live in a house within the grounds which must be very special.  I took a lot of photos, but here are a couple of my favourites. 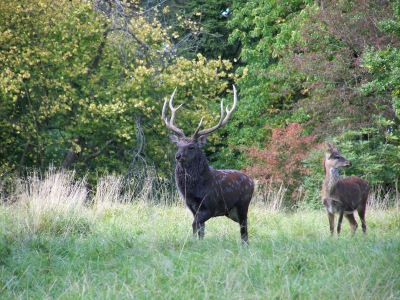 It’s mating season, so all the stags are being very noisy and trying to out bellow each other – the noise is amazing.  They also do things to try and make themselves look bigger like digging their antlers into dirt and bushes to add volume to them, and rolling in mud to add mass to their bodies like the lovely looking chap above. 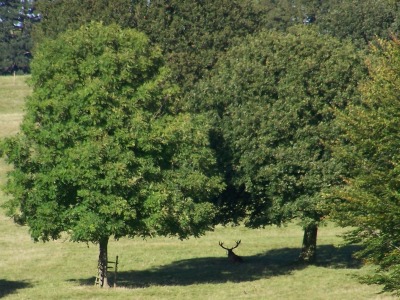 Everywhere you looked around the park there was the sight of antlers, stags sitting off by themselves and groups of female deer’s huddling around elsewhere.  There was a very interesting smell in the air, which could only be described as a mix of musk and pee.

As we were finishing the walk it was getting towards dusk and the grass was covered with cobwebs which looked really mystical.

At the end of the walk we were given lovely soup and bread – a fabulous day and I would definitely recommend it to anyone that lives within driving distance of Woburn.

That’s it, so look after each other and keep smiling. 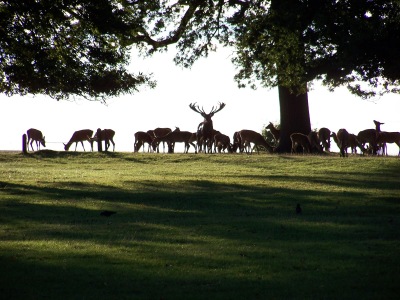