This weekend we went to the World Championships of porridge making – yes, you read that correctly, a World championship. The town/village of Carrbridge where the competition is held has a population of less than one thousand and yet they have competitors from all around the world converge here to celebrate the humble bowl of porridge.

Before we entered the arena, we of course stopped to have breakfast (it was only 10:30am) and with my lovely latte I decided to have porridge as it seemed only right – Ken always has porridge at home so he went for something different. 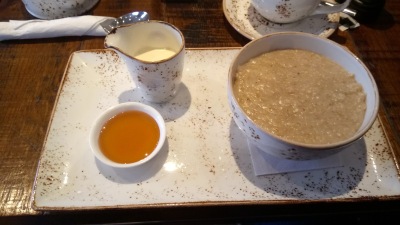 The porridge makers all walked down the centre of the town with a pipe band, then stopped in front of the hall to have a toast (with whiskey of course) to porridge, before heading inside to start the competition.

The gentleman in the middle of the picture with the red vest and hat on is last years winner from America.

There were competitors from the UK and Ireland, but also Russia, Sweden, Holland, Switzerland, Iceland, and the USA. 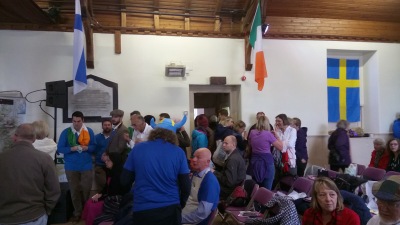 This is what they were all competing for – the Golden Spurtle. A spurtle is basically a wooden stick for stirring porridge and has been in use since the 15th century.

This very cute little bear was on the trophy table so we presume it is given to one of the winners.

The room was set up like this, with tables around one half of the hall and the rest of the hall set up with seats so that people could sit and watch the cooking. The traditional porridge has to be made with three ingredients – untreated outmeal, water, and salt, and they are given half an hour to produce it in.

The eventual winner, after several heats, was Ellinor Persson from Sweden.

There is also a speciality porridge category where porridge must be the main ingredient in a sweet or savoury dish. There was tasting going on in the back room, which we didn’t try as apparently one of them was porridge with haggis. The winner of the speciality porridge was Per Carlsson who was also from Sweden, and he did a sweet porridge with cloudberries, orange peel, and whipped cream.

Another competition that takes place in Carrbridge during the year is a wood carving one – we didn’t make it this year but will go in the future. In the park there is this beautiful seat that was put in this year to commemorate the 300 year anniversary of the bridge in the town. It’s absolutely incredible with so many different things carved into it.

Lots of different Scottish animals – the bird on top is an Osprey, and you can see a deer, a wildcat, and down the bottom is a very cute badger. 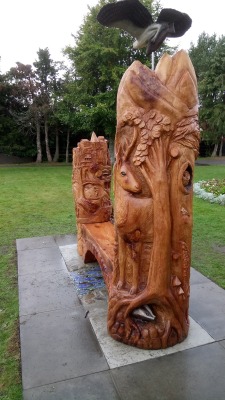 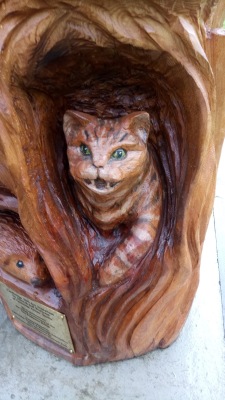 A steam engine – we think it might be the train we went on from Aviemore (Posh Afternoon Tea).

Cute little fairy door at the bottom of one of the columns. 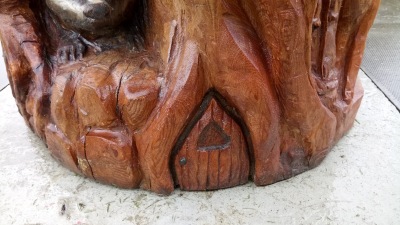 The same little bear that we saw on the judges table – I love that the porridge championship is part of the carving. I also love that he is sitting in front of his door.

We went for a drive around the area to find some more of the carvings that are dotted around – there is even a map with the carvings on it so that you can find them all. Here’s a selection for you to enjoy. 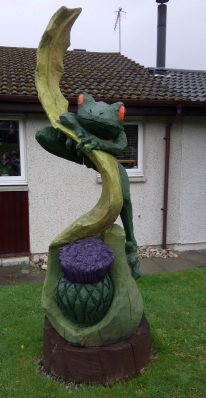 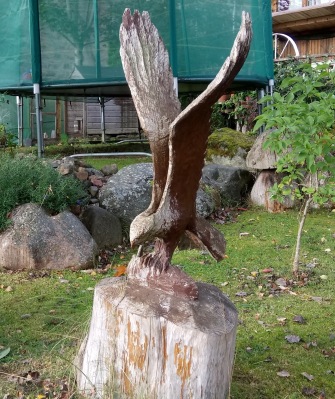 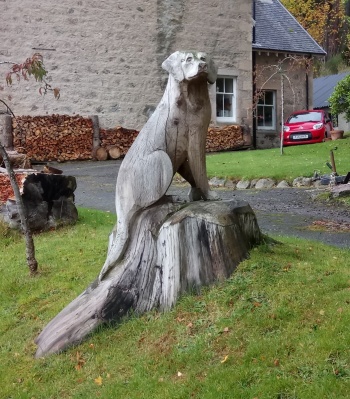 My beloved found another old vehicle to peruse – thankfully he declared this one beyond help.

This is the bridge that is 300 years old – it’s not in use anymore.

On the way home we did a slight detour past a very picturesque loch, with all the heather fading into a pinky brown now. 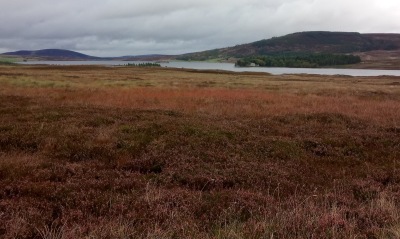 It was a wonderful experience visiting the porridge championships, but Ken is most disgusted that a Scotsman didn’t win. I’ve told him he’ll have to practice and enter next year to try and claim back the pride of Scotland. I even bought him a spurtle from the championship to practice with. 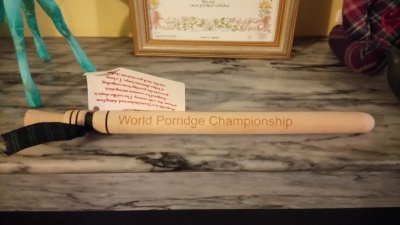 Until next time, be good, stay safe, and have a really wonderful week.

P.S: Princess Cookie Cat padding on her bed – she always looks a bit drugged when she does that.