This week our landlords gardener told Ken about a lovely coffee shop on the road to Grantown that we’d never visited, so today we remedied that very quickly. The Coffee Lounge at Dava School House serves Cairngorm Leaf and Bean coffee and very scrummy cakes. It’s decorated in a really nice style with lots of natural wood and stone with quirky additions. 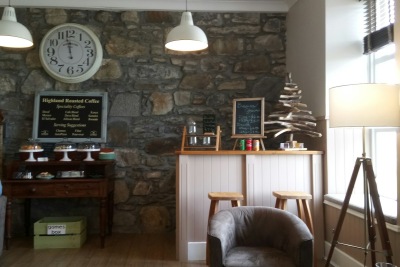 I loved this clock, with the missing piece of the face attached to the pendulum. 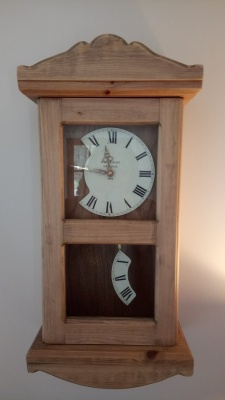 When we left the cafe we headed to Lochindorb which is a nearby loch with a ruined castle in the middle of it. It’s a great place to see lots of bird life and in the picture below is a fairly well camouflaged grouse – I’ve zoomed in for the picture after this one. 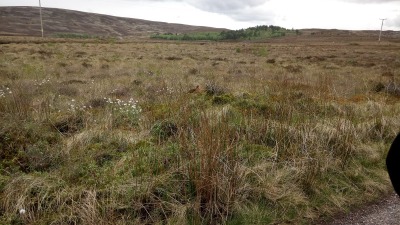 I’m not sure if she was sitting on a nest or just staying still in the hope that no one would see her. 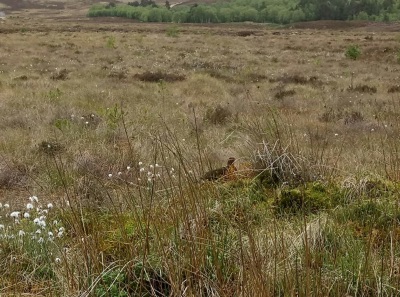 Lochindorb means Loch of Trouble in Gaelic and it is in the very desolate landscape of Dava Moor.

The castle in the middle of the loch was built in the 13th century and was inhabited by Scots and English during it’s troubled life which ended in the 15th century.

As it’s spring there were quite a few baby birds around including this family of ducks – there were at least eight babies and it’s a good thing Ken didn’t decide to record me as I sat looking out the window making oohing and awing noises for ages. I love baby animals as they’re such cuties.

The other thing that we found really strange was the gulls that were nesting on the ground across the moor. I wanted to get a picture for you but everytime we stopped the car they all flew up into the air ready to dive bomb us if we got too close. As we looked across the moor there were little white dots where the heads of the gulls stuck up amongst the ground cover.

After a nice drive around the loch and communing with nature we headed for Logie Steading which is a rural shopping village. It has a great cafe and as it had been a few hours since the last coffee and cake it was time to refuel our energy levels. I had this delicious looking creation which was a mini banana loaf with caramel sauce on top of it. 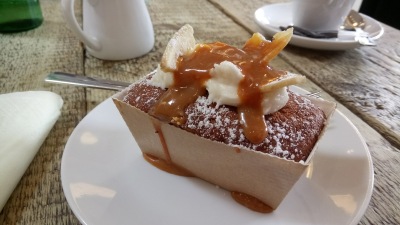 There are lots of window boxes and plant troughs around the area and they are all gloriously in bloom – loved these as they were purple. 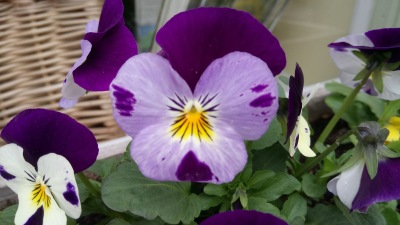 It’s been way too long since I’ve been able to post about a nice toilet so was glad to find something today to share with you. These flowers were in the ladies toilets and they’re beautiful as is the message with them. On the card about saving the bees it says; For the bee, the flower is the fountain of life, for the flower, the bee is the messenger of love.

There’s a fabulous second hand book store at Logie Steading and I always go and see if there’s any interesting books about cats, and yes I found two today, one from the sixties and one from the seventies. Ken found another great book for me and of course I had to liberate it from the shelves – it’s a book of traditional Australian ballads which I’ve been trying to sing to Ken so it’s no wonder he’s just gone to bed.

The last picture I’m going to share with you is one of the  book ends on a shelf in the book store – it’s a monkey, wearing a fez and a waistcoat, sitting on books and reading a book, and it’s fabulous.

Until next time, be good, stay safe, and have a really good week.

6 thoughts on “Cakes, a castle, and a monkey in a fez”