In our previous post, a trip on the whiskey line, the train had a brief stop at Drummuir which we thought looked really interesting so after our train trip we went and found the station again. 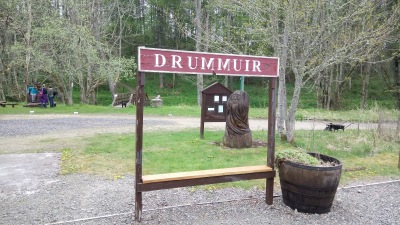 At the station there are two wonderful carved wooden statues, one of an old man and one of a story telling chair, which I absolutely loved. I think Bramble looks really cute sitting in it. 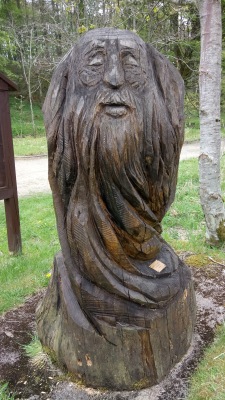 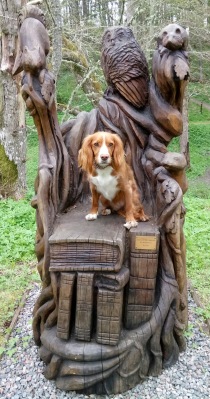 The chair is set up with seats around it and I really hope it gets used by groups for storytelling. 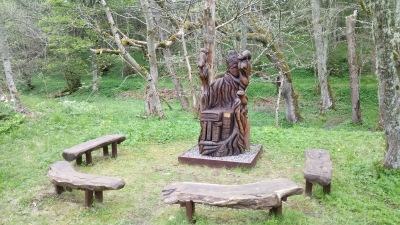 The walk through the woods is really lovely and runs along the railway siding. The station is part of the Isla Way walking route which is 13 miles between Dufftown and Keith. It’s one we’re going to go back and do one day, especially the part between Dufftown and Drummuir as I’m sure we could do that in enough time to get the train back to the car. 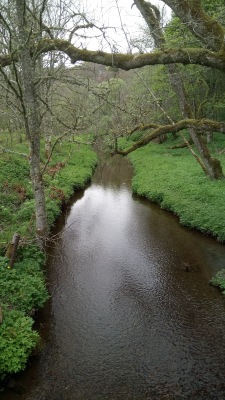 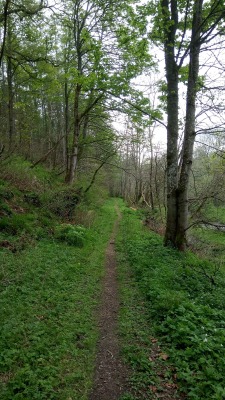 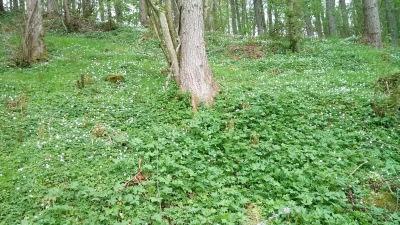 After our wander through the woods we went to a nearby church that we had spotted as it looked like it had a fabulous graveyard. The war memorial outside the church is really lovely but has several of the same surnames which is really sad in such a small community. 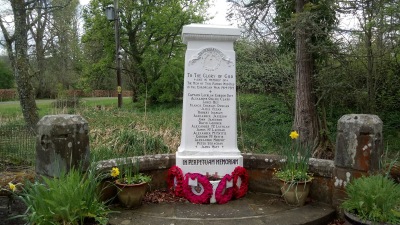 This is Botriphnie Church which was built in 1816, though the original church on this site was built in the 12th century. 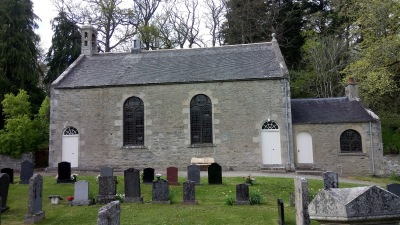 The graveyard is a really interesting mix of the old and the new. Some of the really old headstones are propped up around the walls and others are covered over by the grass.. 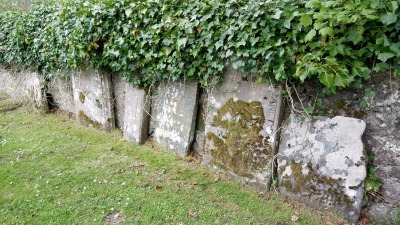 We found this headstone which dates from the 1600’s and we loved how it looks like they just kept adding people wherever they could fit the writing. 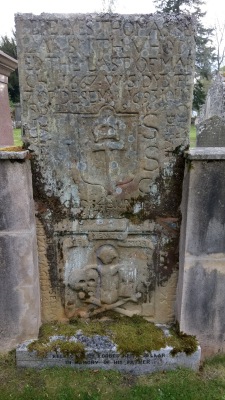 This headstone is an old example of recycling – on one side there is the inscription for whoever is in the grave and then when you look at the back there is an upside down headstone which is obviously older. See, recycling isn’t a new idea. 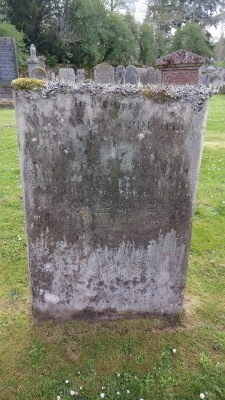 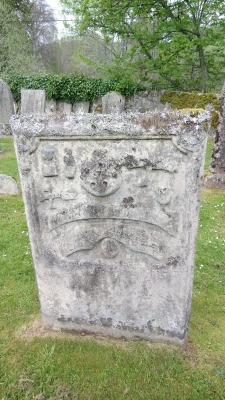 Here’s a couple of the graves that the grass is taking over – some of the writing is visible on the one on the right which shows it is from the 1600’s. 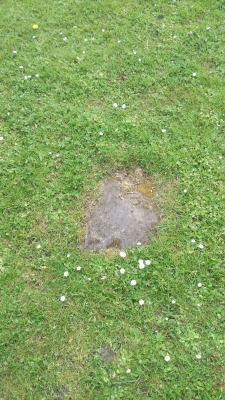 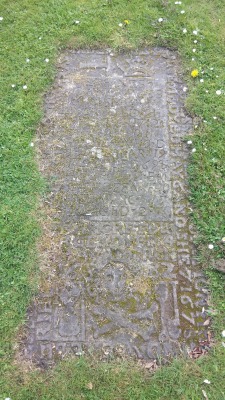 Here’s another headstone from the 1600’s that was propped up against a wall with the moss slowly enveloping it. 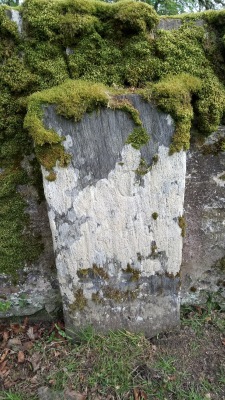 I have to give a warning before the next two photos – WARNING, WARNING, ugly angel/cherub alert. The duo aren’t the prettiest, but the next one is quite disturbing and I think it was done by someone who has never carved a face in their lives. 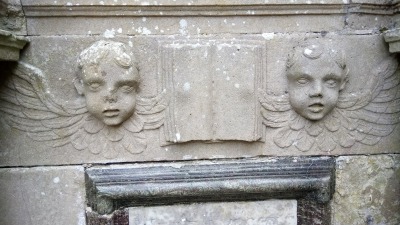 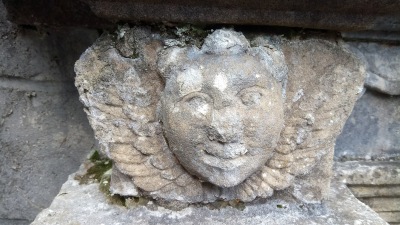 Two of the gates in the churchyard – I love old metal gates, they add a touch of atmosphere to the setting. 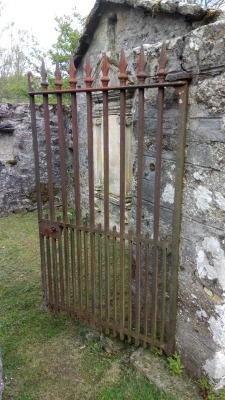 There weren’t very many celtic crosses but these two are lovely with beautiful carvings on them. 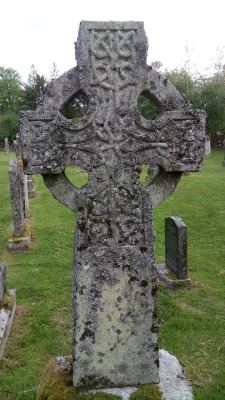 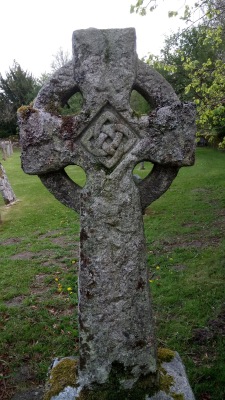 This bench in the church grounds is to the memory of Reverend Ranald S R Gauld who was minister of the parish 1995 – 2014. We were intrigued by the odd socks carved into the bench so I googled the minister when we got home and discovered that he did indeed wear odd socks when he preached. There are two other benches to commemorate him that are in the grounds of other churches in the parish, and yes, they have odd socks on them too – I think we’ll have to go and find them one day. 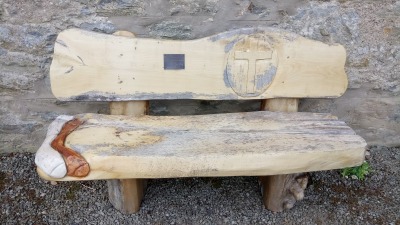 One of the modern headstones for a lady who died in 2012 had a beautiful inscription from her husband; “she was the love of my life and my best friend”. So lovely and heartfelt.
As we walked around the churchyard there was a really strong smell of garlic in the air, which was due to all the wild garlic which was in bloom beside the little stream. 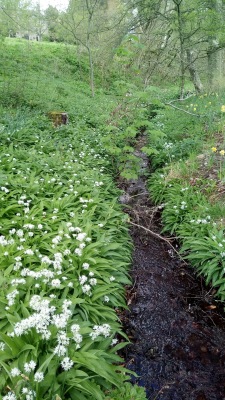 Just a few random shots from our journey home – landscape view, a lovely house that’s in desperate need of some tlc, and a car in my favourite colour. 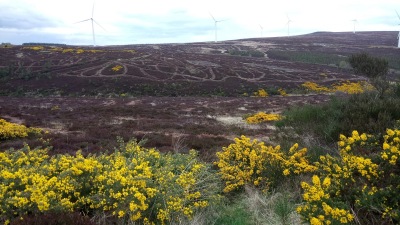 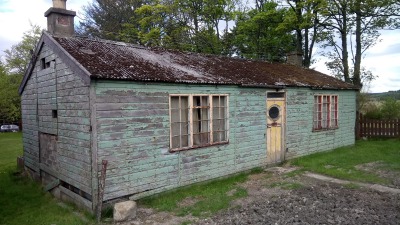 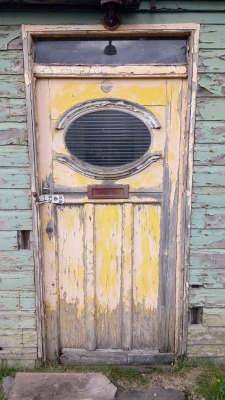 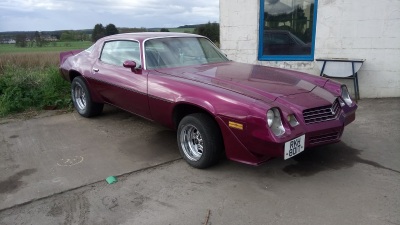 It was a great day out in a lovely area which we would definitely recommend you visit.

Until next time, be good, stay safe, and be kind to yourself this week.

4 thoughts on “Ancient woodland, ancient graves, and a pair of odd socks”

Reposted from @savepangolinsofficial
Love this. Seen on the toilet wall in the #blacksmithgallerycafe Sheffield, Tasmania.
The face of a cat that is plotting world domination. 🌎
Gorgeous Bramble Jelly Sassy Pants.💕
Found the Neil Gunn memorial in the hills above Dingwall. Really lovely spot with a great view.
Love this time of the year when the heather is in bloom.
Reposted from @pangolincrisis
Fabulous walk to Loch Glass today - we're both looking rosy cheeked and windswept. 💕
Lovely coffee and cake break at the fabulous @tarmachan_cafe.
Latte with a root beer chaser in the sun - perfect afternoon with my beloved in the sun. 💕
Lord Rocky Horror watching TV a little too closely.
Gorgeous flowers at @kaleyardatboath, beautiful in the sun. ☀️