Scotland has seen many battles during it’s history and 39 of these have been officially recognised as historic sites. Famous battles include Bannockburn (1314), Killiecrankie (1689), and the strangely named Skirmish Hill (1526). The one I’ve chosen is Culloden Battlefield because it’s only 12 miles from our home. 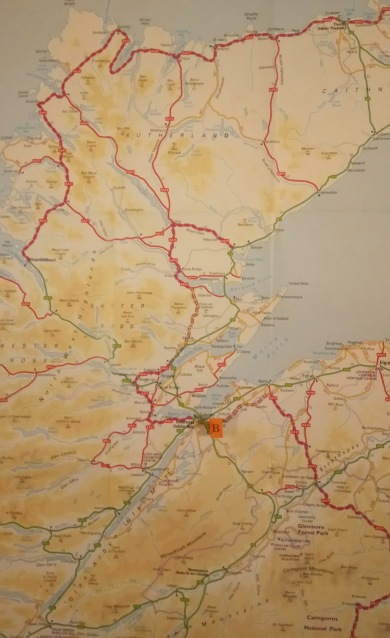 The battle of Culloden took place on April 16th, 1746 and was the last battle to be fought on British soil.

It’s a very stark place and it is important to remember that it is a war grave – so many highlanders lost their lives and it was the end of a way of life for the proud Scots. The ground was marshy and caused problems for the Jacobites as they preferred to charge their opponents, many being struck down by cannon fire or bullets in the first few minutes of the battle.

Before you walk around the battlefield make sure you go through the visitor centre as it has an excellent display about the lead up to the battle and what the outcome meant to Scotland. 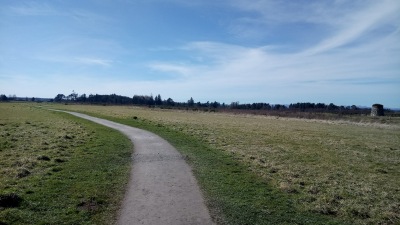 The map of the field shows where each of the clans stood at the start of the battle – I’ve taken this photo from where members of Clan Forbes stood, which is who I’m descended from. I don’t know if they’re my direct ancestors but it did make me feel really sad knowing that they fought in vain and probably died quite close to this spot, as the exhibition shows how this end of the Jacobite line was hampered by deep boggy ground.

The line where the Jacobites stood at the start of the battle is marked by a line of blue flags.

During our visit I did my bit for nature and saved this common toad that was sitting in the middle of the footpath and before we got to him he nearly got wiped out by a wheelchair and people walking over the top of him without noticing. I tried to encourage him to jump off the path but ended up picking him up and putting him in the undergrowth.

This is the memorial cairn that marks the area that the graves of the highlanders are. It was built in 1881 by Duncan Forbes (need to research and see if he’s an ancestor) who also set up markers on the graves of the clans. 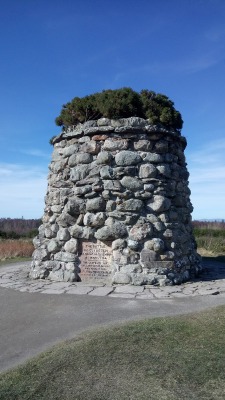 These are the markers on the graves of the clans – some have the name of a specific clan on them, but there are several that just say Mixed Clans.

This is the well of the dead where the Chief of the Macgillivrays fell. 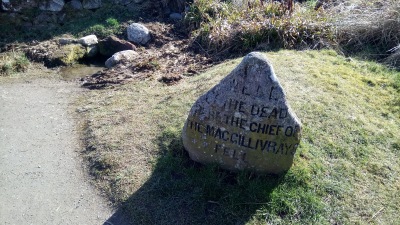 The red flags mark where the British troops stood at the start of the battle, heavily outnumbering the Jacobites and with much more deadly weapons.

This stone simply says, Field of the English, they were buried here.

After the Jacobites were defeated Bonnie Prince Charlie escaped capture, went into hiding and eventually headed back to France and died in Rome in 1788. Prince Charles is buried in St Peter’s Basilica, Vatican City.
The Duke of Cumberland became known as the Butcher Cumberland as he hunted down any highlanders that he suspected of supporting the Jacobites, hanging men, burning down homes, killing farm animals, and imprisoning others, including women, before sending them to London for trial – many died on the journey. Supporters of Cumberland nicknamed him Sweet William, and because of this many Scots won’t have this flower in their gardens. The Duke is buried in Westminster Abbey.
Hope you’ve found this post interesting – tomorrow we’re visiting a Clootie Well.
Before you go, why don’t you pop over to the A to Z blog and see what my fellow bloggers have come up with for the letter B – click HERE to visit.
Until next time, be good, stay safe, and think about what your ancestors may have been through for you to be where you are today.
Pamela & Ken
xxxxxxxxxxxx

18 thoughts on “B is for Battlefields”