Time for Top Ten Thursday and this week it’s the top ten things we’d save if our house was on fire, knowing that all people and pets are safe. I found this one really difficult purely because my first thought would always be Ken and the furbies and making sure we were safe, but then I started thinking about the things that can’t be replaced and have lots of emotional value, and then I had to cut my list down.
1. Passports and marriage certificate – these are very important to me as I’m a foreigner in the UK and have never taken British citizenship, even though I’ve now lived here for 20 years. I carry two passports as my visa to stay in the UK is in my old passport and the home office told me I may as well just carry that rather than get it transferred. Lots of people think I should get citizenship and don’t understand why I don’t, but in my heart I’ll always be Australian and I think the last verse of the poem My Country by Dorothea Mackellar says it all:
An opal-hearted country,
A wilful, lavish land
All you who have not loved her,
You will not understand
though Earth holds many splendours,
Wherever I may die,
I know to what brown country
My homing thoughts will fly. 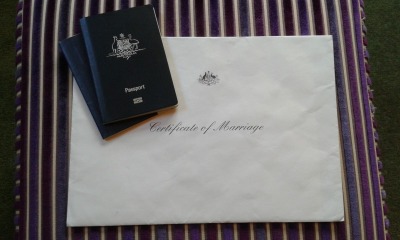 2. Photos – in these modern times most of our photos are backed up to the cloud or whatever system you use, but a lot are still just in photo form, or saved on an external hard drive so I would have to grab those as they are very important. Photos provide so many memories and can provoke so many emotions – this picture is a perfect example. It’s our beautiful Bertie Boo on his GRAND DAY OUT the day after we found out he was dying from cancer and a week before he left us. This picture always makes me smile but it also makes me a little sad.

3. My rings – unfortunately at the moment I can’t wear my engagement and eternity rings due to my finger being a bit fat, so I would definitely want to save them. My engagement ring is very special to me as my beloved chose it himself and surprised me with it when I least expected it.

4. Mum’s quilts – my mum is a quilter so all over our home is evidence of her skills in many different forms of patchwork, from wall hangings, cushion covers, bed quilts, and placemats. I would have to grab as many as I could, but the first two would have to be the two picture ones below, one in memory of Bertie, and the other mum did for my 40th birthday. 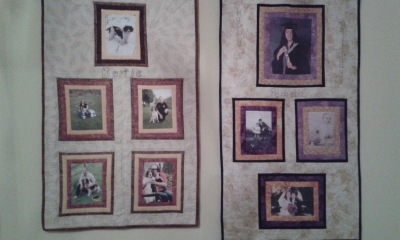 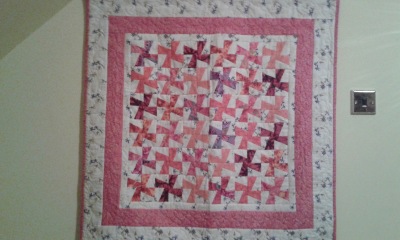 5. Bertie’s Ashes – we’ve already had him cremated once, so I don’t think we should do that to him again. I have this dream that one day we’ll have a garden of our own that we can bury him in, so he has to be grabbed if a fire is threatening. 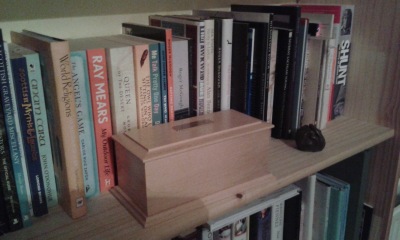 6. Our wedding guest book – this was a book that we had for our guests to write messages in for us, and there are some real gems in it. Sadly, at least 5 people that attended our wedding have since died so those messages mean even more today. There are funny messages, reminders of past hangovers (to Ken), suggestions for a happy marriage, and welcomes to the family from so many.

7. Soft toys – I know, I’m a little immature at times, but a lot of my soft toys have a lot of sentiment behind them. There’s my white teddy bear Brewton who is named after the US Navy ship that my friend Shea was on when we met in Tasmania in 1988 and he has traveled all over the world with me. The teddy bear (below) that Ken got me from the build a bear workshop and had a birth certificate made for him saying that his name is Hawley (my maiden name) and was born in Tasmania, and the sock monkey (below) that we bought at Greenwich Market and the stall holder made us promise to look after him before she would hand him over. I could go on as so many have a story behind them and are very precious to me. 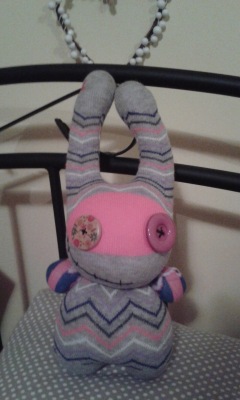 8. Ken’s shell box – this is a little box that Ken decorated when he was young and we rescued from his mum and dad’s house after they died. I thought as his mum had kept it all these years then it deserved to be treasured for the rest of our years. It’s a bit beaten up around the edges and is missing a couple of shells, but it is a wonderful little box and I would definitely have to rescue it from a fire.

9. My poetry – I’ve been writing poetry since I was in my teens and have many notebooks and journals full of my musings, and I would hate to lose them. There’s a lot of my growing up years written in those books and more recently a lot that have my beloved featuring heavily in them.

10. Indalo Man – I did a post about the INDALO MAN for the blogging from A to Z challenge if you want to read more about him. This one is very precious to me as it was made by my friend Elaine and is particularly poignant as yesterday was her funeral. He hangs outside our bedroom door, at the top of the stairs and we see him many times a day. He may be number 10 on this list but I think he would be very high on my things to grab if the house was on fire.

And now for a bonus one for you:

11. Memories – something that all of us can grab if we were ever threatened by a house fire. That is one of the things that a fire can never take from us and those are the memories that you’ve created within that space. One of my favourite memories happened when I wasn’t even in Scotland, and that was Ken unpacking the house and sending the following picture to me in London with the caption, “where’s Pamela?” He’s looking in the box for me. 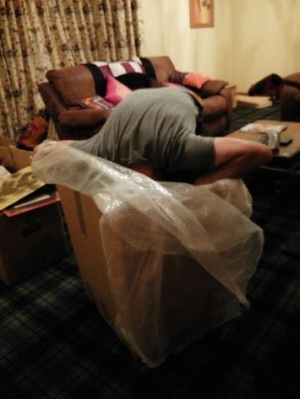 So there you have it, my top ten of things that I would save from a house fire – why don’t you pop over to Tamara’s blog, Confessions of a part-time working mom, to see what my fellow bloggers have put in their lists – click HERE to visit.

Until next time, be good, stay safe, and I wonder what you would save if you had to choose.