This weekend was a hodgepodge of mini adventures. First, I was working on Saturday as we had a kid’s day at work – what do you think of the addition of pink pipe cleaners to my glasses? I also had purple pipe cleaners in my hair but I took them out before I forgot and went out in public with them. 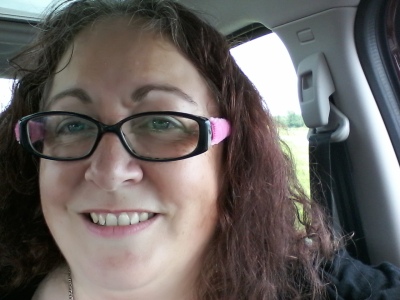 After my day at work we called into the Culloden Battlefield visitor centre as they had a craft fair on, and who can resist one of those. In the pavement they have a lot of clan coats of arms and we found Clan Murray, which is Ken’s ancestry.

Here’s a picture of some of the stalls – it doesn’t look like much but they were spread over such a large area that I couldn’t fit them all in. 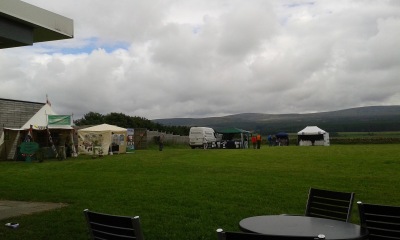 I did indulge and buy a few things including the gorgeous tea cup Pixie and magic wand that are pictured below (yes, still crazy). The pixie is a native of the highlands and loves collecting things, so I think I must have a bit of pixie in me.

Whilst we were having a sit down in the visitor centre I was quite fascinated by this wall hanging with a recipe for short bread. Firstly I was surprised to read that Scotland and England pounds are different, and secondly I was very intrigued as to what a mutchkin is. Of course I googled it and according to the Collins online dictionary it is: a Scottish unit of liquid measure equal to slightly less than one pint.

On Sunday we went into Inverness and managed to squeeze in a visit to a graveyard – how fabulous. The graveyard was around the Old High Church which is the site of the oldest congregation in the city. There are some really interesting headstones and despite it raining it was a good wander.

Below is a headstone for a Forbes family which is part of my ancestry – there were quite a few in the graveyard so I took photos of them all so that I can see if they match anyone on my family tree.

A couple of gravestones from the 1700’s. 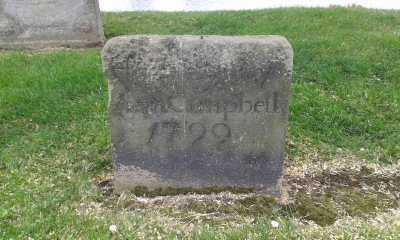 Interesting doors in the church – we’re not sure what the top one was for as there’s no way to get up to it. It’s a door to nowhere.

The next two headstones have a hand holding a scroll – the scroll represents the persons life and the hand shows the angels holding the life.

After the battle of Culloden in 1746 the churchyard was used to execute prisoners and the headstone below was one that was used to line up the prisoners for shooting.

Interesting headstone with a plough on the bottom.

View from the graveyard looking over the River Ness and the pedestrian bridge.

Another 1700’s headstone that has been renewed – obviously still important to someone. 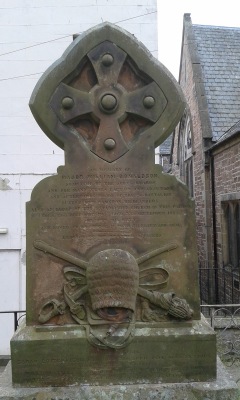 Final picture is my beloved in his new t-shirt that I had made for him. It has pictures of four things on the front that represent him – dog walking, cake, cars, and housework!! Before anyone thinks I’m being mean he absolutely loved it. Also, there is a hidden message printed inside the hem which I can’t reveal but just to say it’s something that Kath used to say to Kel in Kath & Kim (it’s an Australian comedy). In case anyone wants to get one for someone, it’s from not on the highstreet and there are loads of pictures to choose from. 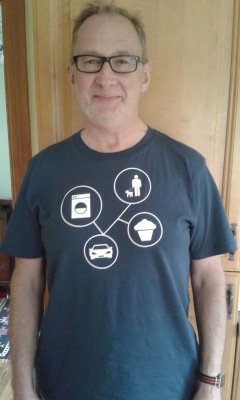 Until next time, be good, stay safe, and take time this week to do something nice for yourself.
Pamela & Ken
xxxxxxxxxxxx

2 thoughts on “A highland hodgepodge”