Our first walk around London for 2013 – Marylebone to Covent Garden.

I love Marylebone High Street, it’s very upmarket, so lots of little designer shops and it’s great for people watching. One of the shops had a French bulldog in the window which was very cute.

There’s also some lovely organic farm shops, one of which we had brunch in – perfectly cooked poached eggs.

Part way down Marylebone High Street there is the site of an old graveyard which has been turned into a park – I think it’s really lovely and I really like how they still keep a lot of the old headstones around the edges of the small park, and on a plaque (see picture below) they commemorate some of the notable people that were buried there. 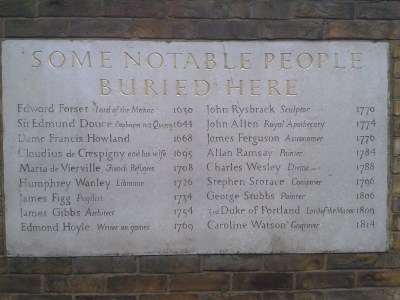 ﻿﻿﻿I love the mad things you see when you’re not really looking for them – why a cow on a balcony??  We don’t know as there was nothing there to suggest what it was doing.  The other thing I love is when you see signs with incorrect spelling that’s not done deliberately – now I know that I’m not the most accurate person in the world, but the sign below is particularly bad. 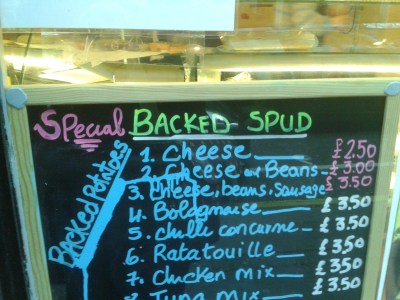 The worst thing about this is that they stole the letter ‘C’ from the word Jacket as there was another sign which I couldn’t quite get a picture of with ‘Jaket Potatoes’ on it.

On the way to Covent Garden we always stop in Neal’s Yard to soak up the atmosphere – it’s a tiny little piece of London, but really lovely in a very Bo Ho (bohemian) sort of way.  Very colourful – in fact when we took mum there she took a picture of a lady with purple hair.

Covent Garden is always lovely to wander around especially at this time of the year because the Christmas decorations are still up – very lovely.

Now I’m sure I’ve featured the next place before, but we thought it would be rude to be so close and not go into BB’s, the tea room that we love.  As it was the end of the walk we definitely deserved a cake ( I’m sure I’d used enough calories to justify it).﻿

That’s it for today – stay safe, keep smiling, and we hope 2013 is a really special year for you and yours.